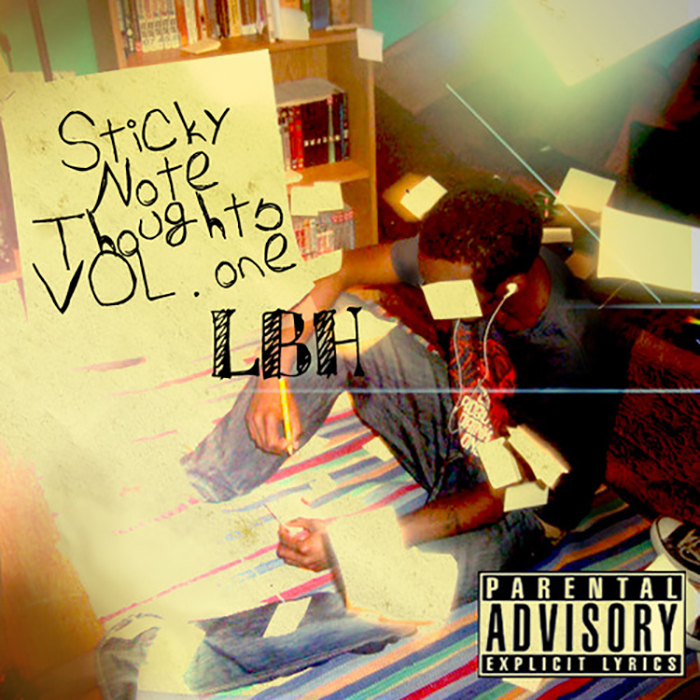 As “The Birth” began the new mixtape from LightBulbHead…I instantly found myself enjoying the energy, passion and lo-fi atmosphere of the music and vocals. With a confident approach and a quick, stylistic take on rap – LightBulbHead immediately begins to impress on Sticky Note Thoughts Vol. One as “The Birth” takes shape and lets this emcee make his presence felt as the record starts to spin…

Much credit to LBH for making the full effort to perform each of these songs from beginning to end, hook & verse, no matter the result – and some will prove to be better than others of course. We all have our strengths…in the case of LightBulbHead, it’s song-writing itself, and rapping; when it comes to the hooks…like on early tracks “Flying” and “Heavens For Me,” you can hear he’s just slightly wide of the mark and tone he’s looking for. There are a few brown-notes per hook…that makes it tough because you want to love these tracks with the way the subtle music and beat work their magic…same with the verse, those are solid too. Again – the man is clearly a rapper…a hip-hopper at heart – and that’s where the strengths of each of these tracks are. LBH just needs a little more time, a little refinement and these hooks would smooth right out…no problems I’m hearing here that are resolved with just a little more time and honesty from those working alongside him to let him know when it’s 99% and not 100%. A track like “Flying” is nearly a frustrating one…everything about this track should be working 100% – it’s got some excellent writing and a massive hook…and I’d wanna know what the rush was? LightBulbHead isn’t so far off the mark that he’d need to farm out the hooks to an underground superstar gueststar – he just needs more time to make what he’s doing perfect – so WHY didn’t he get that opportunity?

Where these hooks work well for him, the tracks rise-up in quality overall with both verse and chorus locked-down like that. Check out a track like “Muscle And Bones” – LBH takes this one for a smooth-ride with excellent, complex and tricky-rhymes delivered perfectly in the verse; the chorus is equally effective – I might not argue that it’s completely perfect, but I would certainly argue that it has that quality that gives your ears a reason to return. The singing parts of the track’s beginning are quite boldly human…I think there’s no issue with the sound on “Muscle And Bones” – he’s done really well here and once again found a stunning beat to work with. Much of the music is massively impressive…the choices that have been made here on Sticky Note Thoughts Vol. One are seriously unique to the genre and leave you with the feeling that LBH must be one ambitious dude to go after the range of sounds he’s attempting. Parts of “I Reach” work solidly…it’s actually a pretty sweet song with nothing but honest and pure intentions…I dig the freewheeling way that LightBulbHead goes after the lyrics on this one…kind of hitting up like, a modern-day Biz Markie kinda-thing here. Old-school-meets-modern-day-jazz…the singing ranges in tones flowing all over the place, but I can appreciate the real ‘freedom’ that steps into the spotlight and atmosphere of this tune…it has charm.

And wouldn’t you know it…the guy is on a roll here towards the mixtape’s middle and especially on “Like The Morning Sun” – this is as smooth as it gets! Staying in that soft-jazzy style and keeping the music solidly chilled-out as the beats and electro-samples make their way to your brainstem – LightBulbHead turns on the charisma and captivates throughout a flawless performance on “Like The Morning Sun.” Definitely a highlight on the record…it’s one of the shortest tracks, but it’s awesome from start to finish. “Breath Of Fresh Air” takes the smoothness and adds extra energy and punch to the mix. Everything about this cut works – LightBulbHead keeps it complex…it’s tough to follow him due to a pretty intense level of skill and his natural instincts to go left right when you think he’ll go to the right. The beats and music have been exceptional throughout this entire record, but he’s found an incredible gem here on “Breath Of Fresh Air.” It has a perfect balance of seriousness and straight-up FUN…you can hear how truly into this one LBH is – there’s no doubt whatsoever about just what an incredible time he has performing this song, you can HEAR it in the grooves of this recording.

Though I’m not quite sure what the overall lesson would be – it definitely seems like I should do the best I can to point out to LBH just how incredible the shorter tunes on this record really ARE. Sometimes a shorter, more focused idea can go a long, long way…”The Old Me Interlude” is a perfect example of that as LightBulbHead RIPS it up quickly over this cut that’s less than a minute long. It even has an intro that happens before he starts in, leaving him even less room to move in the track…and as a result, it’s like he’s taken four verses and sped them up into one…I know it’s only an ‘interlude’ but c’mon – that’s awesome.

I’d say you can hear a slight Kanye influence creeping in right around the point that “Shaytan” starts and again as the album hits an auto-tuned moment in “Army Of The Light.” At this point, you can hear that LBH is much more comfortable with the material – he’s confident and storming through “Shaytan” – it’s a HUGE sound and big-beat that required the dude to be leading the way and LightBulbHead ends up winning the war on this one with a rock-solid performance. “Army Of The Light” I thought turned out really well too…there’s a lot more of an entertainment and dramatic vibe that run through its first ninety seconds before the curtain drops and this track comes out gunning. I would have had this picked as a serious contender for the opening track – I think the album might have benefitted from that dramatic switch from the artistic nature of the opening and into the wildness of this cut’s second-half. Definitely as a massive highlight on this mixtape – “Army Of The Light” covers a ton of ground and claims the territory over each place, genre and style of which it roams into. Huge tune!

Another short tune that proves that theory correct once again – “Candid Camera” puts the spotlight on the quickness and precision of this lyricist. LBH has done extraordinarily well once again in creating captivating rhymes that flow fluidly and with the right energy and passion to match the words and the mood of the music he chooses. As if on cue – “One Of These Days” begins right afterwards…and one of the most powerful tunes on this entire mixtape of fifteen tracks is revealed. The writing of the hooks on “One Of These Days” still slightly outshines the performance – but 99% of the time, these are right where I’d want them to be if I was LBH…they sound honest…they truly sparkle with a stunning brilliance and any slight flaws on this gem of a track are more than forgivable. Massive fan of “One Of These Days” – definitely think that this is one of the record’s best songs and it really packs a meaningful emotional punch that cuts deep.

That focus you find on the short songs in comparison to the longer tracks is really just a matter of self-editing and really finding that courage to do what’s right for the song and the music without overdoing it all…and that’s a tough balance for any of us to walk. It also applies to albums…mixtapes that are, ahem, fifteen tracks long…sometimes they might have delivered more of an impact with less tracks. I would have probably tossed “Made For Me” or found another spot on the record for it. LightBulbHead has been on a massive roll in the latter-half of Sticky Note Thoughts Vol. One and “Made For Me” sandwiched in between the two arguably most-impressive tunes on this mixtape certainly isn’t helping it any. But yeah…there’s another good idea locked in the heart of this song…just needs a little longer in the incubator. LightBulbHead has gotta know that…I mean, he’s gotta be able to hear that some of these tracks are coming out insanely perfect in comparison to others…so if anything, consistency is something I’d expect to find him a little sharper on the next time we hear from him. “Letter To My Friends” that starts after “Made For Me” is pretty much as damn brilliant as you could hope for a track to become. I believe it uses music borrowed & sampled from The Album Leaf is it not? Whatever it is, it totally adds an emotional level and depth to the song for LBH to draw from. Reminds me a lot of the current work coming from Prince EA – the combination of message and music here is straight-up awesome. “Letter To My Friends” is sincerely personal and performed with a real commitment to the idea – loved the way this came out.

I don’t know what world you’d have to be wanting to live in to leave the bonus track, “La Manzana” off your experience listening to this mixtape. You NEED this track on there – remember I said it! A seriously smooth-groove…excellent saxophone samples lead the beat along in this final jazz-inspired hip-hop cut. Very strong writing on this record…with a little more time spent on the execution, LightBulbHead is gonna beef-up from good to great easily. The entire last half of Sticky Note Thoughts Vol. One raised up the level of the entire project and really put a spotlight on the potential of this innovative artist for the future to come…I think LightBulbHead could very well be capable of some extraordinary experiences we’ve yet to have in music – he’s wildly creative, catchy and charismatic throughout this entire record.