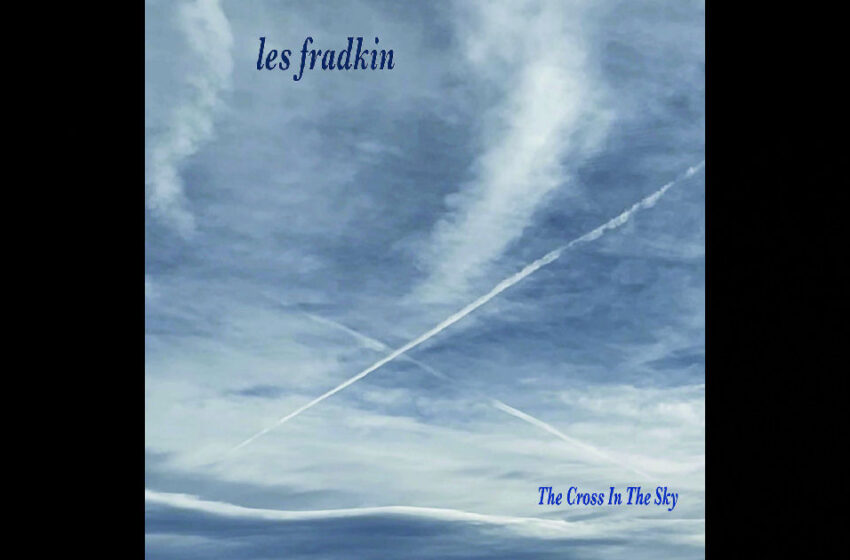 Interesting tune, interesting artist too – apparently this man rocks out with a midi-guitar – how rad is that!?!

For a moment there, I nearly expected to find myself in the thick of a more aggressive update on the old-school Billy Joel sound…which…to a degree, is probably still a fair enough comparison to make.  Les Fradkin puts a lot of effort into the melody and magnificence of “Under The Covers” from his new album The Cross In The Sky and yields solid results that draw on the epic Pop/Rock vibes found within the late 80s early 90s.  Like I’d imagine there’s every chance Les has those old Joel records in his collection over there somewhere…52nd Street…Piano Man & whatnot…with the more dramatic flair & colorfully expressive sound at work here on this single as well…I’d bet there’s been some Meat Loaf in rotation along the way as well throughout Fradkin’s time on this floating orb we’re all livin’ on together.  Anyhow…that’ll give you a loose idea of a few similarities in sound…it’s in the songwriting too though for that matter…in terms of a real classic approach to what works on a structural level, this certainly does.

Even though the drums really come through strong straight off the drop, the rest of the mix never felt like there was any kind of serious imbalance; it’s just the kind of steady pound that’s bound to take your mind off the rest every once & a while when you’re paying attention to it.  Vocally, there are fantastic things going on – I love the way Les sings, I love the harmonies, I love the ideas for where those harmonies occur – the dude knows his way around a song and how to design what comes from the mic in a way that’ll earn your attention just as much as the brightness in the music surrounding his voice.  The added brass sounds…awesome…the melody is equally endearing & entertaining…there’s a whole upbeat vibe at the core of this tune that feels genuinely triumphant, spirited, and pretty darn joyful really.  Lyrically…I suppose maybe I have the most questions in that particular department…I didn’t necessarily feel like I might have really understood what the whole song was about, but pieces of this cut certainly had no problem at all connecting & catching my interest along the way.  Part of me thought at first that we may be dealing with some type of ghost scenario – “I’ve been here all along, under the covers with you” – because I was trying to reconcile how someone might not notice the lump of another human entity in the bed when they’re trying to get some sleep.  Then I thought perhaps it’s the story of some kind of infidelity scenario, with two lovers resisting the inevitable relationship to follow so far, and this is that moment where push perhaps comes to shove…but I never felt like that fully fit either.  So admittedly…I didn’t really end up feeling like I fully knew what “Under The Covers” was all about, but that hardly stopped me from enjoying myself in listening to it.  Are you kidding me?  My favorite band has been R.E.M. for three-quarters of my entire LIFE and I still couldn’t tell ya what they were singing about.  It’s one of those things…sometimes that’s an important aspect of listening to music for some, for others it’s just not – and personally, I like a little ambiguity in what I listen to…it allows us to interpret things how we experience them, and jump to our own conclusions…it’s what makes music relevant to us in more ways than one, whether or not we’re right or wrong.  So heck no – don’t quote these theories of mine – form your own as you have a listen for yourself!  I think we’d all agree on the sentiment of this song at the center of it all though – there’s a very passionate & loving atmosphere at the heart of “Under The Covers” and in my opinion, I’d be willing to bet we all hear that on a universal scale; it’s a large part of what makes this track as charming and accessible as it is.  This song might be attackin’ us with those drums a little, but there’s no doubt that generates a pulse and energy we can truly feel too.

At the end of the day, it stands out – heck, it practically BEAMS outta your speakers as it begins – what you’ll hear is the audible definition of radiant sound – but it works, and you’ll find no such complaints from me over here on this side of the speakers.  There’s great energy, excellent melody, and a whole lotta craft in a song like “Under The Covers” and I’d be the crazy one to complain about a song with such qualities – so I ain’t gonna be the guy to do it!  There’s a really uplifting spirit on “Under The Covers,” a ton of attention to detail from the music to the microphone, dynamic & dramatic moments that are guaranteed to move you in one way or another, and a high caliber performance with production to match.  It might be on the throwback-side of sound, but I’d argue that Les is working with the timeless vibes of real classic melodies in this song…and unless things have seriously changed out there and I’m not aware of it, there’s always going to be a massive audience of listeners out there that appreciate this level of dedication to the craft, and the exceptional quality of the songwriting you’ll find on this single.

Find out more about Les Fradkin from his official website at:  https://lesfradkin.com