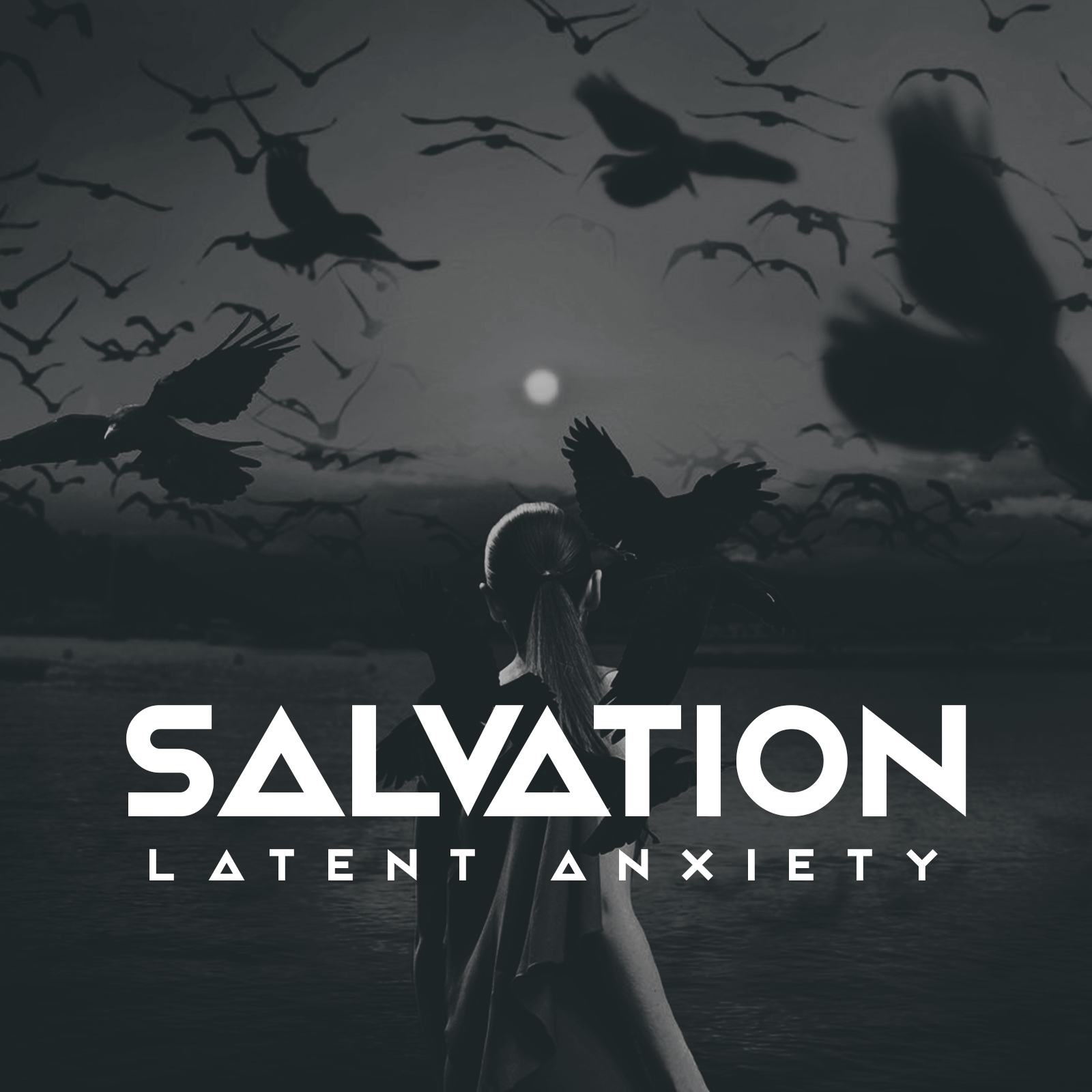 From what I’ve read and researched, the mind behind the music of this solo-project known as Latent Anxiety all traces back to one man…Ilja Rosendahl out of Los Angeles…and he’s about to make a serious amount of noise for ya over the course of some pretty lean & mean sounds on his new record Salvation.  If you continue on through his credentials…you’ll come out of it like I did most likely, dizzy from reading about scores of awards he’s picked up and the insane amount of abilities and skills he has when it comes to making music…and course, expecting something pretty spectacular on Salvation as a result!

Sound-wise – “Alone” starts the record off with big & burly electronically-inclined sounds with crunchy, distorted guitar riffs overtop.  Programming-wise, he’s done a solid job of mapping this one out with plenty of in-song dynamics, stops & starts and real punch to the production in effort to drive this song onto playlists & make an impact on listeners.  Right away you can tell that…awards or not – Ilja clearly isn’t making music with radio-play at the forefront of his mind…”Alone” has hooks, but they’re largely darker ones and perhaps right on the fringe of accessibility for many people.  Vocally…he sticks pretty closely to what’s happening in the music here…but the pacing and metering of it all is highly effective and the scale upwards on Ilja’s tones in the chorus make for solid listening.

If you tuned into the most recent episode of the SBS Podcast, you got a chance to listen to “Binary,” the lead-single from Salvation on the show.  As it was new to me at the time and I was just beginning to explore this record myself…I’ve yet to comment on it!  So first of all – it was a solid addition to a great show full of excellent music from the independent-scene…Latent Anxiety helped balance that lineup out with the dark, brooding & mechanical sounds of “Binary.”  Dig the song…composition/structure-wise, Ilja certainly knows his way around and can confidently command the studio boards as well as the instruments themselves…and writing inside a theme like this with the added factor of electro-elements really works strongly.  I felt like “Binary” was a tune that was really focused and achieved the mission for its ambition in the writing – and the added effects/backing vocals made this track absolutely cool to listen to…like the voices were bouncing from the lefts & rights as much as the music itself.

I wasn’t a massive fan of “Change The Way” if I’m being honest – which I suppose is closer to something like a punk-industrial-electro type-jam.  Guitar-wise it kinda sounded like it was in places that Rob Zombie has already been to and back again…and overall, it felt like “Change The Way” kind of drifted the furthest away from what makes Latent Anxiety unique by comparison to the rest of the material on this particular record and also to what’s already been written & recorded out there.  KMFDM or Stabbing Westward have of course gone in similar directions as well with some of their tunes in the past…I dunno…I guess I just felt like this particular rhythm/repetition combination did connect as strongly here.

“Gorgeous Mystery” was another real highlight for me personally…in this cut, I found Ilja’s vocals to match the energy, movements and pulse of this song absolutely perfectly.  It’s a pretty slick & sleek tune when it comes right down to it…the crunch of guitars with giant F/X moves wickedly with the beat of “Gorgeous Mystery” – but even as much as I liked all that…I felt like it was the subtle melody in the vocal flow that completely stole the show for me here.  I always find it incredibly interesting to hear something with this high-degree of accessibility pop-up after many songs beforehand went in a much more niche direction…it makes you realize that an artist like Ilja makes no compromises when it comes to how he sounds, but it also open to many different types of sound as well.  But clearly…from the sound of “Gorgeous Mystery” – this dude could easily write himself a radio-hit at any given time if that was what he truly wanted to do with each and every song he wrote.  The rhythm, pace and vocal-flow of “Gorgeous Mystery” have all the hallmarks of a hit song…great tune and one that shows Latent Anxiety in a slightly different but highly-effective new light.

The pounding drums of “Into Your Mind” definitely have this multi-dimensional beat ripping into subwoofers fiercely wherever you find it being played.  The main hook of the chorus on this one wasn’t exactly my favorite…but I’ve felt that way about many songs with the same end result…which is that the hook on this track actually stands out in quite a memorable way.  The use of repetition works strongly in Latent Anxiety’s favor here on “Into Your Mind” – I like the sense of urgency that the song itself has in its structure in writing…almost like you can’t tell if the main line of ‘take me into your mind’ is an earnest request or a harsh demand!  Great tones on Ilja’s vocals throughout the menacing sound of the verse…for me that was the stronger part of this tune when it came down to examining it – but I can’t deny that this hook might have gotten stuck more firmly in my head than any other on the record whether I wanted it to or not!  “Into Your Mind” sounds dangerous and on the attack musically…smart choices in how he wants this one to flow and sound vocally lead it to victory.

A lot of these tunes definitely flash the reasons as to why Ilja has been considered for/taken home so many awards for his music.  Songs like “Pirates” do a ton to highlight the pure amount of force and energy that Latent Anxiety writes into the structure – and the entire composition has a wicked intensity that runs deep.  Also for ingenuity, let’s face it…he’s done a lot of cool things with beastly & behemoth sounds – but listen to the way he breaks-up “Pirates” – you’ve GOTTA appreciate this track!  The low tones of his vocals are absolutely incredible…I mean…this is the BOTTOM of the pit of Ilja’s vocal-register – it HAS to be!  Any lower down in tone and all we’d hear is a gurgle!  Where he’s got his vocals set and sounding right now is truly impressive in both sound and performance – and throughout the mix of intensity and danger in the music of “Pirates” the writing and execution truly shine as bright as they can within the murky confines of this gem.

I’ll say this…Ilja clearly likes his sounds on the darker-side…especially when it comes to the actual tones of his own vocals…you have to imagine we can infer that from the majority of what we hear him doing on Salvation.  I’d personally challenge him on that direction a bit…because I think songs like “Gorgeous Mystery” and later here on “Rhythm Machine” really bring out that extra layer of melody into his vocals and music in a way that really works.  Similar to “Into Your Mind” in a sense – Latent Anxiety makes large use of hypnotic repetition in the rhythm of and writing of “Rhythm Machine” – in many ways it might not be the most versatile track on the entire record, but I felt like Ilja had a powerful idea here in the melody and groove…this track worked well for me.

“The Game Has Begun” features a hint of that melody and I suppose the music breaks out in a slightly brighter way here.  I like the lyrics more that I liked the way they flowed for the most part; I think the hardest thing for a singer to do is resist the natural tendency to follow what the music is doing with something similar in what’s being sung…but in certain circumstances it’s a necessary thing that’s gotta be explored in order to make both parts stand-out as they should.  On “The Game Has Begun” it just felt like what’s being done vocally is a bit too close to what’s happening in the music…decent enough song and as well mixed as the rest…maybe just a bit less dynamic or slightly riskier as a result of the choices made here in keeping the flow of both music and vocals at a parallel.

With great rhythm, melody and tone – “When The Lights Go Out” ends Salvation, in my opinion, on perhaps its most impressive of notes.  I think Ilja’s written a seriously versatile rhythm here that has a ton of space and perfect opportunities to create some incredible vocal-flows to accompany the music – and he’s nailed them in a real highlight performance on the mic at the end of Salvation.  Fantastic tone, excellent melody-line and perfect match to the energy of the music through excellent contrasting sounds – “When The Lights Go Out” ends the album in a completely inspiring & impressive finale.

Interesting artist & project for certain…the more I listened to Latent Anxiety the more I got into the record for its multi-dimensional aspects and diverse heaviness.  As I’ve stated…I think it’s pretty clear that I preferred the lighter-side of what Ilja writes for the most part – but I still found the darker-side wickedly entertaining to listen to.  What makes it interesting…again, it’s that clear choice he’s making between writing something straight ahead and something more artistic…and how instead of writing accessible hook after hook of which he demonstrates he’s clearly capable of – he goes after something a little more ambitious overall on Salvation.  Commendable stuff for sure…cool ideas in the mix here.

Find out more about Latent Anxiety through the official site at:  http://www.latentanxiety.com