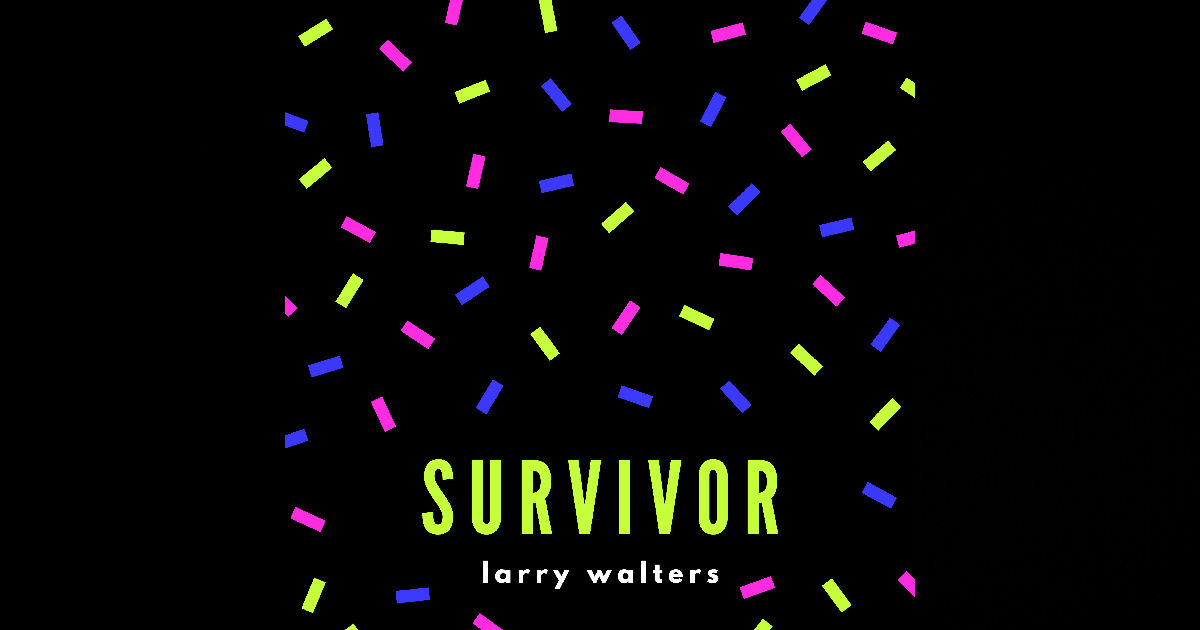 Huge checkmarks in the WIN column for Larry Walters here…these new singles are completely rad.  Not JUST rad, but highly diverse for a set of three tunes…each of these releases from 2019 have their whole own thang goin’ on…it becomes pretty clear, pretty quickly, that Walters is ambitious, adventurous, and fully capable when it comes to all aspects of his music from performance to production.  Each of these singles have their own appeal…their own ideas…their own sound, their own style – it’s not only impressive to say the least, the quality & strength of each song proves that Larry’s more than ready to deliver true audio entertainment in a wide variety of stunning ways this year with how bulletproof these songs really are.  Considering how different these three songs are to each other by comparison, you gotta admire Larry’s chameleon-esque ability to find such remarkable success within each facet of his sound & style…this is cunning Electro-based music composed with creativity & imagination in mind.

Arguably the most widely-accessible cut, I started my adventures into the music of Larry Walters with his single “Survivor” – the only tune of the three to feature a guest-star singing.  The added edge that the vocals supply to giving this cut more broad appeal to the people out there is certainly a factor for sure – but for the record, everything you’ll hear on this tune is fresh as it gets from the music to the microphone.  LOVE the vocals on this tune – Larry’s got a female lead supporting the vibrant electro & big-beat drums he’s got placed into “Survivor” – and she sounds absolutely spectacular, 100% of the time.  With unique hooks and a remarkable mix of soul & style, the balance between the strengths here is impeccable – the music completely jams with audible entertainment & catchy, dynamic, and flashy sound at every opportunity, and the vocals put this track right over the top with a truly inspired performance from an artist with equally stunning talent to support the slow-burning fire Walters has created.  “Survivor” is a brilliant example of what it sounds like when everything is going as right as it potentially could be – the music has a relentlessly enticing low-end pulse & pace designed to make your speakers salivate, and the stellar melody supplied via the microphone floats gracefully, boldly, and beautifully along the surface to enchant you.  From verse to chorus, “Survivor” is the kind of cut that you can’t take your ears off of – nor would you ever want to, nor does Larry ever give you a reason why you would – he’s got a single-worthy cut that supplies immaculate vocals & music from beginning to end.

And while I get that, in the sense of the masses listening, the audience potentially narrows the moment we’re talking about instrumental music in comparison to those out there rockin’ with vocals – that’s just the lay of the land, the order of things…it’s just how people listen to music en masse & there’s next to nothing that can ever be done about that unfortunately.  So while a tune like “No Food In The Library” might appeal to a few less people out there than the hybrid sound of “Survivor” does – if I were Larry, I’d simply accept that as the natural way listeners experience music & think nothing more of it at all.  Because when it comes right down to it, I’d go down to the mat screaming on behalf of “No Food In The Library” actually being a better tune than the previous single we were just talking about – this is a perfect example of what it sounds like when the music does all the talking you need without a single word involved.  Well…I suppose that’s not entirely true, there’s a sprinkle of a vocal-sample here & there throughout the inventive & jazzy, chilled-out structure that sparkles & shines on “No Food In The Library” – but they would be far from the most defining attributes of what drives this song all-around.  No less essential ultimately, but not the most epic moments – that kind of thing, you feel me?  Personally, I think Larry proves he’s got everything he needs with his style & sound so impressively focused and dialed-in so tightly on this second tune – the bass-lines are extraordinary, the texture & tone of both that & the guitars set the stage – the electro-beat & trumpet put it all right over the top and shift this song from good to great.  “No Food In The Library” continues to flex its creativity & welcoming vibes through the expressive electro elements floating through the atmosphere and the brilliant transition this cut makes around the 1:50 mark.  Highly interesting and enticing at all times – “No Food In The Library” is right on par with music you love in projects like Boards Of Canada, Four Tet, Prefuse 73, and The Album Leaf…maybe even a little instrumental Nine Inch Nails at their most chill when you factor in the deadly way this song starts too.  Bottom line is, “No Food In The Library” flexes sweet innovation, creatively melodic combinations, and exploratory sound you couldn’t possibly get bored of – everything about this single warmly invites you to listen to this imaginative instrumental cut.

What no music-reviewer is ever prepared for, and what no artist that makes this type of tune will EVER share with you in advance to warn you about, is that good ol’ song that’s, you know, just shy of an HOUR LONG.  Never really sure why that is, but I’ve got my theories.  Anyhow.  That’s what you’re in-store for with “Minimal Polytope Part 1 And 2” – it’s just over fifty-six minutes and thirty-seconds in total – and this is where Larry Walters will separate the audience even further with a very large ask of most listeners out there.  Don’t get me wrong – as an audiophile, I will sit here and listen to this song ALL DAY, EVERY DAY happily – because I love this kind of stuff…the texture he’s got climbing through your speakers from the lefts to the rights on “Minimal Polytope Part 1 And 2” is downright exquisite to listen to – but I certainly understand the challenge this would be for the average set of ears out there.  That’s not me barking down to you villagers from atop my guru-mountain, that’s just the facts – think of the average attention-span of the people right now – think of your own for that matter…and then ask yourself if you can really honestly hang with a musical experience of one tune that’ll stay fairly locked into its stoically hypnotic groove & melody for nearly a full hour?  Most people, if they’re being truthful, simply can’t sit still as long as “Minimal Polytope Part 1 And 2” would demand of them to listen to the brilliant way this song subtly shifts around as it transitions & plays on – and I get that…I don’t begrudge them for it, that’s just where the people are at right now…again, en masse.  But for those of you out there willing to take the plunge by pushing play – expect you’ll continue to love what you find if you dig the very first moments of “Minimal Polytope Part 1 And 2” – it IS after all, a song based on the model of what the title implies…it’s the kind of cut that really embraces its minimalist style and draws it out into one seriously epic & understated experience.  For those out there that don’t ‘get it’ – they’d likely hear a song that doesn’t change at all for nearly an hour of their time – but for those that do…those that are paying close attention to the finest of details, tweaks, and twists you’ll find so precisely placed within this audio-adventure, you’ll likely be quite shocked by just how much it changes despite the appearance of hardly a thing at all moving upon the surface of sound.  There are moments of melodic sweetness, moments of more malevolent or mysterious sound that creep in, like around the 11:30 mark…if you’re really listening, believe me, you WILL hear the attention to detail that’s been put into “Minimal Polytope Part 1 And 2” and be genuinely impressed by how well Larry roams through both the light & dark within this idea, shifting between them with a controlled hand & ear for sound that guides his intentions & ambitions into successful results.  I’d never expect in a million years that most people out there would stick with “Minimal Polytope Part 1 And 2” for an hour – and I sincerely doubt that Larry would expect any otherwise himself…that’s not the reason as to why a song like this ever gets made.  That doesn’t make it self-indulgent – it simply makes it a niche area of music that most people don’t often find themselves within, that’s it, that’s all – and as long as Walters is cool with that, I’m tellin’ ya firsthand there will always be someone out there like me that’s willing to buy the ticket & take the ride.  The subtle changes you’ll find, like the increased electro presence around the 18:10 mark, or the more haunting sounds entering the thirty-third minute that’ll shape & shift the direction once again over the minutes to follow, flexing and slightly changing the pulse of the music hanging suspended in the air – these things might not exactly make you stand up & cheer, but they are spectacular & stunning in their own right.  There’s no doubt that Larry’s created a mesmerizing experience that displays a mastery of the ambient style and how to flawlessly make pace, space, and sound work to his advantage on “Minimal Polytope Part 1 And 2” – he’ll get all kinds of inventive with his timing and structure as the song moves past its mid-section and continually give you audible incentives to stick with this gigantic track.  I get that it’d be asking a lot of the average ears out there – but I found this last track outright fascinating…I could get lost within the swirl of the atmosphere & spaced-out melody on “Minimal Polytope Part 1 And 2” for hours on end without snapping out of it & realizing how long I’d been listening for.  HAPPILY I might add…I don’t stumble across cuts like this every day…I kinda wish I did.

Larry’s got himself separate dimensions of sound on display for ya here in 2019 with these three singles.  Let’s be honest…two singles and one ALBUM of a song…but you get the point – he’s put himself out there in an impressive set of unique directions and come out with shining results in each style he’s tried.  Definitely a dude that’s got a gift for production and his own vision for how we experience music – Larry Walters pushes the boundaries to get the best from himself and create unique moments we haven’t had yet by allowing his imagination & skillset to guide him to victory…he’s about quality, invention, and attention to detail – and I really feel like he stands apart from the rest for his authenticity & efforts.

Find music from Larry Walters at his official page at Spotify here:  https://open.spotify.com/artist/34h4Bf126i0Ut7E0wotRZc