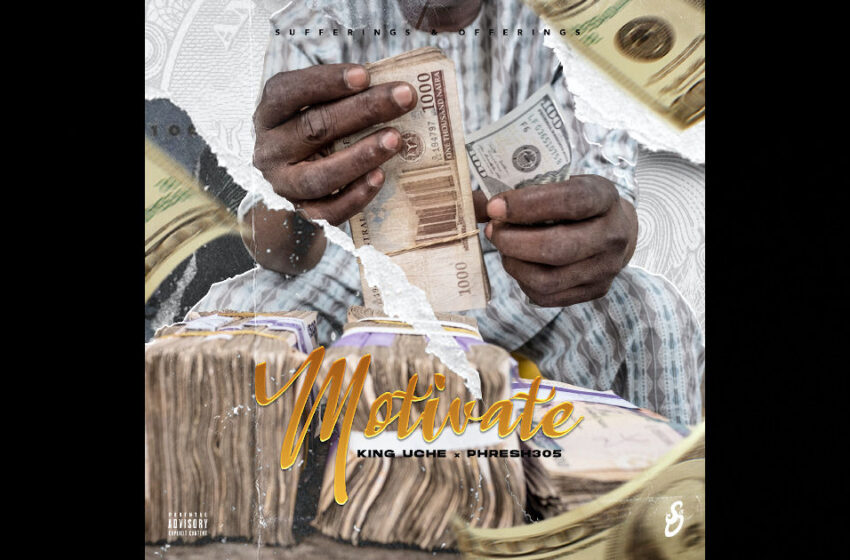 “That money accumulates” – stack up that paper y’all – you know that King Uche & Phresh305 are!

At the very least, they’ve put themselves in a solid position to add a few more layers to their own stack through a quality cut that’s definitely going to be bumpin’ loud & proud at the top of a whole bunch of playlists out there.  King Uche, Phresh305, and the art of the HOOK at WORK…that’s what you’ll find in this single “Motivate” – these two know exactly how to go about making a memorable impact on ya.  Given that this cut is essentially about being inspired enough to reach that next-level you deserve & all – I’m just saying…you might wanna pay some attention to the blueprint to success they’re laying out here.

From what I’ve read online, this is King Uche’s first single featuring a guest-star…and I can vouch for the fact that these two talents combined certainly pump out powerful results designed to shake your speakers loud & proud.  No joke – they should both be exceptionally proud of how strong this song came out from start to finish…for sound THIS BIG, the production is outstanding…you’d have to practically wrestle a cut with a low-end beat like this to stay under the red-line on the studio boards, and it’s pulled off perfectly here.  Not only is the clarity there in the production, but the performances you’ll find from both King Uche and Phresh305 are fully loaded with the level of confidence & stylistic swagger that confirms they’re bossed-UP, LARGE and in-charge on every beat and bar you’ll hear with your ears.

As he details right there in the song for ya through its lyrics, King Uche has spent plenty of time in the grind, hustling it up, workin’ hard, and doin’ what he can to build that stack of paper into an empire – and as many of you know, that’s never an easy task – you need a soundtrack like “Motivate” to remind ya that no amount of haters should ever be enough to stand between you & the pursuit of your dreams.  Take a page out of the King’s playbook here…and truly understand what it is that you’re listening to – yes he’s put in a ton of work, and no doubt that it’s been harder than hard to get to the point he’s at today – but that’s just the thing y’all…he made it…he’s come out stronger on the other side of it all, and everything he’s been through has made him into the artist that he is now.  Hopefully the man’s got it a bit easier in life now, chillin’ out in the studio makin’ beats & rhymes to keep you all entertained…I don’t know what the King was up to before all this music stuff, but I’d imagine he’s loving life the way it is now.  It sure sounds like it, and there’s no doubt about that – “Motivate” thumps & bumps with inspired vibes, memorable hooks, and more superior sonic bounce to the ounce than you’re likely prepared for!

It’s always awesome to hear an artist end up in the place where they were meant to be.  Like I said – I don’t know exactly what King or Phresh305 have had to go through to get to where they are now, but I do know that life ain’t easy…and that dudes with the skillsets these two have deserve to be rockin’ the mic where they belong.  I can fully guarantee you’ll have the hooks of “Motivate” roaming around your dome for the next weeks if not months to come…I might have only had this track for mere days myself, but believe me, I can already tell that the hooks to be found here are not only highly addictive, but they’ve got genuine staying-power…this cut’s gonna have no problem holding up over time whatsoever.  Credit where credit is due y’all…you put in the work, you get the results – I mean…it’s even better than that really – you earn the results when that’s the case, just like King Uche and Phresh305 have here on “Motivate.”  It’s all put together tightly from the lefts to the rights on this single – each emcee brings major swag of their own to the bars & the music is absolutely addictive; there’s definitely nothing here that I’d be wanna change or complain about & I fully suspect the rest of you Rap fans will feel the same.  King Uche and Phresh305 give you every reason to turn this track up as loud as your system will carry it.

Find out more about King Uche at the official pages below!