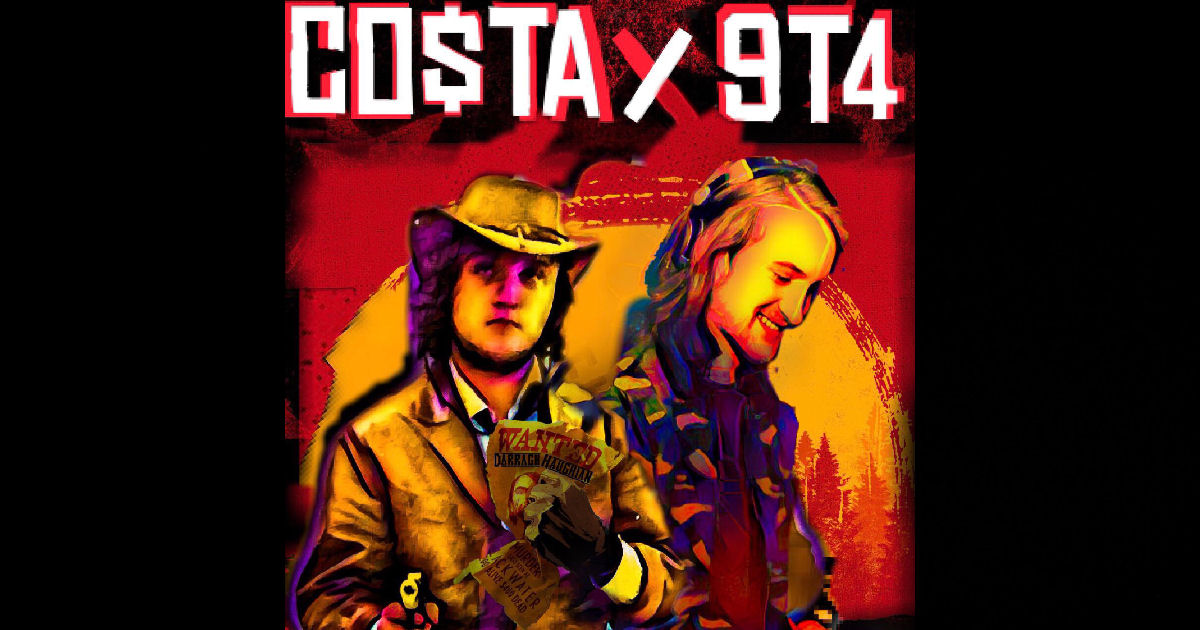 Alrighty…all the way from Ireland, we got a young rapper making his way across the globe here – King Co$ta in the mix today y’all.  Definitely some wild skills on display and certainly not short on personality – we’re checking out what the King brings to the m-i-c and to the Rap game in a sample set of four.

They come from a range of time as well – I reached back a year or so for the first cut I listened to, called “$uper$tar.”  Rhythm & flow-wise, King Co$ta keeps the words rippin’ at full-speed, mixing it up between direct imagery and thoughts off the top of his dome; most importantly, he’s hittin’ that beat on-point and keeping his words connected to the vibe.  The beat’s alright…no real complaints there, it’s mixed well and produced tightly by what seems to be a longstanding collaborator of King Co$ta’s in producer 9T4.  The question becomes whether or not “$uper$tar” does enough to stand-out and live up to the claims being made in the lyrics…that part’s honestly harder to answer and only time will tell – he’s got plenty of time to make his $uper$tardom come true.  First Ireland, then the world homie.  Solid start though…”$uper$tar” is a good introduction to King Co$ta’s style & sound where you can hear the genuine swagger he brings to the mic, but you can also hear there’s still more that exists in the tank & in his potential.  There’s tons of authentic confidence in the way he spits…that connects for sure, and it’s a damn good place to start building from when it comes to anything to do with Rap.

“Omega” picked up the vibe…I felt like I could get behind this one for sure.  It’s on that boastful side of Rap…but hey, I mean, he is called KING Co$ta for a reason right?  His name is a statement in itself – may as well back that up in words, which he’ll do by declaring himself the “Omega” in this second single.  9T4 does a solid job from wall-to-wall with a killer beat that sets the Hip-Hop vibe perfectly with vibrant sounds that bounce right out of the speakers with a dreamier melody attached to the surface overtop.  All-in-all, as I checked out this set of tracks, I kept coming back to this as one of the stronger cuts for sure – there’s excellent balance between the strengths of this track from the music to the microphone.  9T4’s got this spring-loaded with plenty of dynamics that are perfect to pivot, shift, and bounce off of – the “Omega” himself, aka King Co$ta makes the most of these bars and brings rhythmic bars that hit the mark with resounding confidence.  Definitely enticing sound at work here…full props to this collaborative effort between 9T4 abd KC – they kick it old-school with respect to the roots of Hip-Hop on “Omega” while still creating a track that people would certainly wanna bump on their stereos today.

The man takes a decisive turn into Trap on “Doors” and lets a bit of the wilder & more primal side of his style come out.  Are you gonna catch every single word?  Not likely no – but close in all honesty…it’ll get muddy for people in the chorus, but that’s the rhythmic nature of Trap essentially, that’s true to the style.  On the verses, believe me, the man is plenty clear in what he wants to say and how he wants to say it.  Get the man an oxygen tank will ya?  He hardly takes a bar off once he gets flowin’ and impressively rolls through his verses with that signature confidence & bold tone of voice.  What I dig most about “Doors” is the tension and drama in the air here…I felt like this cut gets right in your face with the beat & vibe of the music – and right from the drop, King Co$ta puts precision punch into his words, punctuating the syllables all in the sweet-spot to fit the metering on-point perfectly.  Certainly not short on personality here…and in all honesty, regardless of what you or I or anyone thinks of Trap as a genre, there’s a skill and craft to the art like anything else – and KC flexes that muscle strongly here.  It’s undeniably entertaining when it comes right down to it…even though the ingredients are actually fairly minimalistic in design, King Co$ta takes this beat for a serious ride and gets right into the moment.

Make no mistake, the man commits to his material and you can certainly hear it in the way he spits.  “Liar” makes use of a big bass beat kickin’ and them hi-hats making their making while mysterious & curious sounds roam around in the atmosphere.  This cut dates back a year or so as well…the man’s closing in on 30K’s worth of hits on it at Soundcloud…pretty safe to say there are a ton of people out there feeling the eerie & menacing vibe of this single.  Dude’s mad at hoes, what can ya say?  He’s been mad at hoes throughout most of these tunes at some point or another…so there’s that.  My advice on that isn’t me getting bent out of shape when it comes to misogyny in Rap music – that’s a prevalent aspect whereby you almost wouldn’t be able to listen to half the fuckin’ genre if it offended you, and fuck that noise – it’s much more to do with diversity in content.  King Co$ta does have a recognizable style and flow – but what can happen in treading over material that’s been covered endlessly by countless others threatens how far a cut can go, no matter how addictive the flow or sound might be.  Eventually the people get to the lyrics as well homies – there’s no doubt he can write bars and he certainly commits to the concepts, subjects & themes he’s rappin’ about…but to really stand-out, I say go full-on unique & create some rhymes that don’t dwell too hard on what’s been overdone already long before him…it’ll push him over the edge and much further towards the tops of the playlists out there.  And yes, I’m just as hard on Rock tunes that retread all over the chicks & cars themes for the millionth time as well – it ain’t just Rap that has its pitfalls in that respect – the key to establishing yourself as a real artist is to find your way out of those familiar patterns and trails already blazed to carve out your own.  Right now as it stands, it’s not the explicit content that’s gettin’ in this man’s way…it’s that diversity in the lyricism…ain’t no doubt that with the man’s skills he’s got the solution for that and as a young rapper, hell, you want room to evolve.  Having said all that, I think the hooks of “Liar” come out pretty strong & the flow is as on-point as ever; musically, “Liar” is one of my favorites from the set without question – that’s a hella unique beat.

DEADLY sound on the man’s latest – the music of “Already Know” is all-killer no-filler with a wild beat once again produced by the cunning hand of 9T4 in the mix.  Seriously fresh, “Already Know” is only days old on his Soundcloud page – and just like you’d hope for, that time in between his old & new has revitalized his energy and brought out his best all over again.  Undeniable to me – “Already Know” is perfectly executed…really smart use of background vocals supporting the main punch of the lyrics as KC pimp-strolls & flows through this new jam like he’s ready to take the title of Rap champion.  This is that anthem you’re looking for…the kind of cut that’s gonna get the crowd jumpin’ and straight-up wild’n’out – “Already Know” has that edge and energy that’ll set the party off and have people throwin’ chairs & shit…it gets you amped UP – and that’s all by design.  You just can’t beat that epic low-end rhythm that rolls through this cut to create the vibe – it’s monstrously powerful; and surprise, surprise, wouldn’t you know it, when you get the best on wax from the production department and in the music, you get that next-level of inspired performance from the main man on the mic as well.  You can hear this vibe surging through him – King Co$ta makes this moment count and this new single as single-worthy as it is with a slick combination of verbal confidence and unmatchable sound.  Hooks are seriously strong, but so are the main bars as well…you get more out of the lyricism as well, no doubt; similar themes perhaps, but with more happening in the cohesion of the storyline he’s weaving throughout the rhymes of “Already Know” – it literally feels like you get more from King Co$ta on his latest single as he doles out a bit more of what’s on his mind for us all to hear.  Always good to find an artist’s current work being their best – and if “Already Know” is any indication, it sounds like the King is back with a vengeance in 2018.

Find out more about King Co$ta at the official pages below!