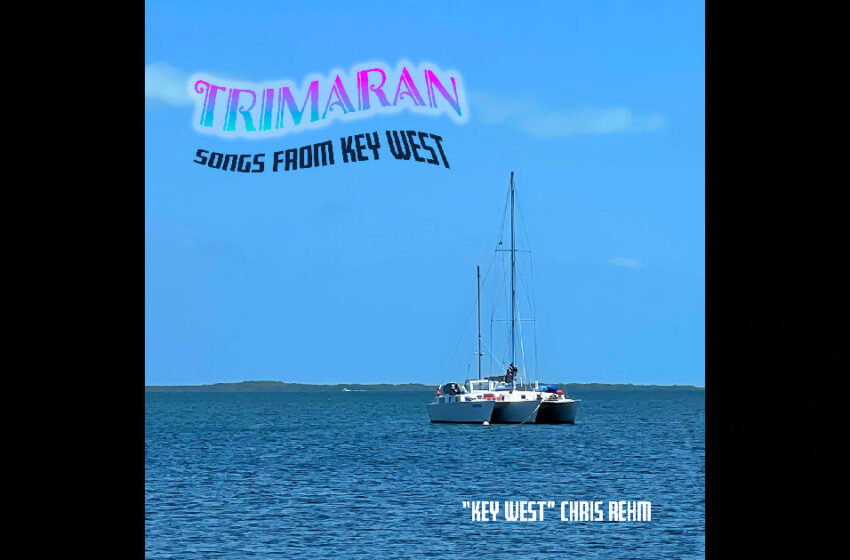 Can’t argue with logic like that I suppose…it’s been a pleasure folks, Key West Chris has summed it up for ya…I’ll just put my feet up here & relax, knowing that everything you needed to know, you do now.

While there’s a large part of me that suspects good ol’ Key West Chris might very well be one of those legendary folks out there that loves to remind everyone he’s got a boat…I’m gonna fight back my isolation-induced jealousies for now.  Y’all remember this dude right?  We first checked out his music last year here at our pages with his record All The Best From Key West and got right into this dude’s sunny-side up attitude, style & sound.  He’s managed to dock himself long enough to get some new music recorded for us all…wait…unless…omg, does he have a full recording studio on his boat too?  I wouldn’t rule it out or put it past this guy…Key West Chris seems to know what he wants outta this life, you really never know…he might very well have added on a secondary yacht to travel alongside with him around the globe that serves entirely as a separated studio for whenever the mood strikes him to jam.

Dude’s rockin’ out with three hulls, and here I am just another no-hulled bum.  I need a career change…

On the bright-side, we all get to travel somewhere in our minds at the very least through the music this dude makes; and chances are, with most of us stuck indoors for the past who-even-knows-how-long anymore, there’s gonna be a whole bunch of you out there that’ll appreciate tunes that can whisk you away to somewhere else other than where ya are.  Key West Chris has always proven to be capable of that from what I’ve personally experienced with his music so far to-date, and does so once again with this tight set of three tunes on his new Trimaran EP.  Despite the short framing of the record that I quoted for ya at the beginning…in behind the scenes, I’ve got like…MASSIVE stories that accompany these tunes that get to the full meaning of what they’re about.  I had to kind of fight this push/pull over whether or not to read’em too closely…ultimately, they’re extremely beneficial to knowing the full story behind what KWC is singin’ about…but they’re the kind of superbly detailed notes that would also take away any potential interpretation anyone could have just by listening, which is where I tend to keep my focus.  If I’m being 100% honest with the dude though, I’d ditch the “protagonist” stuff in the notes, give these fine fictional folks their names at all times, and completely write a companion story to go along with his music – Key West Chris is more than capable, and it makes for a great way to create a whole new avenue into what he does with crossover potential.  He’s clearly a gifted storyteller, and he proves that throughout these three tunes much like he has in the past, drifting through smartly composed tales that I’d assume inspire the music & vice-versa when it comes time to record.  You instantly feel the warmth of “Cayo Hueso Rain” as it starts…and I love that the sound really echoes the spirit of the song’s sentiment – it’s an audible cue that tells us, rain or sunshine, KWC & his characters within this first tune are in a beautiful place.  He writes in a very Newman-esque, highly observatory way that’s like seeing something & singing about it immediately as he scans a room or what’s in front of him, but at the same time, it’s these vivid details that all stack up and create the imagery we need as listeners to escape wherever we are and slip into the world of KWC for a moment or two.  Approximately eighteen & a half minutes if you need to schedule it into your day to have a good listen…not the song, but the whole EP.  Bass-lines are thick, rich, and warm…the percussion is gentle & inviting…Chris gives a great performance on the microphone & the backing vocals here are equally exceptional…”Cayo Hueso Rain” is a solid start.

I think for myself, “Sunset Sail” was probably my own favorite of the three, but likely just by a hair or two.  Depending on the mood I’m in, I’m sure I could make an honest argument on behalf of any of these tunes if I’m being real with ya…Key West Chris knows what he’s doin’ and always has something well worth your time in listening to.  “Sunset Sail” is really one of those magnificent moments where his sensory style of sound makes its most vibrant connection to the sincerity of his melody & charm.  In what’s more or less a duet, he’ll trade the microphone back & forth in a gentle & sweet performance that remains every bit as chilled out & mellow as you’d expect a beautiful “Sunset Sail” would be.  “Cheers to livin’ by the sea,” am I right?  “There’s nowhere else I’d rather be” – you and me both buddy; my wife chose snow for some ungodly reason, so here I am rockin’ out of the nation’s capital of Canada & really trying (not so hard) to hide my jealousy of all this sunshine & the good times KWC gets to enjoy.  What makes “Sunset Sail” as excellent and on-target as it truly is however, is the completely organic vibe & atmosphere he’s got working in his favor here.  Yes, there’s more than just a mere guitar at work here when you get into the ingredients that make up the music from the percussion to the piano keys, but that’s the mood it really has…it’s like KWC just pulled out a guitar, walked up to the front of the bow of his incredible boat, sat down beside the one he loves, and started to play as the sun goes down to reveal the neon vibrant horizon.  Hard to argue against this pretty much being the very definition of quaint and pleasant…you float away on some pretty dreamy folk-style sound without resistance or hesitation here on “Sunset Sail,” and just glide along with the endearing vocals and delicate, organic sound to be found.  It’s as metaphorical as it is present & in the moment…Key West Chris & his crew steer into a quality tune and stunningly sweet love song that perfectly captures the melody between vocalists & lyrical imagery.

“King Tide” finishes the set on looser vibes, almost in celebration of reaching the final destination wherever those three hulls have been heading all along over the course of the Trimaran EP, and KWC with his cohorts start kickin’ out the jams with all kinds of additional flash & flair.  Much reminiscent of the late 80s vibes that connected Pop hooks with Progressive tendencies, and of course, in the right setting, a whole lotta Funk thrown into the mix as well, which this song certainly has too – “King Tide” embraces its lively energy and has a whole lotta fun in doing it.  Fun, which translates directly to us as listeners…the kind of combination of rhythm, groove, and attitude in both the vocals & music that makes the whole difference…the kind of cut that you play, and the effect washes like a wave across the room, inducing immediate good times to be had by all.  “You’re out on the water, this could be your last ride” – you’ll find much of this track contains symbolism that encourages you to get out there & live yourself some LIFE before the reaper-man comes to knock on your door…heck, Key West Chris is emblematic of living life to the fullest if you wanna get right into it.  It’s in the words he writes, it’s certainly there in the passion he plays with and the players he’s got jammin’ it up with him…tracks like “King Tide” give you a fantastic dose of the spirited vibes and musicianship he’s working with and the addictive effect his charismatic magic has on us as listeners.  We’re talkin’ about the art of the riff, the solo chops, the moves and grooves that get everyone paying attention, invested, and fully engaged – “King Tide” is a Blues/Rock style party-tune that’s stocked & loaded with real personality & character.

All-in-all, the Trimaran EP has a lil’ somethin’ for everyone.  You’ve got a cut the songwriters out there are sure to love in “Cayo Hueso Rain,” you’ve got a cut for the sentimental folks out there that love slow & endearing melodies like you’ll find on “Sunset Sail,” and you’ve got the finale fireworks that come through the fun to be had with “King Tide” at the very end.  I mean, if you’re gonna go the three-song EP route, this ain’t a bad way to approach it at all, you dig?  It keeps Key West Chris on people’s playlists & radars by staying current with something new, it provides us with a stellar range of styles, sounds, and experiences to be had in a short space, and largely satisfies for its diversity, passion, and organic vibes.  Key West Chris is a man that feel the music he plays, and you’ll find that always comes shining through the music he makes, in any gear he happens to be playing in, fast or slow or in between.  The Trimaran EP speaks strongly on behalf of the quality songwriting and musicianship he brings to the music scene.

Find out more about Key West Chris from his official website at:  https://keywestchris.com