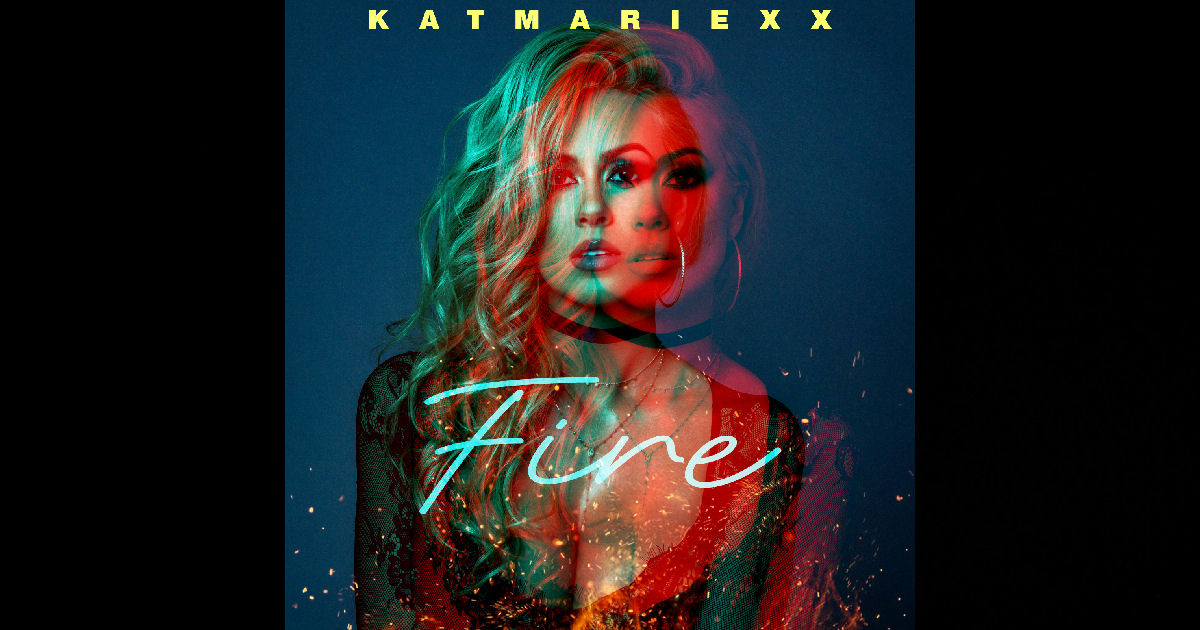 I’m all about it KatMariexx – you and I certainly dig a whole lot of the same music out there.

Reading about her influences & inspirations from her main site, bands like The Cure, Depeche Mode, The Cardigans, and Garbage, in addition to artists like Madonna and Lana Del Ray – I felt like I got a great sense of what I’d potentially be in-store for in listening to KatMariexx’s debut single “Fire” upon pushing play.  If you add up what you see in that list among the others you’ll find on her homepage, you can infer KatMariexx will have a moody mix of flashy style & sound that’ll dig deeper than it’ll appear on its shiny surface in that same impressive, catchy, and twisted fashion that those who have paved the way for her have molded.  Executing confidently on a combination of her influences, KatMariexx is clearly ready to carve out her place in music – and at the same time, she’s going to satisfy the cravings of so many listeners out there by owning these influences and furthering their potential through her own story now.

If I had to choose which three of her inspirations I hear the most on “Fire,” I’d go with a combination of The Cardigans for the sound of KatMariexx’s vocals, a song structure like Garbage had in their prime, and a beautiful moodiness like you’d find currently in Lana Del Ray’s music…thriving somewhere in the midst of all that, you’ll find this impressive new artist ready to compete with the best out there already.  KatMariexx is inarguably on “Fire” with an expressive & provocative tune that generates a ton of catchy sound and empowering sentiment that celebrates sexuality.  Openly revealing the power of taking control through her commanding performance on the microphone & in her lyrics, KatMariexx is fully confident & completely unafraid to embrace the moment and take it in for all its worth.  The results become an equally sensual & sensational experience that conjures up feelings & emotions of all kinds, and a whole ton that listeners out there can relate to for sure.  And what those same listeners crave, is that same very music that KatMariexx and I, and no doubt yourself, all truly love…we love it not just for the remarkable texture & sound it comes along with, but the fact that artists like this one have the courage to step up and say things exactly how they want to say them, no holds barred.  KatMariexx still leaves a lot to your own imagination with the way she weaves her words throughout this single, implying more than directly beating you over the head with any one specific meaning – she’s played with “Fire” smartly, by leading you to your own conclusions as to ultimately how far this tale might go.

So props to that…I think she gets the point & message across completely here, and delivers on the ambition of creating a sexually-charged, empowering female-anthem that’s stocked full of catchy sound.  Collaborating with music-producer Joe Crotty to bring this debut tune to fruition – they’ve incorporated a massive amount of vibrant & colorful sound from beginning to end, but also techniques, talent, and ideas that stand out for all the right reasons.  KatMariexx steps so confidently into the spotlight that she’s sure to impress the masses out there & find her way to the tops of charts & playlists worldwide.  With the sparkling & sleek design of the music produced with such a lively & fresh sound by Crotty, “Fire” is the kind of cut strong enough to live multiple lives – as in, it’s already stunning in its original form, but don’t be surprised to hear this coming out remixed into the sets of DJs around the globe.  And for plenty of good reasons…the club-circuit would love the subtle & sensual slow-burning aura & vibe this song contains.  As far as those ideas I was referring to go – KatMariexx even went the extra mile and got straight into the bathroom to record the vocals of “Fire,” all in a sincere effort to get the exact sound & reverb she knew she was looking for in the sound she wanted for her performance on this single.  The results definitely end up speaking for themselves…everything about the way she’s performed this song to the way it comes out in the mix all-around ends up proving that the methods applied were ones that truly worked.  It all succeeded in getting the best out of this artist for her debut, and provides your ears with a memorable sound & set of hooks you’ll certainly remember – KatMariexx has a strong single with “Fire” – I love what I’m hearing in this artist’s first cut and absolutely looking forward to hearing more.

Find out more about KatMariexx at her official homepage at:  https://katmariexx.com