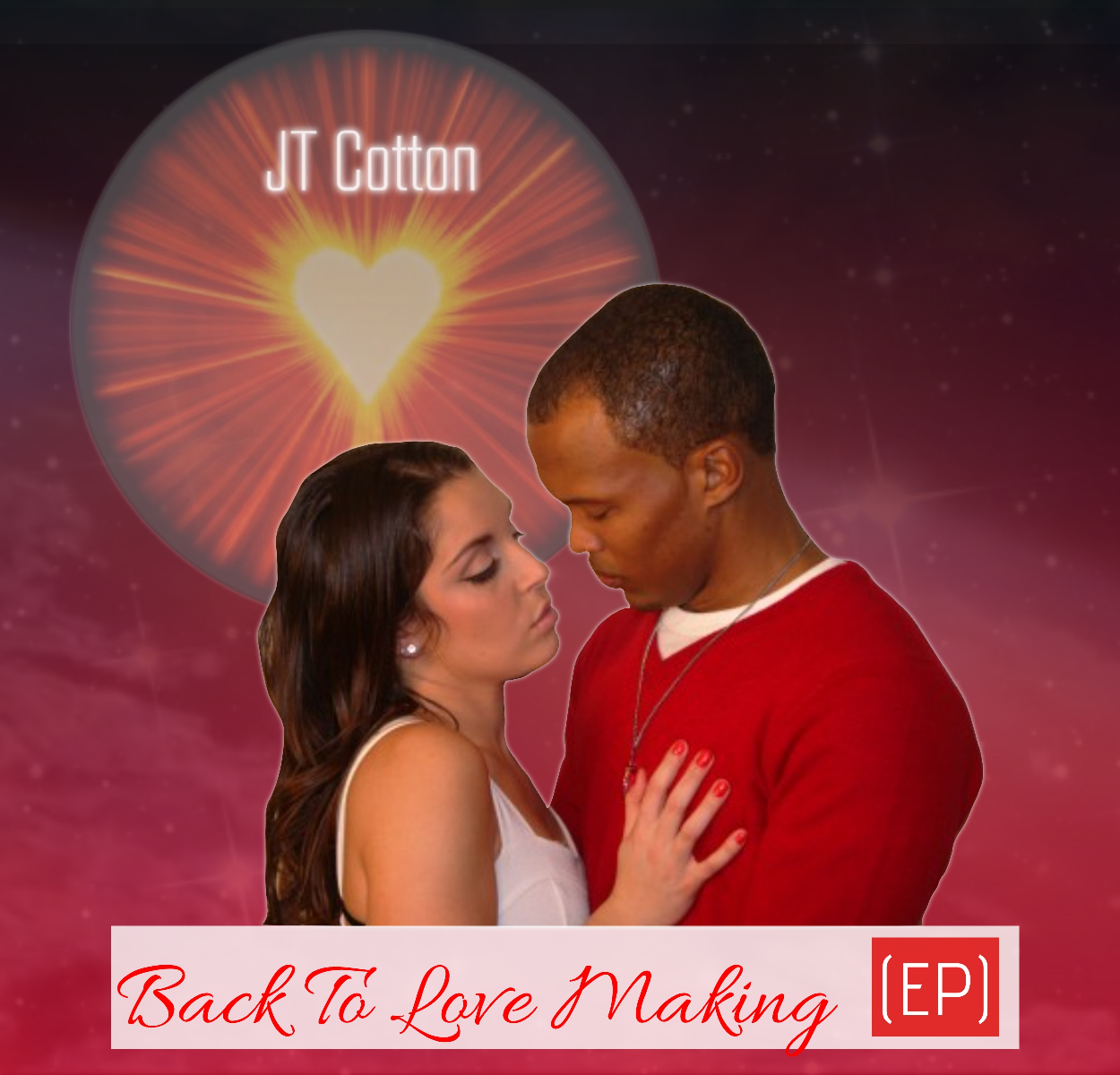 JT Cotton – part R&B/Soul solo-artist, part professional-moisturizer for the ladies out there.  With an EP full of tunes looking to get panties droppin’ worldwide, he’s written a series of love-songs that showcase a solid grip on writing and flow.  As he weaves his vocals and lyrics throughout the sensual-anthems, we take a closer look at what’s happening on the Back To Love Making EP and whether or not you should be ready to drop your phone-numbers onstage the next time JT Cotton hits-up your town!

Beginning with a song called “Never Met A Woman Like You” you immediately get a sense of the old-school R&B masters…you know…the kind of guys out there that grabbed the mic with their sexualized-seriousness for a real heart-to-heart talk just between the ladies and himself for a moment.  I’m sure you can picture or hear something similar in your head to the reference right now…something like ‘girl…you know I’ve been waiting for this moment for so very, very long…’ or something along those lines.  Cotton starts out “Never Met A Woman Like You” with that familiar and classic-style of opening and speaking directly to his intended audience before launching into the singing portion of the song.  I’ll say this…JT starts this out on a little bit of shaky ground for me personally; on the one hand, I think he’s written himself a tight song in the genre and one that really shows respect for those that paved the way for him to be here today.  On the other hand, he hits this one up just a bit too high-up in his own vocal-register for a portion of the verse on “Never Met A Woman Like You” – you can hear what he’s going for; it’s slightly wide of the mark, but really, not so much that it would turn you off.  The songwriting and hooks of this first cut manage to offset any minor flaws in the vocals to still make a verifiable impact.  Dig the punch to the low-end of the song, dig the music and for the most part I dig on Cotton’s performance too…above all, I get where he’s trying to go with it.  We’ve all out-written ourselves from time to time…and I think the opening of “Never Met A Woman Like You” gets the better of him in pursuit of those notes a little…but I think he also builds up the flow and confidence over the course of the length of the song too.  It gets stronger as it plays…the hook in the chorus is always delivered spot-on and definitely has enough pull to bring in the listeners.

“Holiday For The Hearts” begins in a similar fashion…and you get the sense from this second-tune that JT Cotton might just be waiting outside your window to have one of these heart-to-heart conversations at the beginning of each song.  I like that you can hear that Cotton is committed to the ideas, and once again the overall idea in this song comes out strongly…but again felt also like there’s something more that JT still has to give.  I think the vocals certainly have their bright-spots and highlight moments along the way…but still a touch or two uneven.  He’s in the right vicinity of what he’s looking for each song we’ve heard so far…so you know he’s on the right path to where he wants to take this material.  “Holiday For The Hearts” is a bit tougher to examine that the opening track was…there really isn’t a ton of hooks in this song to latch onto aside from the charisma and charm of Cotton himself…writing-wise, this second tune is not exactly flat, but not exactly full of dynamic life either.  A bit of a tough call as to whether or not this would be a song that would resonate with other people out there…the chorus itself doesn’t move too far away from the feeling of the chorus – “Holiday For The Hearts” tends to play like one big long verse, as opposed to a verse & chorus because of those similar qualities.  I would think even Cotton is looking for the night to progress when he’s out there working this magic…and I think without that real separation and added dynamics added in to make each part stand out how it should…that the man is risking spending the night on the couch and never leaving first-base.  “Holiday For The Hearts” comes out fairly smooth overall…maybe too smooth…maybe Cotton needed to rough this one up just a little bit more to keep us captivated a bit more than we are.  Lyrically, he’s got a great grip on how to write a love-song…that’s definitely a positive in both of these first two-tracks on the EP and there’s definitely no doubt about his talent in that respect.

You’ll never guess who’s there to greet you at the beginning of “Moment Of Appreciation.”  Wait…what’s that?  You guessed JT Cotton?  Hmm.  Okay…maybe this game wasn’t as tough as I thought…  You win the prize though, if that’s what you guessed…because YEP, there he is with the low-down conversation and ready to be there for you after your hard day’s work.  In a way…I get that it brings a consistency to the songs on this EP…but on the other hand, whether you’re Barry White, R. Kelly or Teddy Pendergrass, the best approach has always been to mix it up a little bit as opposed to keep us in a place where we feel like we know what to expect.  I think Cotton’s vocals match “Moment Of Appreciation” better than the other two tracks I’ve heard at the start…and I think that tone-wise, he’s on the way up in a smooth progression from where the EP began.  I think the chorus is a thread-better than and pops out just that much more than say, the one we’d just heard on “Holiday For The Hearts.”  I’m still not sure it’s enough of a switch to really make that impact…it still feels and sounds very similar to the flow in the verse as well…and though many of these songs are like snapchat sessions of your wildest nights out there…it’s still missing a little in the dynamics of the song as it flows from part to part.  I do really dig the hypnotic rhythm and melody of “Moment Of Appreciation” overall though…I found the more I listened to this third cut, the more I got right into this one and was able to just chill for a moment & really listen.  Cotton does a great job of bringing a real sound to the microphone…one that puts sincerity and emotion in his vocals and lyrics…and I like that too.

Even though JT is right there and waiting for you to deliver a narrative & spoken-word beginning to a fourth-track in a row…”Prophetic Love” comes out sounding more real to him than the others have so far.  A track dedicated to Mrs. Cotton…not sure whether that’s past, present or future…but it sounds as if from the lyrics, he’s still searching…or at least perhaps retelling the origin-story of his current relationship.  I think, and have thought throughout this EP, that the tones JT uses from the lower-register of his voice come out stronger, more confident than those sung in falsetto.  It’s not always even a battle of tone…quite often, Cotton hits the mark with his notes & tones…but it’s that added edge of confidence that tells us HE knows he’s making the right moves by choosing that style and approach that’s often subdued.  Personally, I think he’s just gotta believe in his abilities a bit more…that’s what I hear in Cotton’s vocals so far…he’s more than capable, he’s just gotta own it.  “Prophetic Love” runs into similar terrain as the others have in the sense that the movement of the song overall is slow, subtle and relatively unchanging…there’s enough happening to keep us listening, but again little to really make that huge impact in transition from the verse to the chorus.

Cotton goes 5-for-5 on this EP on the scoreboard of being there to greet you at the beginning of each track with a short narrative…making you ask yourself the question – ‘why is this man single-handedly trying to put Morgan Freeman out of work, isn’t this his job?’ as the final track “A Heart Of You” begins.  I’ll say this…the last track here probably has most of the highlights on this EP for me personally in this single-song.  I think Cotton sings this one with that confidence I was looking for on this last track – I mean, LISTEN to him here…so much more power, tone and strength in his vocals…but also, as I’ve pointed out, in the lower-parts of his register.  It all sounds thicker and fuller…the hooks are much more defined and the music is truly inventive around him.  I think he’s perhaps a little less focused around the fourth minute of the song…I think right around there you can hear the passion/interest wander a bit from the strength of which it starts – but I think that he regains ground by the end of “A Heart Of You.”  No doubt about it in my mind though…I felt like Cotton saved his best for last on this EP and came out with a real stunning idea in the writing and execution of this final cut.  It makes that impact you’re looking for as a new artist…and “A Heart Of You” is the kind of track that would keep me coming back to listen to JT Cotton…he’s given this EP a solid ending and many highlight moments here at the end.

They say it’s not how you start the race, but how you finish it.  Cotton has done well enough to keep me entertained here through a solid mix of classic R&B ideas and a genuine, earnest & honest approach.  The man definitely has talent, he can definitely write a song…but even with the best of the EP’s highlights – I’d be willing to bet that each step forward puts JT on more solid ground as his career and music progress.  The best is still yet to come for sure, but this is a good start!

Find out more at his official homepage at:  http://www.iamjtcotton.com/