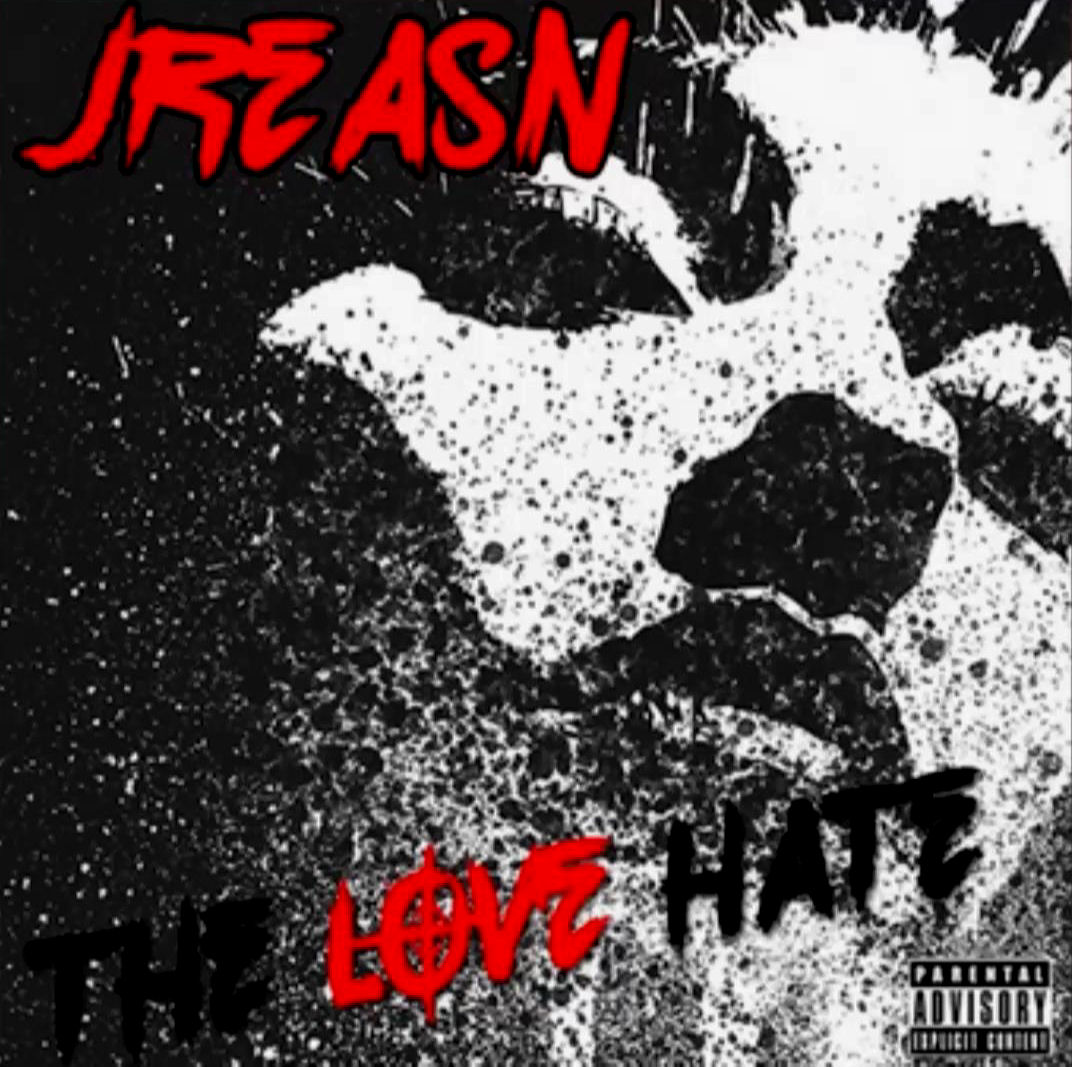 Been a decent week at the page for Hip-Hop/Rap music…we’ve had a bit more of that showing up as of late, getting us all ready for a summer full of big-beats.  No lie though…the music outside of those genres…has been…like…a lot-less than normal over the past several days; yesterday alone had me begging for the page to find its way back on track somehow, someway.  Rather than put JReasn into that whole mess – I felt it was best to save this solid new record of his until a brand-new day came along and we’re right into the heart of the weekend.  He’s clearly his own man – so I’m giving him his own day here at the sleepingbagstudios homepage…hell, I might just declare this to be JReasn-day altogether…right now he’s truly saving my entire brain just by making music that makes sense to me…cause it’s been awhile since I felt like it has…

The Love Hate Album had me instantly hooked.  Starting out with the subtle-beat that builds and continues to pull you in through what is definitely a radio-friendly, MASSIVE jam called “That Way” – right away I felt like this record was going to connect to myself personally, and to you, all the people out there looking for great music to amp-up your summers.  “That Way” will completely be a track that is gonna be found at the top of your playlists…everything from the incredible samples that create the beat to the way this entire track moves keeps it all 100.  JReasn gives you a reason, right away, to be on his side here in this single and be looking forward to whatever might come next.  He’s got himself a solid jam on “That Way” – I can’t imagine people being able to resist this first cut…and rap-wise, he’s flowing in all the right directions, truly getting right into the music and moving with it in perfect time & energy.

Now…I did briefly consider the fact that maybe I was hearing the best up-front…but there’s much more to this record than just one summer-sized single at the beginning – JReasn really kicks it into gear on the second-cut.  Somewhere in the middle of Jay-Z, Shwayze and maybe even a lil’ bit of Will Smith at his best, “Girl To Love” is a monster-success.  He’ll even reference Hova in this track’s lyrics – so picking out that influence isn’t a tough one…I’ll admit that…but the evidence is there to support it in his ability to captivate as an emcee and really command this cut with huge confidence.  The beat is incredible – and in that respect, you’ll get the other two comparisons I’ve made to Smith and Shwayze; it’s bright, clear and clever all the way through…and has ALL the makings of a serious hit.  This second track moves beyond impressive into straight-up professional territory…and if I was a label out there, it’s a song like this that would have me putting JReasn on speed-dial and trying to hustle a deal to get this guy a contract asap.  I can’t remember a Hip-Hop track being this easy to get into…I’d put “Girl To Love” right up there with the best of the best I’ve heard this year for certain.  From lyrics to performance, flow to beat – JReasn gives you every possible reason to love what he’s doing right here in this second song on The Love Hate Album and if you’re not on his side and cheering for him by the time this begins, I’d be extremely surprised.  This is the kind of Hip-Hop cut so damn strong, it’s bound to pull people in from whatever genres and styles they’d normally listen to and make them certified fans with a gigantic amount of crossover appeal that’s going to resonate with any set of ears listening – it’s genius.

“Girl To Love” comes out so bright, tight & right that you’ll feel the slight drop in the production of “Woosah” as it begins right after.  Not a bad song in its own right – but almost impossible to not notice that the sound overall comes out a little bit dirtier than the clarity you just got throughout the first two tracks.  “Woosah” does give you more confirmation of JReasn’s abilities on the mic and his talent for writing rhymes…lyrically this guy remains on-point throughout the entire record.  Musically, this track has a big low-end sound that tends to dominate the overall mix…I wouldn’t go as far as to say that he’s dropped the ball here on this third track, but I’d definitely be lying to you all if I didn’t point out that it’s missing a little bit of that magic you can hear in those first two songs through the production.  Solid hooks though…still good ideas, still great flow and lyrics…still the same solid-confidence from JReasn who never lets the masterful grip on the mic slip for a second on “Woosah” – but the standards for overall excellence were quickly set in those first two tracks and this third cut is a little thinner by comparison.  A true case of how tough it can be to follow up your best & brightest – “Woosah” slightly suffers from placement on The Love Hate Album…but not enough nearly to make you want to pass it by or skip to the next song.  It still fits the record, still reps JReasn’s style…just missing a little bit of the incredible magic in the mix that the first tracks had, that’s all.

Musically…I dig on the melancholy, thought-provoking vibe you’ll find on “Milk & Honey” and I think you’ll find some of the best lyricism from JReasn on this cut.  Again it might not be quite as bright and clear through the mix as what we’d first experienced, but due to “Woosah” bringing that down a notch or two just beforehand, it becomes a lot easier to accept at this stage in the record.  Just shortly after the two-minute mark, JReasn absolutely lights-up the mic on the next verse.  He might mention changing-gears in this track…and even though it references that he never changes them through the lyrics – it’s impossible to deny the fact that flow-wise, he definitely does for a moment here as he rips out the words fast & furiously before heading back to the slow-grind of this beat.  Really solid work on finding the music & samples that fuel the beats for the rhymes of this record…JReasn has found some excellent material to work with and he makes the most out of each atmosphere with intensely matched energy and lyrics that bring the most out of himself and each song’s unique texture and tones.

Take the record’s title-track for example – “The Love Hate” is one hell of a unique track.  It finds a way to make use of bright-piano samples overtop of a seriously menacing low-end muscle that flexes throughout this beat…and once again, the star remains the star.  JReasn rhymes with massive confidence that’s well earned – you can audibly hear that he believes in the material he’s making…and as far as my ears are concerned, he should be.  This track is full of flavor…really well edited and produced in the beat, and the rhymes fit the energy, atmosphere and metering perfectly.  In a sense I can hear that the way it moves might take a little bit longer for people to latch onto and connect with by comparison to how easy it is to get into the tracks at the beginning of the record…but also by the same token, it’s taking on beats that are unique like this that allow JReasn to really flex his skills and show you how diverse, versatile and creative he can be when it comes to his music and career.

If there’s any doubters out there…if you’re wondering if he’s played it too chill at any point on the mic throughout the record (which y’all shouldn’t be) – “Keep Going (To Be Continued)” is going to quickly silence you right the hell up.  In a turn on the mic that the infamous Gift Of Gab would be proud of – this short, less-than ninety-second final cut makes all the impact of a full record with a blazing verse from JReasn that never stops moving.  A jazzy beat and a rhyme that absolutely hits home both through the lyrics and delivery – this final burst of energy from JReasn gives you every possible reason to want to return to this record and spin The Love Hate Album all over again.

Find out more about this talented emcee at the official JReasn page at:  http://www.jreasn.com/