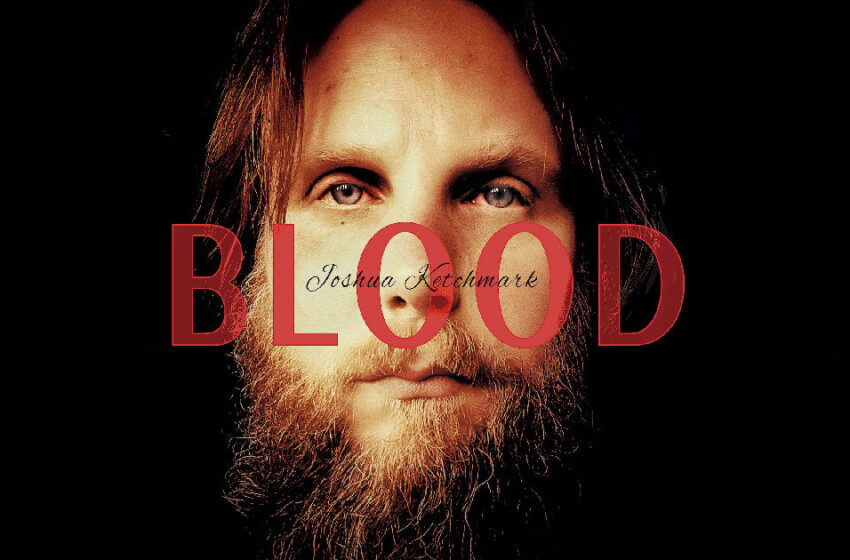 I feel like this dude right here is on completely solid ground.

“Joshua Ketchmark has made a damn good soundtrack to his life, and you should care.  Why?  Because it very well could be the soundtrack to yours.  He delivers it all with melodies and riffs that leave shout-out-loud anthems ringing in your head.”  #Truth  #AlrightFineDammitICareThenAlreadyJustCalmDownThereHoss

From what I gather, seems like good ol’ Joshua here is working on nearly fifteen years as a dedicated solo artist on a professional level…and for what it’s worth, it sure sounds like it!  In the good way…you know what I mean – I’m sayin’ he sounds completely dialed-in to the kind of music he wants to make, and still plenty inspired to be gettin’ his tunes out there into the world.  In fact…as far as I’ve read, it seems like the only thing he’s really struggling with is keeping up to himself!  His upcoming tenth record called Blood, featuring this very single here called “Covered In Blood,” features a whole bunch of songs that he wrote back in 2018/2019…and my gut instinct tells me that this is probably the kind of dude that writes about a new song per day.  So I’m sure the whole pandemic era has got him backed up a little bit, but fret not dear readers, dear friends – I’d wager a bet he’s got all the plans in the works to rectify that.

So…what can you expect on July 8th this year, when his brand-new single “Covered In Blood” comes out?  THE HEAVIEST OF METAL…you know, just like the title implies, right?  Okay, okay – I’m kidding around.  It DOES seem like that’s what you’d expect from the name of this tune, but we’re actually talkin’ about a sound that’s much closer to the…hmmm…I’d say like…somewhere in the middle of legendary artists you have known & loved for years like good ol’ John Mellencamp…Tom Petty…Pete Yorn…those kinda guys.  Not bad company to be keepin’ either if you ask me…those are names that are pretty much guaranteed to keep ya entertained, and reliably send a whole bunch of ya straight to the dance floor to shake that thang.  The most you’ll find me conceding to ya that could potentially be to his detriment (and many of you will still think this is a huge positive) is that he sounds like he could probably rock the living daylights out of a Bon Jovi cover if push came to shove & he needed to as well, and of course I’ve got my fingers crossed that he doesn’t.   Because I listen to a track like “Covered In Blood” and instantly think to myself, you’re better than that Jovi guy Sir Joshua of Ketchmark…so you know, it’s probably best he steers clear.

For real though…the man can clearly write a song, and he’s executing at a completely professional level at this point in his career.  I’m not hearing anything I’d remotely change about “Covered In Blood,” and I’m hearing every reason to look forward to its official release this July, especially if you’re already an existing fan of Joshua’s.  He’s got a great voice, he’s a smart lyricist, and he’s put in all kinds of effective hooks in this single from the music to the microphone that should have no problem at all catching your attention.  Plus he adds just that 10% more you wanna hear for the finale of this tune as well, raising the stakes that extra bit you wanna find right towards the end…and all in all, this could be quite the stunning showstopper when he goes to play this cut live from the stage.  It might be a song that draws on a LOT of the history of Rock’n’Roll that you’re plenty familiar with by now – but honestly, when you’re as ready to meet the moment as Ketchmark is, which I’d suspect is every time he goes to push record now – the radiant confidence in his material, the cleverness of his songwriting, the flawless performance he’s able to put in…it’s all gonna stack up to him continually gathering new loyal fans each time someone hears what he’s capable of & how he goes about doin’ his thang.  It’s all very natural, all very real, pure, and clear…it’s easygoing to a degree, but don’t go mistakin’ that for any kind of laziness – it takes real WORK to get a song to come out as smooth from start to finish as you’ll find “Covered In Blood” does.

Joshua Ketchmark has a great vibe goin’ on…he don’t need no confirmation from me to know that by now at this stage of his music makin’ – there’s thousands upon thousands of you out there that have already passed that information onto him already I’m sure, and I’m as confident as ever there’ll be a whole lot more to come with the release of his next record.  He’s as genuinely professional as they come I tells ya…and he’s been a true pleasure to listen to – I’d be circlin’ the date of July 8th if I were all of you.

Until that day arrives, make sure to find out more about Joshua Ketchmark at his official website at:  https://joshuaketchmark.com/