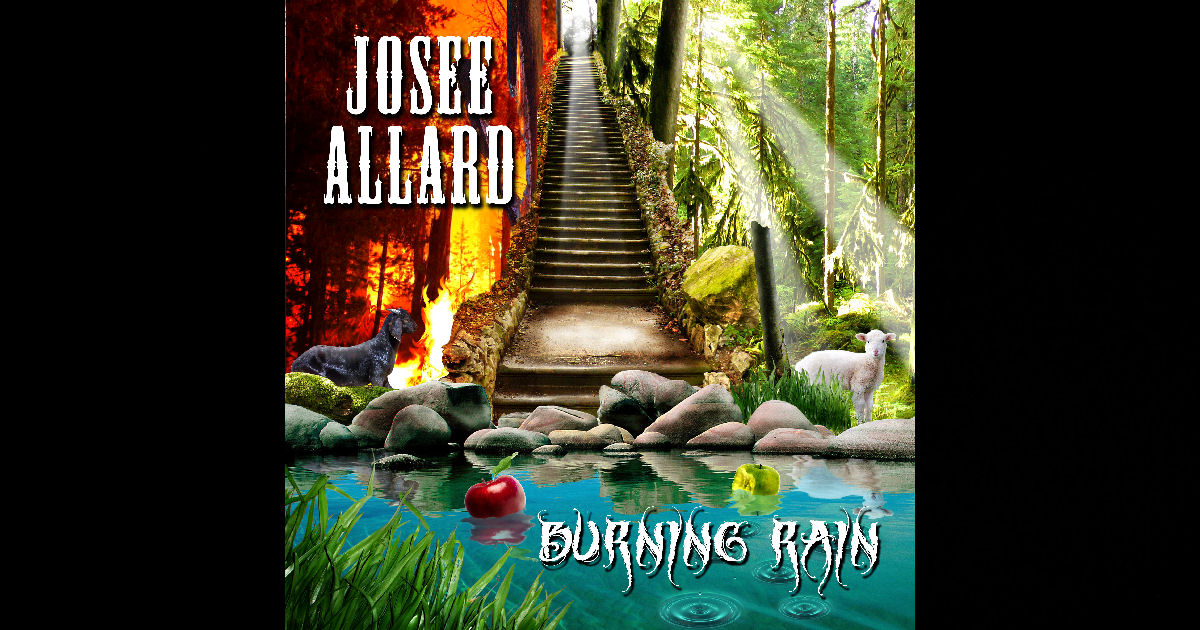 All day long Josée Allard…I could listen to ya all day long, no problemo.  What a great vibe you’ve got!

Extra fun-fact for ya, she also happens to originally be from the same home province as myself, good ol’ beautiful British Columbia – Josée is from Powell River.  According to what I can find online, she up & took her talent down south to the USA, also securing a spot handling the programming for a historic theater out there in New York, where she settled down for a while and got all serious about finding that next-level of her career.  I mean like…you know…serious about the work & all, you know, gettin’ it done – for those that know Josée from her live performances, you know she loves comedy & uses it as an asset from the stage when she plays…so like I said, serious about the quality, but the rest, is pretty chill. 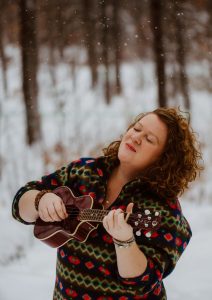 Her new Burning Rain EP comes out officially on May 11th, 2019 – so we’re here to spread the word in advance.  We’re less than a month from the date though, so mark those calendars – Josée Allard gives you plenty of reasons to look forward to the month of May this year from what I can hear on this brand-new record of hers.  Impressive right from the very first seconds you’ll hear, the music is as enchanting as it is enticing as the smooth beat of “Love Is All We Need” kicks in and…what I believe is the ukulele that we see her playing in the picture on the right…that’s a magical instrument right there is what that is.  Of course, any magic is subject to the strength of the magician that wields it, even when it comes to music; Josée Allard proves to have a master’s touch when it comes to stunning songwriting, vibrantly colorful music, and gorgeously expressive vocals.  The complete package, she most certainly is; I’ve had the luxury of listening to the rest of the EP already prior to me writing this of course – I know what’s coming, but still, I could have told ya right here from song one that Josée is professional as it gets & ready for that next-level she deserves.  As far as the vocals go – I was already loving her voice from the intro in & very first line, but it was the way she so fluidly tackled the melody in that supporting second line in each verse that was the clincher for me.  Josée has that willingness as an artist & musician to dive right in there & effectively use her voice to drive a lot of the melody, sometimes alone in the lead, sometimes surrounded by colorful harmonies…at all times, everything you’ll hear from the echoes of her vocals to the most bold moments where she goes all-in, she immediately creates a vibe that connects on her first tune.  And for real – props to the bass & guitars…as this song progresses, like,  there’s just so much flavor in the music here, you couldn’t possibly ignore it – and with the added sentiment of love sprinkled all throughout the lyrics of “Love Is All You Need,” why on earth would you wanna?  Dig on this people – Josée starts this EP out with remarkably inviting sound that will absolutely keep you listening.

Like, take the incredibly accessible hooks she’s written into the chorus of “I Remember You” – Josée sounds as timeless as she does relevant for the right here & now – this is a highly memorable rhythm & groove that she finds in the soulful sway of vocals & melody making a maximum impact on ya throughout this sweet second tune on Burning Rain.  She’s got Jack Johnson listed in her influences if you look at her social-media pages out there…and I mean…you see…there’s sounding like someone, and then there’s full-on being someone…and part of me honestly suspects that Josée Allard might just be the real female Jack Johnson incarnate, it’s kinda crazy really.  There’s a more soul-driven sound at the heart of “I Remember You,” but that stunning level of pure-chill in the vibe, melody, and music…that’s very similar to the highly enticing, relaxed style & comforting sound you’d expect to find from Johnson for sure.  Guitar solo is filled with exquisite tone, the verses glide & flow with impressive smoothness, the smart background elements that give an added sparkle & shine to “I Remember You” – all of these elements stack up to another excellent, extremely well written tune.  From the fluid transition from verse to chorus alone, this song should impress ya – but I’d be lyin’ to ya if I said it wasn’t the chorus that the people out there are going to take with them, long after the song has stopped playing on their stereos.  She’s found a highly memorable moment that people can sing along with here on “I Remember You” – and you know that’s always going to work in an artist’s/band’s favor; I might even be looking at this song as a potential single to lead listeners into the record, were I Josée Allard, just sayin.’  😉

So look…clearly, I’m loving this record so far…but what if I told ya it STILL gets better?  She puts in a breathtaking performance on her title-track “Burning Rain” – there’s literally no way to decide which element or aspect of this song you’ll love most.  The vocals are without a doubt some of Josée’s best, the instrumentation is compelling, interesting, and really smartly crafted to a unique blend that’s seriously attention grabbing.  You could make an argument that this is the most ‘serious’ side of her sound when it comes to this particular record…but this…THIS…I mean, “Burning Rain” is spectacular, straight-up, full-stop.  Musically, it’s more than interesting with its spread-out sound, keeping the ingredients minimal for the most-part & using each note, beat, and tone to its advantage; the clarity is astounding, and the intensity, even in the quietest moments, continues to stoke this subtle slow-burning emotional fire.  “For reasons that I can’t explain” – that moment, right there, I couldn’t possibly agree more…but I’m gonna try…  There’s a magic in the way Josée shifts her vocals into the chorus of this song that I absolutely couldn’t take my ears off of…it’s a truly spectacular part of the song that damn near stops time around ya while you listen.  And for me personally, it’s the power & weight…the sheer strength of the songwriting of Josée’s words & performance on “Burning Rain” in the chorus of her EP’s centerpiece…that like…if I had ANY doubts left whatsoever somehow that she was the ‘real deal’ – they’d all be silenced for sure at this point.  She’s had me on her side from moment one of this record though – that’s a fact; while I don’t know if I can even fully pinpoint or explain it myself, “Burning Rain” just completely nails it for me…quite likely my favorite from a whole set of high-quality tunes.  Awesome vocals from Josée on “Burning Rain”…she gets so much emotion into her words, it’s beyond impressive.  She’s done the title-track of this EP the true justice the centerpiece of a record deserves to have, 100%. 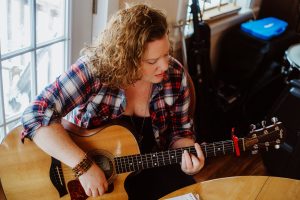 Outdoing the title-track on this record though…that would be a tough challenge for anyone out there, let’s be clear about that from the get-go.  Quality-wise, Josée never drops the ball, not even once, not even close – doesn’t matter what song you’ll hear, she’s clearly putting her heart & soul into every moment you’ll hear.  So while I might feel personally that “Burning Rain” is where it’s at for me highlight-wise, arguably I can hear that ANY of these songs could speak to a variety of people for a variety of reasons, you feel me?  And I even say ‘might,’ because I could totally get that any of these songs of hers on the right day at the right time would be the freakin’ cherry on top.  We all have our favorites, that’s only natural.  What I love is that her professionalism never lets up, the songwriting is always spectacular, and the performances on this record are as dedicated as they get…and it’s kind of a result of this, that no matter what kind of song or style you’ll hear from Allard, she’ll pull you onboard, cause straight-up, she’s bold when it’s called for – but overall, the remarkable charm in her music has an inherent sweetness to it.  “Simply Can’t Move” has a quaint & pleasurable sound that draws from Country, Indie, Folk, Pop…I mean, really, you’ve gotta give Josée much credit for having such a diverse palette of styles & sounds she can pull from – and you’ve gotta admire her for the fact that she genuinely seems to wear each of these new suits like they were tailor-made.  Ultimately, I can’t deny she’s written another beautiful tune here… Josée has that rare ability to truly communicate joy through music in a sincere way that listeners would never question, because you can totally feel it through a performance like she puts in on “Simply Can’t Move.”  Songs like this one verify & confirm she’s every bit the free-spirited burst of happiness & sunshine you’ve been hearing in her all along – “Simply Can’t Move” brings that sweetness to full bloom.

Or at the very least, on the first spin, you’ll think “Simply Can’t Move” might be as sweet as it gets – but that’s just because you haven’t reached the last cut just yet.  Where sweetness absolutely reigns supreme is on the final song called “Harmony” – ya might just need your toothbrush for this one, lest ye get yourselves a cavity just from a listen or two – you’ve been warned, that’s the level of sweetness & pure intentions we’re talking about here.  That being said – what kind of MONSTER would go about hating on a song like this?  I’ll admit, I might be a sour, old, grey-bearded dude at this point…but c’mon people…intentions MATTER; I’m not remotely about to bash on a sincere effort to unify the people through love, peace, music, and of course “Harmony” – that’s all-out awesomeness & gets a full salute from the guy on this side of the screen.  As naturally resistant as I am to songs with such a friendly disposition – I dunno…I kinda felt powerless against this final song… Josée’s got me in her corner by this point of the record, without question.  There’s just something absolutely remarkable about the way she sings the songs she writes…the kind of lively & inspired connection to the material & music that you honestly don’t just hear in every second artist; what she has to offer us as listeners is so much more rare than that.  Songs like “Harmony” reveal that specialness of Josée as an artist in an extraordinarily sweet & humble way… she sounds right at home, blissfully thriving in the beautiful comfort of her music & basking in the warm glow of the endlessly charming sound surrounding her, right where she belongs.

And if that doesn’t make for a fantastic way to conclude a record, I sincerely don’t know what does.  Gorgeous record Josée – really well done.

Find out more about Josée Allard from her official homepage at:  https://www.joseeallard.com