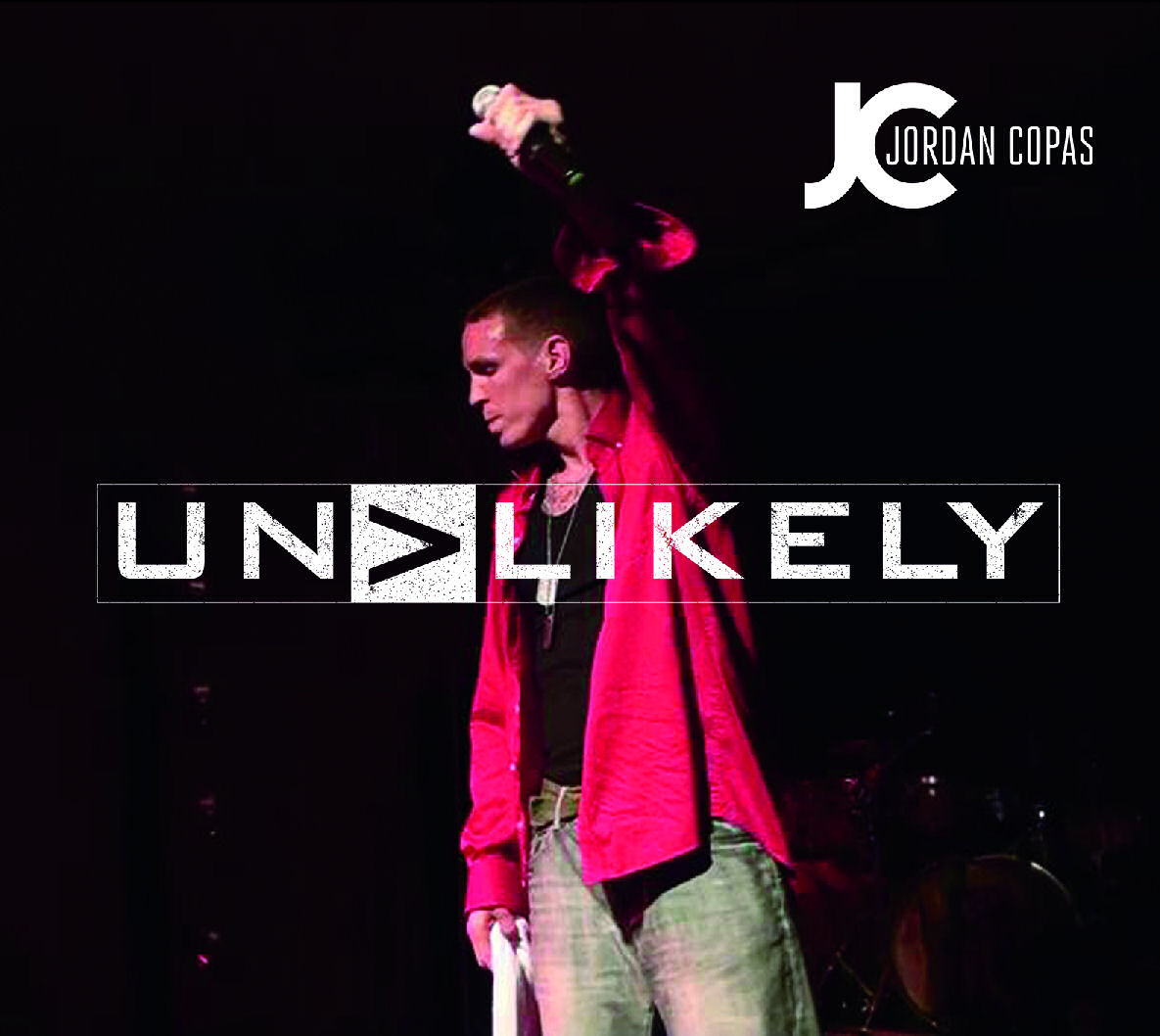 Lightning-quick emcee & solo-artist Jordan Copas puts on an atmosphere of attitude & determination in the opening track “Small Town America” on his new album Un>Likely.  Even the album title itself is a reference to the idea that he’s gotta beat the odds to make it, coming from a “Small Town America” and knowing that success is Un>Likely – but knowing at the heart of the matter, these dreams of his aren’t completely unattainable.  The world still proves daily that hard-work, determination, talent and attitude can lead you to the wildest corners of your own imagination…it takes focus…sometimes it takes years in the trenches, sometimes it doesn’t…but those opportunities to break-out in music & entertainment still exist all over the place.  When you make music that jumps out as dynamically as what Copas creates…there’s more than a good chance of the people out there taking notice; whether it’s the beat or the words, the hooks or the flow – Jordan puts in a performance that really commands respect for the emotion and passion you can hear behind the power he’s putting into the words.

And don’t get me wrong…I’m not hearing “Small Town America” and thinking it’s particularly new in what is being written about…many people share a similar story and making it out of the small-town is an idea that’s been explored many times in hip-hop/rap-culture throughout the years.  There’s a reason that the subject still comes up continually in the genres even after all these years…and that’s because the struggle, for many, is still very real.  So while it might be a subject that’s been covered in many songs out there…it’s still a very relatable topic, and when you can hear the connection to the words like you can hear from Copas, it makes all the difference in the world.  You can HEAR that this is a real shot for him to put his music out there, to make it…and I think you kinda start cheering for Jordan Copas by the time you hit the meaning of “Small Town America” and what this guy is all about – because you can hear how important this dream of his is from the way the words come out of his face.  Sincerity…and heart.

I was kind of thinking to myself just about how much this drifts closely to a rap/rock kind of thing, even with all the electro-stuff happening around it all…and just as I was doing that, I noticed that the next track “Activated” is actually gonna make a comeback at the end of the record in a ‘Rock Remix’ – so there you have it…I can’t be too far off in thinking that.  I think “Activated” takes the music of Copas to the next progression and logical step by ramping up the energy on this second cut, but also making the hooks start to dig in a little bit deeper.  While it might slightly move away from the personal-spin on the music that “Small Town America” reflects…it also serves well to hear early on in the record that we’ll get a good mix of both personal and pleasurable tunes to listen to throughout the rest of the album.  If anything…vocals might be up just a little bit too much in the chorus to make it really explode with the energy it should have…but the rest is extremely sharp.  Copas raps confidently, quickly and right on the meter with ease…against the EDM & glitch-filled synth-background & strings…”Activated” definitely has a lot of pull to its hooks and a stylish flow that stays right on-beat & right on-point through the entire cut.

The following two cuts really speak to the depth of the lyricism on this record from Copas, but also to the music and the talent surrounding him.  The guy seriously understands how to work the bars but also how to find the right samples & combinations/collaborations to get a really effective beat to rhyme to…so you get the maximum effect of the words because they all find their way to the perfect setting, and Copas himself makes sure they all stick, bounce, pivot & flow in the right directions.  Even in the tough narrative that drives “Diamond In The Rough” he finds a way to really tackle the words with a real authenticity…the story certainly sounds real, not over-exaggerated or blown out of proportion…real…raw.  Chances are it’s detailing a lot about the places Copas has been to throughout life and looking to leave behind as per the intentions of “Small Town America.”  Great assist from BenTru on “Diamond In The Rough” though; and I think the album gets even stronger with the ultra-personal “This Letter’s For You.”  Excellent piano melody-line in the music, solid beat that comes through…and Copas is on fire in this performance.  Even though the song itself feels like it’s a slowed-down melody, Jordan doesn’t take his foot off the gas and delivers precision-rhymes overtop of a seriously stunning beat to take on.  Awesome work from Jason Strom & the chorus hook on this cut really keep “This Letter’s For You” standing out as a huge contender for a single when you combine it all with the verse and the structure & flow to it all.  Definitely a song I think a lot of people would completely connect with whether identifying with Jordan’s story, or just digging on the incredible beat – there’s a way into this cut for almost everybody out there.

“The Forgiven Felon” dictates exactly how real that struggle IS for Jordan.  I’ll admit that as a track, it’s a little bit uneven in the jagged way it flows, but that also really does a lot to represent the massive chip the system has put onto Jordan’s shoulder.  Aside from that…it just takes a couple repetitions through the album and you’ll realize that a track like “The Forgiven Felon” is a lot more like a dramatic performance, combining spoken-word and rap cleverly, doling out the lyrics in ways that hit-home and really make their points known.  I admire the ambition of the track…I think it’s a little unexpected after what you’ve heard throughout the first four tracks, but I think that it’s good to be mixing it up enough to keep us guessing.  “The Forgiven Felon” is a real artistic approach to rap & hip-hop…I can dig it.

Again…listen to how smart this record is in the music-flow.  “Greatness” has a huge, uplifting sound to it and Copas brightens-up in the overall sound, still spitting out pointed-rhymes in the direction of those that have held him back along the way, audibly sounding determined to prove them all wrong and realize his full-potential.  I think the hooks provided by Aubrey RodirgueZ in “Greatness” are massive ones once again, and I think that Copas brings his A-game to each verse he’s got, sounding like it’s a life or death situation…or maybe make or break is a better way to put it.  You can hear “Greatness” echoes that sentiment of his intentions to free himself from the past and become the better version of himself that he’s always known had the potential to exist.

He carries the victory on strongly into “More Than A Conqueror” which might very well be my favorite cut on the record.  There’s such a huge feeling of empowerment on this song…such a massive feeling of unity and release…this is the anthem, throw your damn hands up – know what I mean?  Copas raps with impressive speed and precision, detailing the positive spirit that drives us all from within, often professing his faith in the process, but not so preachy that anyone outside of religion wouldn’t still be able to dig both the lyrics and the music.  The combination is absolutely huge…”More Than A Conqueror” certainly makes you feel like you could take on an entire city.  “Amazing Grace” is equally impressive, once again returning to the seriously impressive hooks in the chorus from Josh Gilder that really work magic in these tunes on Un>Likely.  A track like this, with the brightness of the vocal-hook meeting that huge swell in the low-end…is such an awesome experience to hear.  The low-end beat in general, just supremely mixed here…whether it’s Copas or the other vocals lining the track, everything fits in stunningly on “Amazing Grace.”  Back-to-back seriously powerful tunes.

Jordan Copas could very well be the strong voice that religion needs in music.  Quite often, it’s not represented with enough skill, despite the passion for the subject…but that’s not an issue with Copas.  The guy has complete flow, skill, style & talent…and I think he’s mixed it in well on a track like “Heaven” – the combination of music & message is strong here.  Being outside of religion myself, it’s always interesting to hear the perspective of the faithful…or at least it is in my opinion…I was raised religiously, and also to really listen to others.  Just so happens I applied myself that way, just happens to be music – but I do listen!  I’ll say this…I think between “Heaven” and “Little Girl’s Prayer” coming one after the other, the album reveals that religious content a lot more than it seemed to at the beginning.  Might just be that I’m more in tune with the message overall now – but I still hear the weight of the religious content happening in the last third of this record more-so than the rest.  And I don’t think that it’s due to Copas disguising his faith in any way, shape or form – he’s clearly ready to put that on display and into the music plenty throughout this album…but again, he’s done it all very naturally & sincerely; I’ve never felt like I was ‘preached at’ and the content has continued to be entertaining, never once turning me off.  So religious, not-religious…it doesn’t matter…you can get in on these tunes and really still feel the vibe.  Speaking of that, really liked the jazzy-vibe that the album ends on with “Little Girl’s Prayer” – the roll through the verse is smooth as it gets and overall, it’s the kind of track that really puts a smile on your face…one of those songs that makes you appreciate the beauty in everything all around us.  Good combination here at the end between Copas and guest-star Mikey Johnson, ending it strong.

The “Activated (Rock Remix)” does well to keep the song intact and amplify the hooks a bit more in that direction…though to be honest I think I felt like I could listen to either version and be happy with what I was hearing.  Might lean a little towards the original, but there’s no slagging this second mix, it makes sense to punch up the song this way and it’ll grab the attention of a few more people with its added aggression in the mix.  Overall though, I don’t know if it needed to really be on this record twice essentially, I guess that’s what I’m saying.  BUT!  There also seems to be an extra song…maybe something like “Kid Not A Killer” which is a real treat as a bonus I didn’t see coming.  A little more directly political on this final jam, Copas really spells out how he feels on this final cut, once again finding a compelling track to rhyme on.  It’s quite personal as well…you can hear that the words have made that real connection to Jordan once more…and I like that we can hear how important a lot of these words have really been to him throughout this record.  He puts a lot of thought into his rhymes from the words to their layout, pace & metering…his performances have been nothing short of professional in their approach and delivered with passion & precision.  You might very well expect the next album will see this guy going from Un>Likely to Sure>Thing after what you hear on this record.  Solid & entertaining, all the way through.