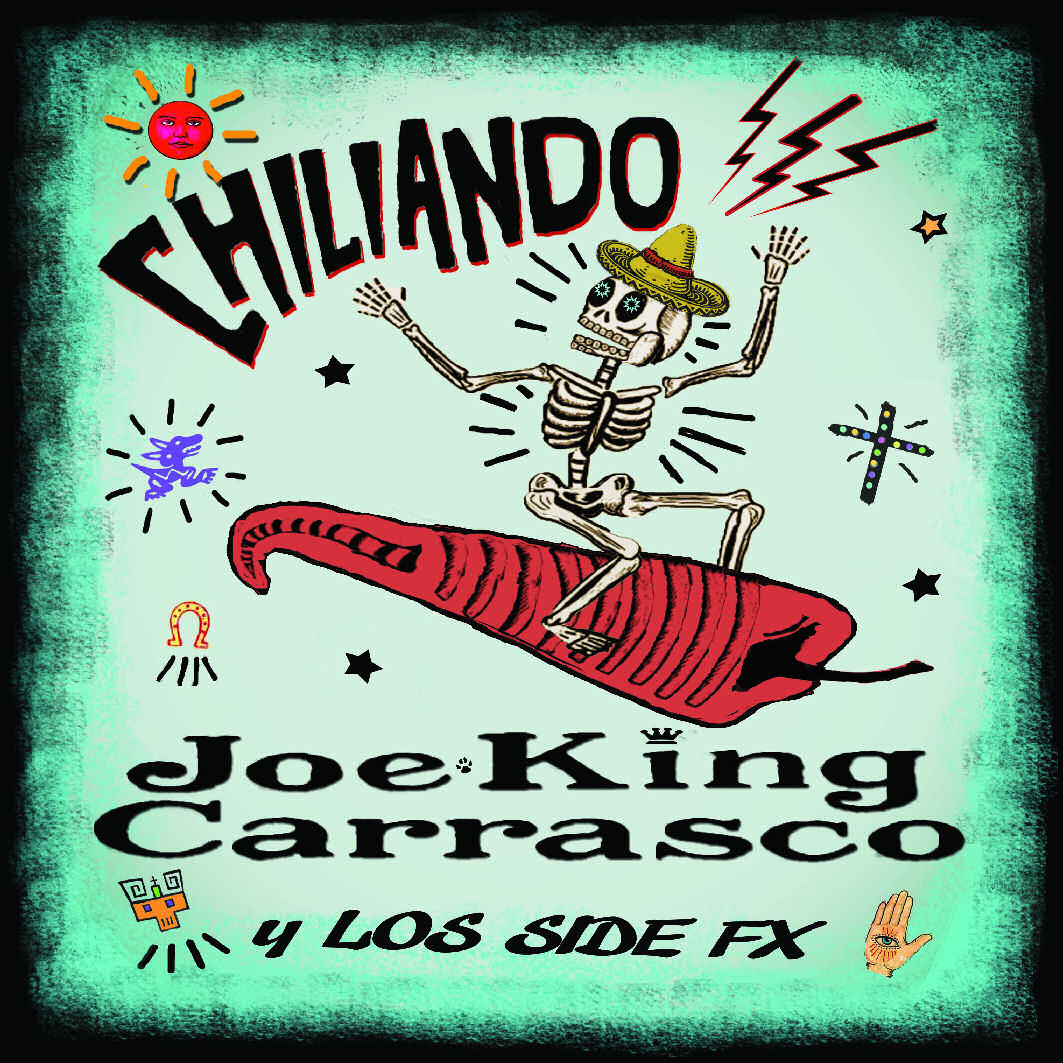 Well…I might not know much, but I definitely can recognize the sound of a good time when I hear one!  Self-described as ‘Tex-Mex infused Rock’n’Roll’ – I can’t recall having that on our pages before, so this should be interesting to say the least.  I’ve got my hands on four of the cuts from their latest record Chiliando to check out…and it really didn’t take long into “Tequila Revolution” to get a great snapshot of what this band is all about; it’s clearly party-time.

And it’s also impossible to not hear the influence that a band like The Champs would have had on Joe King Carrasco & his crew when you hear a song like “Tequila Revolution.”  It’s also got that somewhat “Oye Como Va” from Santana vibe going-on too…add in some big chants for everyone’s favorite alcohol, an invitational style and proficient musicianship and your weekend begins on whatever day/time it is with “Tequila Revolution.”  While I’m not necessarily convinced it’s something that hasn’t been explored many times in music throughout its history – I also can’t think of many out there that are making music with this kind of style & flavor right NOW…but I think both those facts can play to Carrasco’s advantage.  The sound of “Tequila Revolution” feels familiar; but without it being a sound we’re regularly bombarded with in the mainstream all the time, a song like this becomes instantly welcome to our ears for its uniqueness by comparison.  Plus it really is FUN; I wouldn’t take anything away from the smooth groove of this first tune I checked out from Joe King Carrasco Y Los Side FX – “Tequila Revolution” has a very invitational and widely accessible sound that stems right from the passion they play it with.

I can’t say for sure if it’s based on real-life experience or not…but I kind of had to grin when I realized that on the full-album of Chiliando, “Tequila Revolution” flows right into “Arrested In My Hammock.”  Keep that in mind you tequila-loving-revolutionaries out there…this too, could happen to you!

Truthfully, that might not be such a bad thing at all.  Employing a more rock-inclined approach to this tune, they kind of blend territory between the Stones and Joe Cocker on “Arrested In My Hammock.”  The structure itself is more like a Cocker song, especially when you add in the brilliant backing-vocals into this tune…which for me, stole the show here amongst what already sounded impressive.  The lead-vocals give off that more Stones-esque flair for groove-rock and a similar mix of tone & growl in the singing that ends up sounding loaded with charisma and electric in performance.  The music is reliably well-played…it doesn’t take much to realize there’s tons of talent here at that the technical-side of what we hear is all going to be professional…Los Side FX hold their own in every department with confidence.  Those female backing-vocals absolutely stood out as wild & amazing…the lead-vocals have a real grip on our attention as well and “Arrested In My Hammock” succeeds as being a solid rock-song to listen to that again draws on the serious amount of passion, fun & entertainment this band brings to their music.

The album’s title-track also delivers a smooth, Latin-infused atmosphere that has a large degree of accessibility and welcoming sound.  “Chiliando” has excellent rhythms in the percussion that lead the song to be just as entertaining as it is through its overall chilled-out vibe, great guitar-work and a recognizable, defined chorus that’s perfect to sing along with.  The opening of “Chiliando” pulls you in right away…excellent atmosphere in this song and musicianship that shows tremendous skill in its structure and writing.  As seems to be the standard with Joe King Carrasco Y Los Side FX, they elevate the sound of the music’s degree of familiarity into something much more their own by the passionate and professional way they play it.  “Chiliando” is no exception to that rule.

“Adios Terlingua” was the final track I checked out from their new record…and probably the best spot for me to hang-up the ol’ spurs and grab me another round.  Hardest kind of song to comment on as a reviewer…I can tell you it’s as well-played and performed as any I’ve heard so far on the Chiliando record and that’s a positive.  On the other side of the coin, Joe King Carrasco Y Los Side FX tip their sound/style fully over and into the standard blues-rock formula here that it’s impossible to ignore.  The comforting familiarities of what we’d heard previously still had much of their own personality, attitude & ideas on display…but this last tune to me was one that relied on tried, tested & true standards that took a lot of their own identity out of their sound.  “Adios Terlingua” worried me a bit in the sense that it’s the song that comes latest on the actual record of the samples we’ve got here…and while still providing a pleasant listening experience, almost hints at running out of ideas at the same time.  Again…always important to consider which songs are being sent out to draw us in – and while I think that “Adios Terlingua” is a song that people wouldn’t turn off, I still wasn’t convinced it was the right choice in terms of getting us excited about the record as much.

So overall, I’d say there’s large potential in Joe King Carrasco Y Los Side FX’s music…and I think if they continue to reach for their own identity & sound and keep the focus on what they can bring to the style of music they make – and branch-out from the reliable standards a bit more perhaps as well – that they’re gonna do just fine in the long run.  People love a great party band and sound like this; what they’ve got started sounds solidly produced & performed and over time & experience could really end up filling a niche out there in the music-scene that people will truly connect with.

Find out more about Joe King Carrasco Y Los Side FX at the official links below!