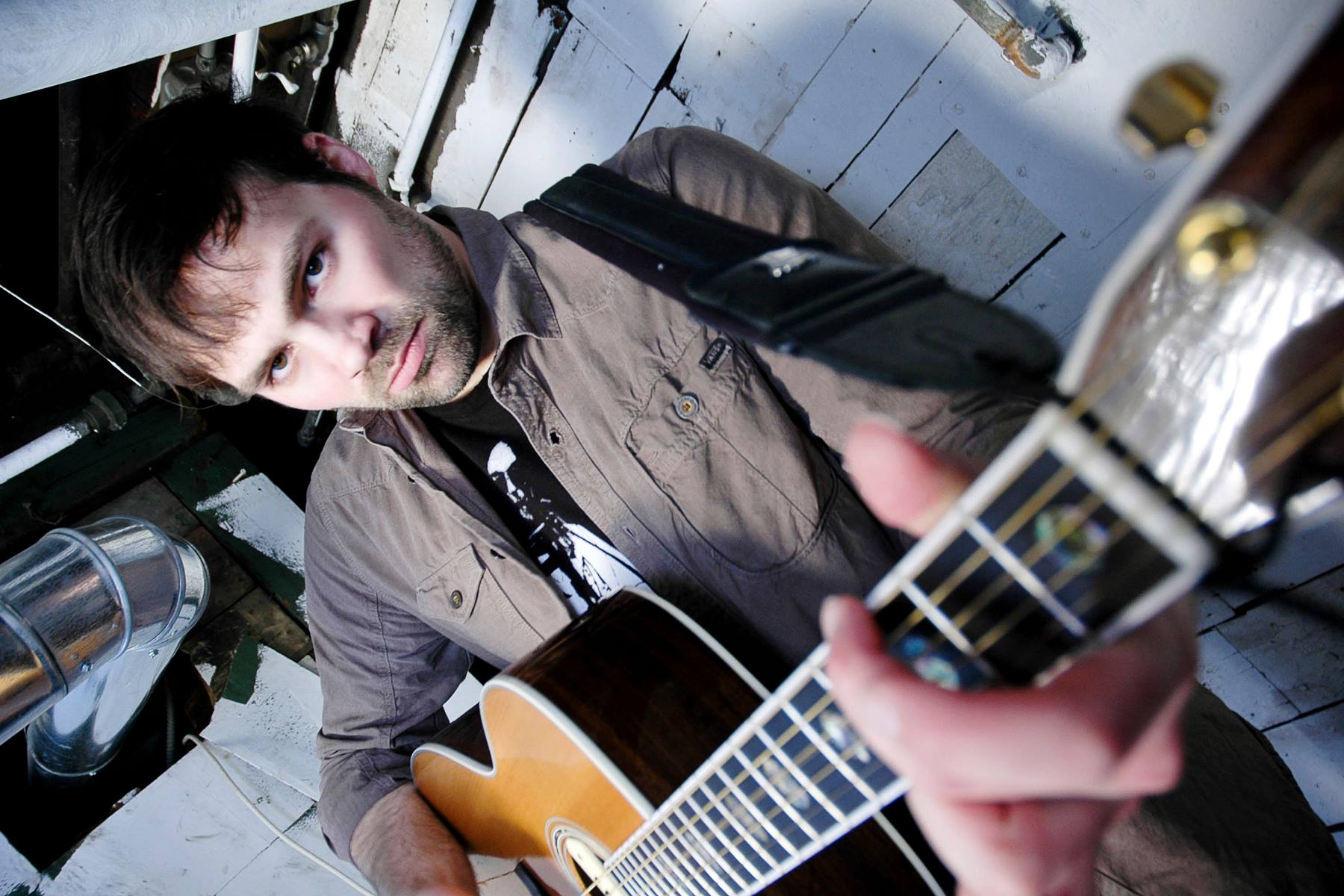 More than impressed with what Jesse’s doing here on his latest EP Primal Scream. Dude is a hell of a songwriter…and not only am I fortunate enough that his talents reside inside a style of music that I can’t get enough of, but as it turns out, Jesse’s not alone and has an entire band of talent supporting him on this new EP. I mention this…because everyone on this short & rad record needs a damn shout-out – this Primal Scream EP is apparently really doing it for me…ye olde music-chubby is pointing boldly northwards…a strong indication that there is in fact, something truly special here in the music Jesse and his band are bringing to life. As loose as it is precise in both emotion and performance – Primal Scream is kicking my ass both lyrically and musically with an impact nearly as strong as I found in the music of School Friends and their album Coma from last year, which went on into my top-ten of 2015. Here in 2016 – right now, I’m hearing the grind of raw-ideas in rock that are seriously realized through the way this band has approached these tunes from Jesse W. Johnson. I’ve got a lot on my plate to review & listen to this week coming up…but I can tell ya right now, this new EP is pretty much all I want to hear.

This EP will only get sicker and sicker as it plays. Beginning with the title-track “Primal Scream” you instantly hear the tribal-pounding of the drums of Zach Benkowski’s heavy hands laying the thick beating to the drum-skins…the guitars instantly grind & shine at the same time and the vocal-flow starts out with a somewhat classic-vibe. It feels familiar in the sense that it would tend to remind you of bands like The Replacements or perhaps even Cracker…or like, an aggressive Pavement; the hooks are there and they’re sharp…”Primal Scream” is a musical-declaration of Jesse’s arrival. It’s a wicked opener that shows the tightness between the band and that they’re certainly ready to entertain – but I’ll vouch firsthand for the fact that there is SO MUCH MORE to come through the songs to follow that they’ll nearly silence this “Primal Scream” by comparison. That simply speaks to the excellent writing you’ll find on this record and the sharp dynamics & versatility this band lets out over these five tunes – ain’t nothing wrong with the title-cut…just happens to be even more incredible material around the corner is all!

Take the alt-country-rock tune “Fucked Up First” which is a complex-beauty of a song that finds its way to an incredibly accessible hook with lyrics that you can’t help but find yourself relating to…errrr…I mean…singing along too…yeah…yeah that’s it. Okay…maybe both…

What a freakin’ gem though! “Fucked Up First” has that great indie-energy, spirit & sentiment to it in the sense that, even though it’s Jesse admitting the fuck-ups here…you still feel the sweetness & genuine regret in the emotion that fuels the lyrics in his voice as he sings. Big shout-out to Yoo Soo Kim who takes the viola into the EP I believe for the first time on the record up to this point…I could be wrong…she could be more subtly-hidden within the rock of “Primal Scream” – but in any event, she really makes the music of “Fucked Up First” shine bright. Great writing once again…you might not expect it in a song called “Fucked Up First” but I can tell ya that most musicians wouldn’t make it through this sucker easily – Jesse and his band-mates prove they’re really in this together on this second tune with it all brilliantly coming together. More props to Paul Doerr for a seriously-rad, elastic bass-line that pops through to the top of the mix every so often…they’ve done a great job of that in this particular track – it feels like everyone gets their moment in the spotlight. But in saying that…I’d be lying to you by omission if I didn’t confess to “Fucked Up First” really being brought home by the magic in Jesse’s voice and vocal-melodies…cause that’s the stone-cold facts – I love it all, but it’s that chorus that really makes the hooks sink in deeper-than-deep.

Kim and her viola also make the music of “Why Aren’t We In L.A.” reach extraordinary heights. A little more into the folk/pop end of rock – this tune becomes a tender & gentle rhythm immediately. Set to a marching beat from Zach, the band sets out behind Jesse’s lead once again to conquer a new-sound and different atmospheres on the Primal Scream EP. Tied together by their excellent-execution and Jesse’s signature-style of song-writing; the song is sweet but complex…accessible enough for all, but meaty enough also for real music-lovers and musicians to really appreciate on another level entirely. The work has clearly been put in here by Jesse, Paul, Yoo Soo and Zach…and the results continue to amaze and astound the further you dive into this record.

Because what? What am I supposed to do other than profess my love for the grinding epic that is “Springfield Supportive Living?” You want me to lie to you? You know I’m not gonna…and I…can’t…hold…back…much…longer…………….

THIS SONG IS FUCKING AWESOME.

“Springfield Supportive Living” has a huge swell brought on by the writing…and it all builds to massive proportions and musical highlights. Perhaps a little more desolate and dark through the lyrics than the rest, this second-to-last track really nails it solidly with a heavy groove & grind that brings the very best from the guitars, bass and drums. Subtly in the background…there’s more additional sounds in the atmosphere…”Springfield Supportive Living” is a scorcher and expertly assembled. Really smart mix on this track…definitely credit to the production department for getting the most out of the stunning approach that Jesse’s taken to the dynamics of this tune – everything on a cut like this screams-out the ol’ 100%…so damn good. The guitar solo…MAN! Loved it. Much like a brief insertion of a massive post-rock influence…there is a ton working in favour of “Springfield Supportive Living” – so much that it’s impossible to not acknowledge this as the extremely impressive tune on the Primal Scream EP that it really is.

You know what really harshes my musical-buzz though? It’s not the fact that Jesse stripped it all back and took the last song on his shoulders for the call-and-answer nature of the final tune “Expecting To Fall” – no…we’re all good there; it’s that the song that keeps coming up on Soundcloud afterwards by whatever freakin’ band that’s NOT Jesse’s is TERRIBLE and it won’t quit playing the same one each time I get to the end of this EP! So yeah…to be clear…nothing at all Jesse-related really…I suppose that’s just me venting it out for a moment. Good talk, thanks.

The fact is…”Expecting To Fall” is the perfect culmination of this EP…the five songs are laid out in a stunning order that lets this album breathe progressively as it plays from beginning to end. I absolutely love the sweet-nature of the final tune’s sound with just the guitar and Jesse together…but like you come to expect with this guy from listening to his lyrics throughout the EP – you know nothing is completely point A-to-B with him, and soon enough, he’s joined by his stunning band once more to end this EP with the epic payoff to their dedication, hard-work and incredible performances. Love the way that Jesse sings this one…he makes these words spring to life with power, confidence and scattered-emotions weaving a strong texture and tapestry for him to really let loose with. “Expecting To Fall” absolutely ROARS to life before it ends…before stripping it all back once more to end the Primal Scream record in sheer brilliance on a sweet guitar tones that send you off perfectly…on your way to making sure you’ve checked the ‘repeat all’ button on your music-player. AWESOME stuff here – I loved this.

Definitely recommend checking into what Jesse is up to at his official homepage…this dude is going places for sure: http://www.jessewjohnson.com/