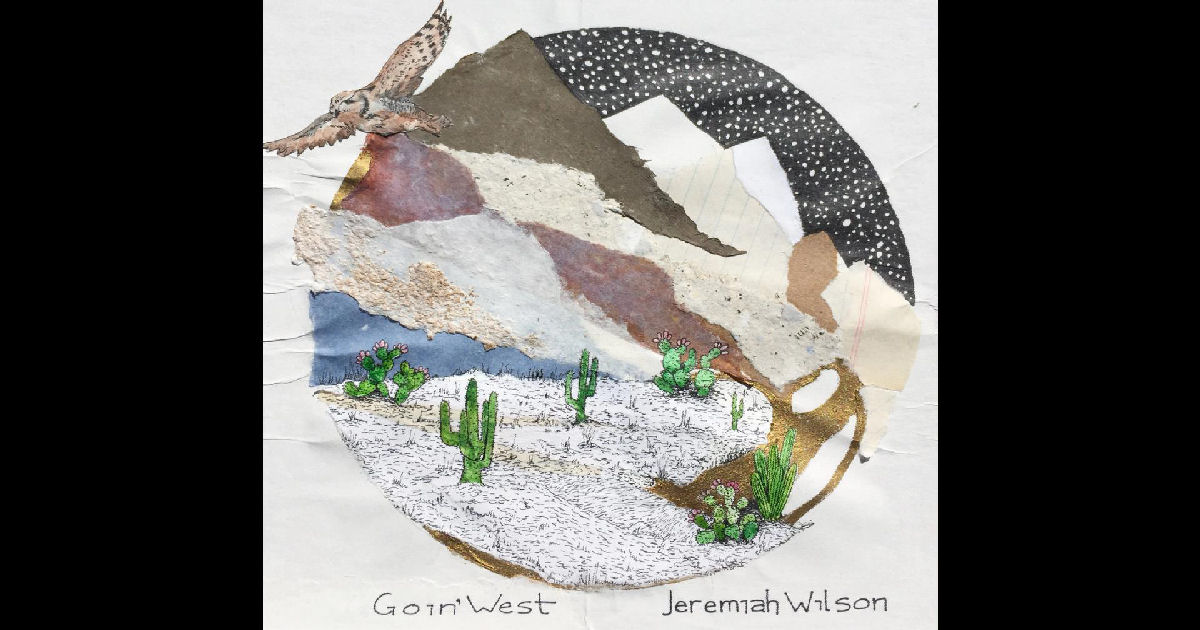 If you’re living in Canada like we are right now, this new single from Jeremiah Wilson is more than appropriate for the right here & now.  Not even kidding, it’s almost May at this point and I think there’s still about another day or two to go before the snow will finally be gone outside of the studio here.  Put it to you this way…winter has lasted so long here this year that half of us at least I’m sure have been convinced by now that it’s no longer the winter of 2017 at all anymore, but the new one of 2018 already.  “Winter Came Early That Year?”  So far it feels like it never even left.

But enough about the weather…you’re not hear to read about whether or not I still need a snow-shovel on hand to dig myself out.  New single!  Jeremiah Wilson!  “Winter Came Early That Year!”  Let’s do this!

Love it!  I’m quite impressed with this song from Jeremiah’s upcoming EP called Goin’ West – “Winter Came Early That Year” is gentle, pleasant, inviting, chilled-out…innocent, humble…there are tons of adjectives that could be used to describe the tender sincerity you’ll find in Wilson’s sound & music.  A quality folk-indie sound on all-fronts, loaded with melody & sweetness, “Winter Came Early That Year” has an exceptionally comforting demeanor, kind of similar to what you’d find in the more serious songs from the Fountains Of Wayne catalog when they were at their most focused and heartfelt.  If you’re familiar with the band, you’ll definitely hear the similarities…you could also compare something like…artists like Josh Rouse or Elliot Smith would likely be appropriate references as well…indie-folk yes, but also with those important pop-inclinations in the melody that make the music widely accessible – that kinda stuff!

For me personally, there’s nothing about this song that doesn’t work.  I think Jeremiah sings it extremely well and I didn’t feel like he overplayed his hand even once – he’s got a wonderful understanding of his range, capabilities, and strengths, and he chooses tones that are right inside all that to find a great match between the vocals and music on “Winter Came Early That Year.”  I think the sound of his voice and singing would be more than enough to pull most people in…he’s found a great melody & flow for the vocal-rhythm – but in addition to that, notice the clear hooks you can hear in the music as well.  Again, it’s not flashy, it’s not over-the-top, it’s not outrageous – it’s smart & cleverly written, designed to be heard through its brilliant attention to detail from tone to production, performance to writing.  The main guitar-hook that you hear begin the song is likely just as strong as the hooks in the vocals are to many people out there – for myself, that was the immediate gateway into Jeremiah’s new single.  To hear the vocals come out sounding so smooth and fitting for the song was like the cherry on top – I was already pretty sure I was going to enjoy this tune from its gentle melody, Wilson’s voice just made it all that much more inviting to listen to and complemented the music remarkably well.  The verse itself is loaded with enough of a captivating melody that it would catch the attention of most people out there, and the transition into the song’s chorus happens brilliantly, shifting in an insightfully organic way that slides right into it naturally, yet still raises the song to that next-level you’re looking for through the progression of tones & chords enhancing the sound even further.  “Winter Came Early That Year” becomes as charming as it does captivating, with earnest lyrics that create great imagery & emotion in the atmosphere of the entire vibe…I’m sure I’ve made my case by now – I love this tune from Jeremiah!

Honestly there’s not a thing I’d change here.  While I certainly understand it’s often an uphill battle to have a song with such a mild-mannered temperament to be heard – I also think this is why places like ours exist…to make sure wonderful tunes like “Winter Came Early That Year” don’t go unnoticed.  Sometimes we have to make a little more noise to get the delicate sounds of music the attention they deserve; it’s always been the case and likely always will be.  That being said – as a single, I think this song really works and I’ll further explain why that is really quickly, also in reference to the bands & artists I mentioned earlier on…

I latched onto the sound of Fountains Of Wayne way back in the 90’s after buying a completely different CD from some other band/artist I can’t even remember now, and I received a compilation disc with one of their songs on it as a bonus with my purchase.  It came with some other amazing unknown artists/bands at the time that no one out there knew about, like the incredibly poetic Poe, the yet-to-breakout into the mainstream early sounds of a little band called Matchbox 20, and amazing instrumental music from the Trans-Siberian Orchestra, to name a few.  When it came to Josh Rouse – I was hooked on a song he’d put onto the Vanilla Sky Soundtrack in the early 2000’s, long before that of course, the Academy Award nominated song by Elliot Smith on the Good Will Hunting Soundtrack.  Sensing a kind of theme here?  The main point being – all of these single songs and the way there were found wasn’t by listening to the radio-stations, they weren’t glossy hits covered in commercialized audio-honey – they were captivating for their own authenticity and they LASTED over the years for their honest approach and stunning songwriting.  They were on compilations and found outside of the mainstream, but they were the RIGHT songs that led to an incredible introduction into music that had qualities so strong & special that they made you want to listen to more.  That’s the way I feel about “Winter Came Early That Year.”  I feel like this song really puts Jeremiah Wilson’s music out there in a humble & sincere way that will genuinely connect with the people out there – but perhaps most importantly, once that connection is established, I think it’ll last a lifetime.

Find out more about Jeremiah Wilson from the official Facebook page at:  https://www.facebook.com/JeremiahWilsonSongs/