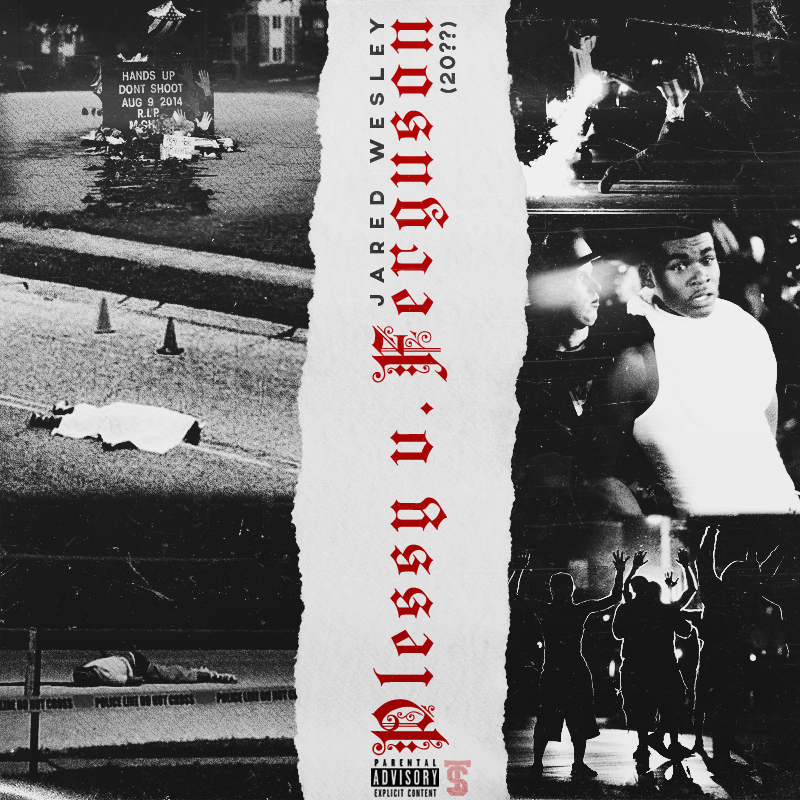 This is important. Do you like music that’s important? You might not even know, you might never have heard anything through music that packs a politically aware and pointed view like this does. I personally think that this is the biggest and most obvious hole left in music today, one left behind once Zach De La Rocha surrendered his microphone in exchange for silence in the demise of Rage Against The Machine. They made some of the most important, politically and socially aware songs of our generation; they went straight for the throat and pulled no punches. While celebrated artists like Dylan or Cohen have always layered their perspectives through metaphor, Rage went right at you, hitting hard and pointing out the glaring and obvious flaws that exist within our society’s infrastructure.

Now…this isn’t RATM musically, but this is definitely a pointed song…one that needs to be made in my opinion. Jared Wesley is a black man, and I’m a whitey; he’s from the USA and I’m from Canada – I’m positive we lead different lives, yet it always amazes me how someone can echo your sentiment from clear across a continent. Jared Wesley, through this song, is speaking for me…for himself….for YOU….and for all the people that are too afraid to speak for themselves.

I couldn’t have been happier reading the title, “Plessy V. Ferguson (20??)” – can you SEE the rabbit hole that Wesley wants you to go down here? These are the bread crumbs Hansel…they’ll lead you all the way home…just gotta follow the clues. Thankfully…that’s what I do best…I’m a musical bloodhound and there’s no escaping a title like this for me – I had to know what it meant. Now that I’ve got my research fully done, my multiple listens in…I’ve got myself what I think is a solid theory behind this track. Here’s what I think, that you might not know.

First off…at eight minutes long…what is happening in this track? You get yourself a solid rap-verse from Wesley, that actually serves as more of an intro, before diving deeply into the news-media samples that are derived from the recent fatal shooting and reporting on the death of Michael Brown. Anyone familiar with WHERE he was shot? Yep, Ferguson, in Missouri, St. Louis. So there’s your first tie-in from the clues left behind by Wesley. I continue…

What about this Plessy character? How does that get involved here? Is it the name of a homie? KIND OF. It actually refers to an extremely influential trial in our society’s past; Plessy V. Ferguson of 1896. That’s right…the EIGHTEEN-hundreds; big shout out to Jared Wesley here – he’s not only managed to make a track that’s insanely cool to listen to with all its jazzy elements, but one that really made me look into all this and THINK, not just listen. I LEARNED things I didn’t know; the Plessy V. Ferguson trial was an absolute disaster of sorts, with Plessy, a 7/8’s WHITE-man, becoming the pivotal case that would eventually lead to the upholding of the ‘Separate But Equal Act,’ based on his decision to attempt to ride the ‘white’s only’ bus. ‘Separate But Equal’ would remain in effect for nearly 60 more years before finally being repealed.

Of course, legally, yes…according to written law, yes it was. But socially…and certainly in some states and countries still today, you could argue that nothing has changed at all. Hence the samples from the recent trial attempting to bring justice to Brown’s case through the unsuccessful prosecution of shooter Darren Wilson. Am I right about this? Is this how Jared Wesley feels from his perspective and what he’s trying to communicate here in this song? I say a complete YES, confidently.

That final piece of the puzzle never once escaped me. It’s the very last part of the title that actually had me initially wondering what was up with this track; the part that reads ‘(20??).’

To know what he’s thinking now, is to know the decisions made in the past. The argument of Plessy V. Ferguson went the entirely wrong direction as well…and the main reason being, was racism existing prevalently within the United States, if not still thriving completely at the time. In fact…it was actually active in the courtroom, being presented by the same legal members that had fought to restore white-supremacy and also on the bench through Louisiana Justice Edward Douglass (wait for it, wait for it…) White. There was never an ounce of hope that Plessy would be able to pull off the argument against such a prejudicial system. Sad.

‘(20??)’ refers to a time-period we’ve yet to truly experience. With the recent shootings of Michael Brown & Trayvon Martin…there’s just no argument, we’re not there yet…we’re not even fucking close. I’m going to put Jared Wesley in the same category as myself though, despite our pigments; he’s down, but not out – there’s still hope, and he knows it. It would have been much more confusing, but the title’s end could have just as easily read ‘(2???)’ in my opinion, at the embarrassing rate we’re on as a society. Perhaps…sometime in this next 85 years, we’ll finally see the demise of the last of the racist degenerates that dominate our world…but that’s up to US, the people. Laws that cannot be upheld as justifiable by the people of our planet have got to go, and slowly, very slowly, I do believe that many of them ARE. But what I’m also very watchful and careful of, are the incredible amounts of NEW invasive and perverted laws being ratified in their stead; in the courts of law, every victory is soured by five defeats. All these laws, restrictions, borders…they’re only as real as we ourselves choose to make them. We know right, and we definitely know wrong as human beings…and for years upon years upon years we’ve let ourselves mismanage and misgovern ourselves into dumb beasts with big sticks, and now guns. It has to stop. It sucks, but the reality is, we WILL…the people…HAVE to actually FIGHT for peace.

And when that time comes…and I’m looking over my shoulder at the guy next to me…and I realize it’s Jared Wesley…I’ll be extremely proud to be there with him in battle. I believe all of us born with the gift of a voice were born to USE it; and some of us are born leaders, like Wesley…and we can’t shy away from what is actually a deeper responsibility to our entire planet with the talents we possess. The future is going to need people like Jared Wesley…but we need him just as much right now as we will then.

Flat-out one of the most thought-provoking and enjoyable listens I’ve had in my entire life. I know I’m just reviewing a single here, and I thank you for sticking with this entire rant when I’m supposed to be talking about one song…this proves once again that music can be so much more important than simple rhymes and beats, guitars or drums. This is a song that needed to be made, and one we all need to hear.