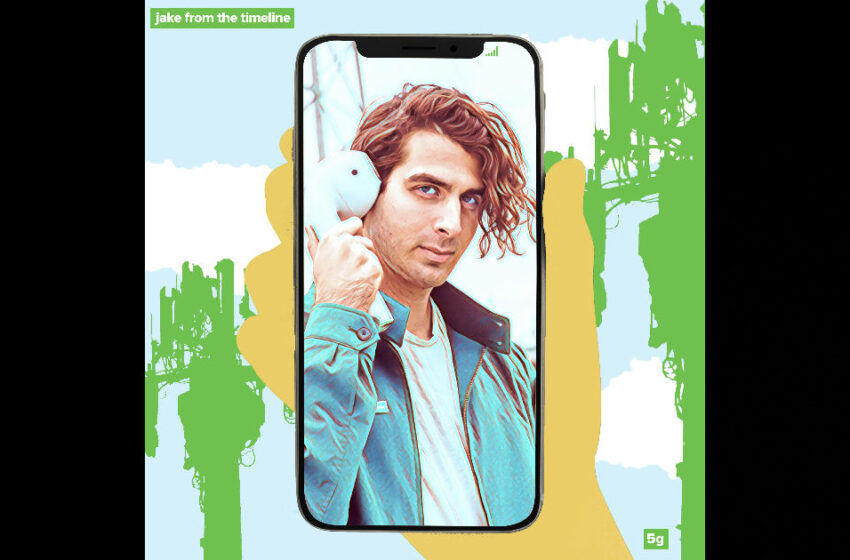 Interesting dude.  I’ve been reading all about jake from the timeline, and from what I gather, this guy’s had several significant bursts of online success with viral videos & whatnot.  Chances are there’s a bunch of you that might even know the man from what you’ve been scrolling through…he used to post on a thing called Mashable doin’ comedy as a director/performer with titles you might recognize like “saved drake’s life” and “world’s youngest boy band.”  I say YOU might recognize’em…because any regular reader here knows I wouldn’t have the slightest clue what a Mashable even is – I’m still at the ‘what’s an Instagram’ phase of social media…so yep, you bet – even though IG is jake’s thing, I watched this video on good ol’ crusty YouTube.  I know things about music – that is it, that is all, that is the end of my reach.  Anyhow…you get the point – jake from the timeline knows his way around the internet and how to use it to his advantage, which will certainly play to his benefit as he crosses over into the music realm – you’ll see from the video supporting his new single “5G,” that he’s got his whole vertical style of filming goin’ on…which I’ll admit, in itself, stands out as different right away.  I’m all for going the routes less traveled…so heck ya…I was interested just by the look alone to begin with…then you factor in the title of “5G” & realize that’d be a perfect fit with a phone-style video too…and it’s a pretty easy click from there.  I know all this stuff got my curiosity goin’ – coming from comedy & all…would we be able to still take some of this seriously?  What was something like this gonna sound like?  What if someone calls jake right in the middle of this video & it’s like, super important and he really, really has to take it?  I’m a fan of music that has me thinking about so many questions – and I know to get the answers by pushing play.

If there’s something about this that ain’t genius, then I’m missin’ it – all I see, and hear, is pure gold.  Not only has jake from the timeline upgraded himself to “5G” here – he’s quite likely a full G or two beyond the rest of us even still.  For real y’all – this is one seriously clever dude – and fearless at that – he grows hairs in weird places just like I do…and once you see the video for yourself, you’ll see he’s…well he’s…uh – let’s just say he’s not exactly afraid to put himself out there, know what I mean?  All that being said, the man is bizarrely charming…and I suspect he rightly knows that by now – to me, it’s one of his biggest assets and he uses that charm of his tremendously well throughout the video you’ll see.  He gets you laughing quickly by having this massive AirPod by the side of his face – but pay attention y’all – you’ll likely find that the content itself runs much deeper than you might expect it would in reading about jake and/or knowing his comedic credentials.  Essentially, the laughs will likely come more from the video, while the song itself…sure, maybe a chuckle here and there – but jake from the timeline proves his ideas are much more strong and durable than a mere punch-line could ever be when repeated.  So the answer to my first question checks out – yes, you can in fact take jake seriously…or at least as seriously as you want to anyhow…he kinda leaves that up to you – you’ve got your options between the audio and video.

As far as the second question I had goes…he sounds freakin’ great actually.  It’s a melodic Indie-Pop style of sound he’s workin’ with, and again, it suits his natural charm.  It’s a very subtle & minimalist vibe he’s got goin’ on…and admittedly, he’s in a gear that’s not necessarily challenging him too much range-wise when it comes to the vocals…but whatever!  I mean, c’mon – there’s something to be said for knowing your sound, what your voice is capable of, and where it truly fits – all of which jake seems to fully understand.  The dude sounds great as far as my ears are concerned, the lyricism is stellar, and the layers of detail in this track that eventually come into play on “5G” certainly do not go unnoticed or unappreciated over here, that I can tell ya.  Not too far removed from the cleverness you’d expect outta Bo Burnham…which is keeping just about the best company I can personally think of, so that’s aces too.  I felt like jake from the timeline slid right into a mellow vibe that he nailed flawlessly – and the fireworks of the melodic burst in the music when it does ramp up in the finale brought out even bigger & bolder vocals outta the main star of the show as it went on.  Video-wise, that bright neon vibe that surges through the music coincides brilliantly with a green-suited jake running through the city streets, which is then color-screened out so that effects can be applied to his outline instead…it’s the kind of wildly dynamic trippin’ visuals we all love to get down on and watch, just admit it.  But yeah…even on a structural level…jake’s melody, flow, and mood is right on the money here – it might have very well started out as a somewhat comedic idea, but “5G” has legitimately morphed into a song well worth listening to, supported by visuals that are freakin’ fantastic.

No calls were taken during the making of this video.  Someone get this man a second AirPod so he can hear his new single in stereo though eh?  “5G” has it goin’ on from sight to sound – it’s more than a pleasant surprise, it’s a genuinely addictive tune; part of that is clever melody, part of that is natural charm – but in the end, it’s a recipe that stacks up to a tasty treat of Pop-based confection for your ears, that also gives your brain something to chew on at the same time in considering just how deep this connection that runs between us all, really is.  I dig you jake from the timeline – “5G” is a rad song, and video, 100%.

Find out more about jake from the timeline at his official website at:  https://www.fromthetimeline.com