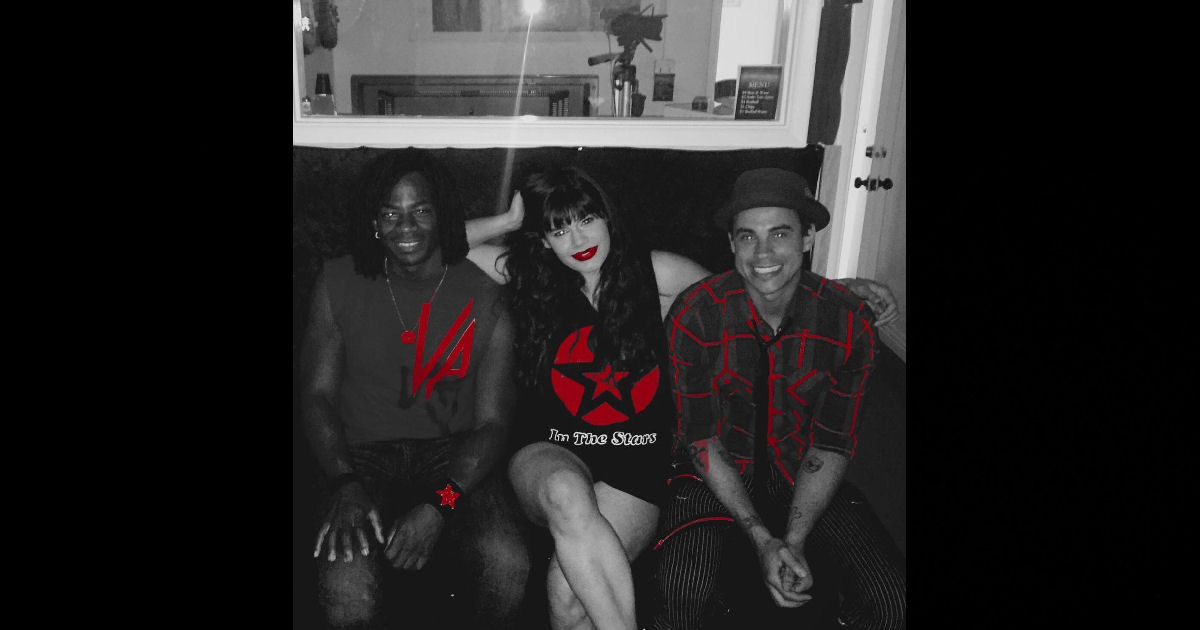 In The Stars – Singles Review

From the handful of singles I’ve got here from LA-based band In The Stars, it’s clear that bringing the rock right to the people is priority number-one.  I’ve got love for that.  I’ve had a scan of what I can find out about them online, social-media pages & whatnot…I noticed they’ve got a list of influences where the real-life bands/artists that are found on it would likely get into a fist fight with each other over what music really is/isn’t all about…and as I’ve experienced many times in the past, a diverse list like that can actually indicate a bit of a scattered sound.  In The Stars knows that they want to Rock – as to how exactly they want to Rock…that might become a whole other story over time; or maybe that’s already the case.  After a lengthy scan through this interactive band’s page at Facebook, you’ll find posts dating all the way back to 2010…different lineup in the band originally than what you’ll see in the picture up top…couple more members back when they first started out.  Sometimes that can cause a more widespread range of focus & sound as well, as they soldier on forward, rebuild, refine, and reshape the band – and then sometimes there’s really no other explanation at all needed other than all-things-Rock are what tie these songs they create together & nothing more.  These four tunes in review have four different personalities and characteristics driving them…which makes for a great sample of what In The Stars are all about, even though it also makes it tougher to pin down exactly how to define them.

Because the sound & approach is so varied here, there’s a good chance you’ll be in the same boat as I was and respond to some more than others…that’s only natural.  On a list laid out in alphabetical order, I started with a killer track called “Desperados” which definitely hit the mark and got me excited about what I might hear from In The Stars.  The way it opens is actually quite reminiscent of the enormity of a Jane’s Addiction track…and I think you can hear that influence here in the writing somewhat…if not so much in the chorus, likely the verse.  The chorus shifts towards more of the sing-along-crowd-chant type-deal…for which…I mean…I get it…again, a quick scan on their social media will reveal that this band is playing a ton of live shows – so you want to essentially write those big moments into the music like that.  Or vice versa…taking that from the stage and trying to recreate that all-encompassing magic of the moment in the studio, which is tougher for sure – but I felt like they really pulled it off well on “Desperados.”  I dig that you can feel those guitars shift from the lefts to the rights as “Desperados” kicks-in; the brightness of the vocals suit this cut more than some of the others by comparison and genuinely help add to the intensity & wildness in the vibe created here.  Solid punch to the beat and metering of the flow in the vocals, meaty transition into the pre-chorus, great backing vocals in the chorus itself…smart harmonies…definitely a decent first impression.  Quite an ambitious Rock song at the end of the day…In The Stars are undoubtedly straddling a fine-fine line between big-ROCK and alt-Rock…I think they keep the alt-edge sharp enough to be the dominant factor here despite the efforts of the chorus to pull this tune into more straight-ahead terrain.  Great energy though…I can definitely get behind this and felt like “Desperados” definitely came out as one of the stronger tunes in this set of four.

“Don’t Say Goodnight” is probably the idea/style closest to my own personal preference.  Kind of a Foo Fighters-meets-Feeder style of bright Alt-Pop/Rock that leans heavy on melody…that’s more than fine with me – makes for an uplifting energy in the intensity of this cut.  The additional keyboards/piano in the background provides a ton of essential strengths in this vibe, the drums are on-point, bass is locked-in, guitars are relentlessly crunchy, and the vocals are supplying the majority of the melody – it all adds up.  Verse-wise…I feel like “Don’t Say Goodnight” sits right where it should be…pre-choruses reveal this band puts the work into their transitions, writing, and overall approach while providing some highlight moments as well.  Chorus-wise…the idea is great, lyrics fit perfectly…and…it like…needs salt or something.  Not quite sure what it is there…I think with the vocals being maxxed-out at the top of their register for the entire length of the chorus and trying to keep up with the brightness of the melody might take away a bit from the potential dynamics that this cut could have.  Right from the drop though, I feel like “Don’t Say Goodnight” certainly sounds like a single in motion…and ultimately, while I think there might still be a tweak that could be made to expand on the ideas they’ve got here, I still think this came out strong enough to satisfy listeners in the single-worthy song this continually remains to be.

I have my moments with the vocals overall in this band…sometimes I think they could be dirtied-up a bit to help further match the vibe…whether that’s through effects or adding additional edge through the backup vocals, I’m not quite sure…but you’ve got undeniable contrast that continually exists within In The Stars through the low-end crunch of their rhythms and the relentlessly brighter vocals over top.  That’s gonna work for some, not for others, and like every band out there in the world, that’s just something they’ll have to come to learn to accept.  You can hear on a track like “Hot Cars Fast Chicks” that there’s an attempt at this somewhat…there’s moments with reverb-laden vocals, but that only ends up adding atmosphere and sinking the vocals slightly more into the mix than it does anything to change the sound or adapt it to the vibe they’re working with.  I tend to look at it like this…a guitarist ain’t gonna just add in a twinkly acoustic part into an intense Rock song…or at the very least, it’s a heck of a lot more rare.  Kind of works the same with vocals at the end of the day…the voice is every bit as much of an instrument as anything else; the ideas that In The Stars work with for the most part are pretty damn strong, but it feels like there’s still a bit more work to be done to bring the complete vision together.  Just depends on what the goals are…if it’s to go out there and Rock like there’s no tomorrow, I’ve got no beef whatsoever and I’d say rock-on to every member of the band with no hesitation; if they’re looking to develop and evolve, I’d say there’s likely still some work to be done to tighten the corners.  I probably have less to complain about on “Hot Cars Fast Chicks” than some of the others by comparison on a technical-level and how it’s put together…but idea-wise, I’m probably much more indifferent here than I was about the rest of the set.  I wouldn’t turn it off…I’d likely still turn it up.  Would I seek it out?  Not as sure; “Hot Cars Fast Chicks” is a good time without question…but like all good times, you can foresee the end to it and I can imagine burning out on this one pretty quickly.  It’s about as celebratory of the Rock genre as you’ll find in a song…perhaps with the exception of “Viper Room 2016” to follow; but where I struggle with ideas that are more straightforward like these final two singles, others will fully love them.

I ain’t exactly concerned about In The Stars finding an audience though – nor should they be.  Their style of party-rock is pretty damn universal when it comes right down to it…it would be impossible to stand in a room with this band live and not end up feeling the vibe of ANY of these tunes – let’s just be clear about that.  No matter what your preference or personal-taste may be – when a band is as into it all as In The Stars clearly is, that infectious & enthusiastic atmosphere can take a room right over and blow through any resistance with the pure fun they create as a result.  So believe me…there’s plenty of people out there that’ll love “Viper Room 2016” – which is really the party-vibe cranked to eleven.  Is it over the top that way?  Sure.  Absolutely.  Is it meant to be?  I can’t see how it wouldn’t be.  In The Stars have made it perfectly clear throughout these tunes that the goal is to rock at all times – when the opportunity exists to rock even more, they’ll take it – and here we are with “Viper Room 2016.”  There’s no doubt that they shift towards more of a Punked-up Rock energy here…somewhere in the middle of The Ramones and Kiss…it’s all amped-up party-vibes on this final tune.  Adding in a splash of Reggae for a moment just past the middle of this tune was a great idea…I can imagine that being a highlight spot in the live set before they fire up the hooks to head towards the finale – plus I felt like it gave what might have become a more typical Rock-anthem a bit more personality that could come in handy when pulling people in from outside of the genre or on the fringe.  Definitely the kind of energy and sing-along moment that will grip and hang onto a crowd…I’d never deny the fact that a track like “Viper Room 2016” is pretty much guaranteed to crank-up the good times wherever you’d see this song played live.

For myself personally, it’s a pretty even split.  I really dig what I’m hearing on the first two singles “Desperados” and “Don’t Say Goodnight” – and I’m more tossed up over “Hot Cars Fast Chicks” and “Viper Room 2016.”  What I do really like is that you can hear in every moment of their material just how into it In The Stars truly are…and that counts for a ton for us as listeners…it all becomes that much more enjoyable because you can seriously hear just how much the band is enjoying their time in the spotlight…and I’ve got all the love in the world for commitment and passion like that.

Find out more about In The Stars from their official page at Facebook:  https://www.facebook.com/InTheStarsBand

Tags: In The Stars Singles sleepingbagstudios