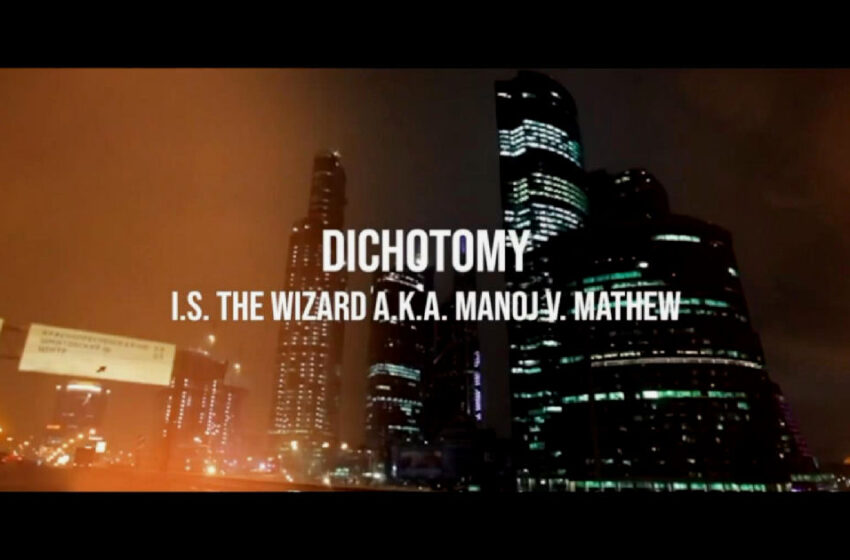 i.S. the WizARd you say!  Now that’s a moniker you won’t forget right there is what that is y’all.

“Sometimes it’s grimy, sometimes life’s gritty” – as the man will tell ya himself, and he’s got a track here that reflects that, using contrasting textures between the music and the microphone to make points like that quote from “Dichotomy” crystal clear.  He’s upfront about seeking the opportunity to communicate and share different perspectives – you can hear that right there in the lyrics of “Dichotomy” – and when you consider that, I think it’s only natural that “things aren’t always as they appear.”  Y’all know I ain’t gonna lie to ya – i.S. the WizARd has got an interesting mix on this cut that’s gonna be challenging for a whole lotta folks out there – but when you consider his words, you gotta admire how it all makes sense.

What i.S. the WizARd, a.k.a. Manoj V. Mathew really has working in his favor here is the core strength of the music itself – that’s about as addictive as it gets, and the clarity is straight-up stunning, 100%.  The man’s also got the right energy, stellar tone & melody, and solid bars that prove he can capably hold his own with the resounding conviction & passion you’ll find in the way he spits his words.  All that stuff checks out for sure – he’s taking chances & risks with the mix on the vocals and the way that layers in with the spectacular clarity of the music for sure, but I’d be more than willing to bet it’s intentional – which adds an extra degree of art to a track like “Dichotomy” that gets us paying even more attention in its own unique way.  I’ve poked into a few of the singles & videos that i.S. the WizARd has dropped online to this point…cuts like “Calm In The Chaos,” “Rivers,” and “Mission Statement” along the way – and you’ll find the vocal vibes he’s rockin’ with are a signature part of the man’s sound overall.  It’s risky – but there’s always inherent risk in blazing your own trail or finding the uniqueness it takes to break through…you gotta respect where i.S. is comin’ from, to fully understand where he’s goin’ with it, you feel me?  With a set of rapid-fire imagery onscreen for the visuals to support “Dichotomy” – the video blazes by while the beat thumps out supreme sound and i.S. the WizARd rocks the mic with a mix of verbal positivity & thought-provoking words that fully inspire, verifiably proving the man’s got game.

Listen to more music by i.S. the WizARd at Soundcloud here:  https://soundcloud.com/isthewizard