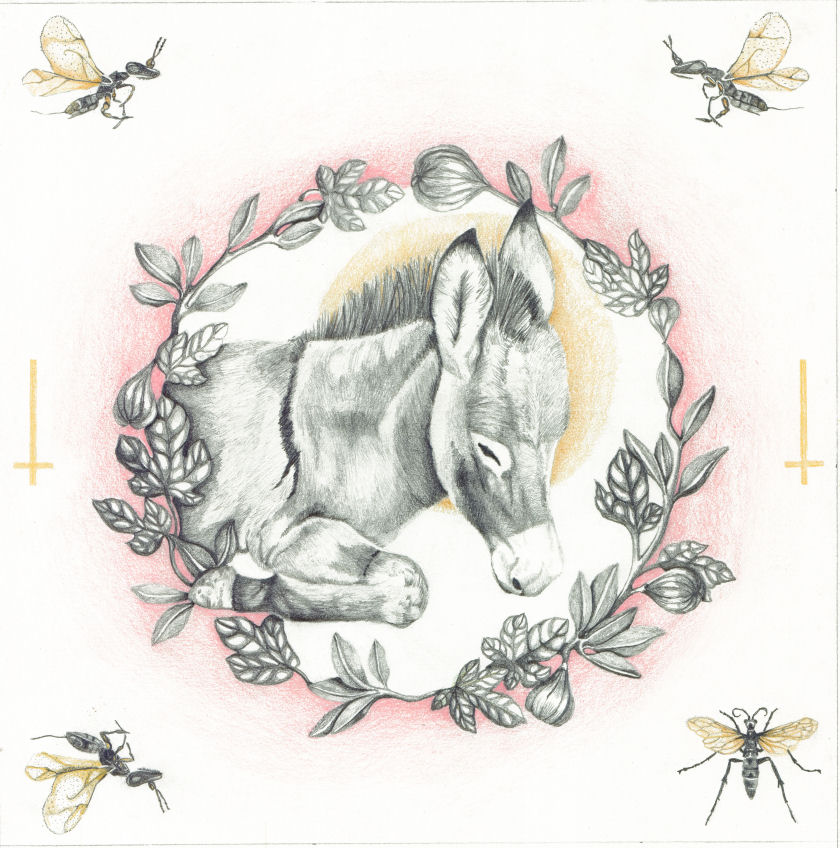 I think it was pretty close to a year ago at this time when I first landed my ears upon Human Behavior when reviewing their album Golgotha. After the unique experience diving deep into their diverse & versatile music, this Tucson, AZ based band has managed to stick in my mind as a sound that will ALWAYS be worth checking out. Today we see if my instincts are correct or if my ears misled me as we review their latest album Bethphage with high expectations based on their record of previous audio-excellence and ability to take music into bizarre & completely engaging atmospheres.

Of course, they are separate experiences…but you’re always hoping for the magic that made you fall in love with the sound of a band to be there again for you somehow, even as they evolve into new territories and textures over the course of their evolution.

I’d like to proudly say that Human Behavior has put forth some new extremely bizarre tunes, continuing to lead the way in alt/experimental/folk music with genuine artistic merit. Bethphage, an all-encompassing experience that grasps hold of Catholic guilt, drug addiction, OCD symptoms, and right up to & including songs about ethnic identity confusion; just your typical average, everyday band from AZ right?

Probably not. In fact I’m sure that’s not the case or I might have already considered moving there. If all the bands and artists down there pursued the true art of sound & recording and the passion of the craft like Human Behavior does, I would move there in a heartbeat. But that’s not the case…and that’s part of what makes this sound as special as it is, existing isolated in an area where this sound would not be typical by any means. But in fairness to AZ – not many places would be able to identify Human Behavior’s sound as the defining characteristics of their music-scene. It’s a large part of what makes this music as genuine as it is…it’s like a rare uncovered gem…but with music already released and in the past and a growing reputation, it’s clear the people are also catching onto their unique vibe.

Laid out in chapters throughout the album, I think the only thing that truly surprised me upon sight alone was that it was laid out chronologically! Audibly, plenty was surprising…but quality wasn’t one of them – that was expected…and delivered in full on Bethphage.

First of all, “Chapter 1” starts out quickly building into an indie-pop fury, complete with chorus-like vocals and a frantic but controlled sound from the lead vocals similar to what might remind you from Grandaddy. Musically, it ranges from a Lou Reed type atmosphere, met with Pink Floyd…absolutely exceptional vocals from the female section as it transforms into a nearly four-minute wander to the end. Normally…this is the kind of song that I would expect to find at the end of an album…it’s epic in scale at a second shy of ten minutes long. That’s one hell of an opener…but everything from instrumentation to production makes this track completely engaging as it transcends into its hypnotic rhythm.

But what’s the angle? What game are you playing here Human Behavior? This eight-piece band pulses along perfectly, droning to the end of “Chapter 1” for the music to subside from its hazy grip into a scattered ending that breaks way into the crystal clarity of “Chapter 2.” Representing the title of the album and overall meanings behind the words – they start this song with a gospel-like choir of voices that sing beautifully, confidently & clear against a simple guitar line. Both perfect & imperfect at times, the chorus delivers an incredibly real and bold sound that really takes hold. It breaks way to inventive spoken word…and you know me, I love this stuff. Dude literally sounds like the lead vocalist from King Missile here…love it; and swinging into melody at the end, “Chapter 2” ends on a beautiful note.

But here’s what I LOVE – I love “Chapter 3.” Like I’m sorry guys, I know I try to not play total favorites, but I just can’t get enough of this evil little recording. With the world’s most haunting opening tones and feel…”Chapter 3” plays like a haunted house you’ve found yourself in without invitation. Musically, the production and clarity on the sparse instruments, atmosphere and space are graphically masterful…and as the opening shouts of a simple “Hey” hit you in full-stereo, they bring out the real menacing and disturbed tone of this track. With an excellent static-infused sample of a recorded conversation taking this song to the end; this is literally a highlight for atmospheric-excellence, no doubt about it. It’s devastatingly hollow, desperate and cold as all hell; what a masterpiece!

And what a transition! As it heads smoothly into a bright and beautiful banjo-driven melody on “Chapter 4,” you get the thought-provoking lyricism and melody that Human Behavior is capable of switching into at any given moment. For an eight-piece band, they can sound so incredibly small at times, at others they spring to full bloom as the chorus of backing vocals rise to the occasion. “Chapter 4” is a perfect example of the sound we know and love from Golgotha, more refined and experienced, tightened-up but still retaining their penchant for reckless abandon.

Really though…production is a standout star on Bethphage almost as much as the performances themselves. Incredible sounds and clarity are examined in the melancholy melody of “Chapter 5,” an acoustically driven track that’s as spare as it gets…but so damn necessary. I absolutely love this song; it literally sounds like reflection…thought…consideration. Creeping slowly into new acoustic melodies in “Chapter 6,” you can also appreciate the intelligent layout of the album as it flows as well as the slight variations in the background noise that make this entire experience feel as if it’s one massive song. That’s called cohesion baby! And Human Behavior have pulled that off completely as Bethphage plays along from front to back.

Part of what helps, is that within any given track they can also sporadically jump into clever new ideas and twists that make some of these longer songs feel like individual tracks combined in slick ways…almost like there’s 12 songs on the album instead of 8. As “Chapter 6” springs into a whole new life almost halfway through…there are excellent drums, acoustic, flute, & violin to be had…and a whole level of intensity as they pound this out towards the end through the instrumental middle. With outstanding backing vocals carrying this track to the final moments, they carry on into the minimal and far away sounds of “Chapter 7.” This song isn’t recorded any lower than the rest…this is a smart recording that subtly floats in the background before giving away to a completely intense rise of their voices among a quick spoken-word ending.

“Chapter 8” ends the album with a seven-plus minute song that borrows influence from all over our world’s geography. Excellent versatility and true diversity displayed throughout the music here, smart switches and well-written parts all tightly packed into their controlled-chaos. Can’t stress enough just how well this new album is recorded…it’s an absolute highlight for atmosphere for this year. Each of these songs play so well into the next and each one has taken you firmly in its grip to the track to follow. “Chapter 8” puts an inventive spin on a pop-rock melody, traversing through indie/alt-folk territory and an underlying worldly-sound that dominates the background of this melody. It’s like the folk-version of Jane’s Addiction when they were making Ritual De Lo Habitual…or something like that.

Regardless of what comparisons or conclusions you come to about who they sound like – WHAT they sound like is incredible. And as the bass, drums and vocals raise up to bring the ending of “Chapter 8” to a close…you realize that making a song come out ‘straight-ahead’ could be such an easy route for this band to go as the melody, rhythm & hooks creep further into the music towards the end.

Thankfully, Human Behavior is an eight-piece collective that truly makes art every bit as much as they make music; and here on Bethphage displays every reason why this band is leading the way with creative & ingenious sounds, lyrics and music that captivate every inch of the mind.