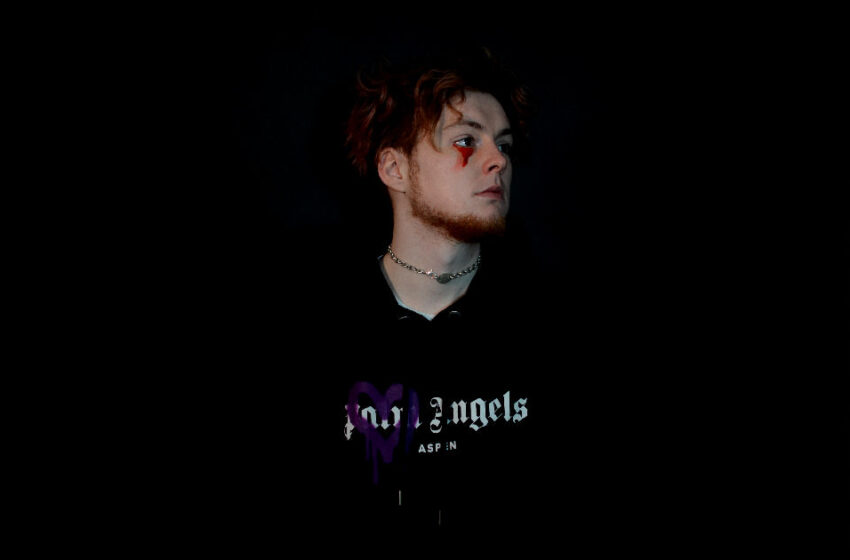 Don’t get it twisted…I’m not sayin’ that I don’t like what I’m hearing, I’m just sayin’ a comparison to one of music’s greatest composers this early on into Hoodie Rob Uzumaki’s career might be…hmm…a bit of a stretch?  We’re what…three years…nearly four into Hoodie’s life as a professionally recognized artist?  Our man Mozart is workin’ on something like three, nearly four centuries?  But you’ve got time on your side Hoodie – like I said, I dig what I hear on “Teardrops (2010),” and maybe you’ve got centuries in your future ahead.

So here’s what I think works and here are my concerns…and they’re both basically the exact same thing.  On the one hand, you’ve got Hoodie Rob flexin’ an extremely relevant sound for the right here and now of what’s happening out there in the music scene – like, there’s zero doubt whatsoever that this guy’s set up with a vibe designed to slide straight onto playlists & up to the top spots on it, worldwide.  I get that – I can hear that.  I might be closer to Mozart’s age at this point in my life than I am to young Uzumaki here, but I keep my ear to the ground and I know what’s jammin’ on the radio dials out there.  But that’s just the thing…it’s also what’s working against him – “Teardrops (2010)” pumps out such a comparable sound/lyrical themes that he’s gonna have to swim harder to fight against drowning in the sea of sameness.  Two things can often be true when we’re putting out music into the world, maybe even more sometimes…but that’s where I’m at – relevant Emo/Rap sound for sure, but perhaps way too similar to the rest of what’s goin’ on out there right now to stand out as uniquely as he potentially could be.  The best way I can put it is to say that Hoodie already stands out to me more for the mission he’s on and the personal story behind his music than he does with the results of a single like “Teardrops (2010).”

Would I turn this UP?  Hellz YES I would!  Don’t get me wrong…I’m not knocking the sound, I’m not takin’ shots against the man making it either.  Will it hold up over time?  Will I remember this cut in about six months from now?  I have bigger questions surrounding all that…and only time is going to tell for sure at the end of the day.  Keep in mind, in about six months, I’ll be lucky if I can still remember where I live or where it is I put my keys, phone, or wallet…I’m not claiming I’m the brightest of the bunch, and every day the memory on this machine in my dome sputters more and more running on the few fumes it has left.  So that’s on me Hoodie…I’d be the first to tell ya that my own memory is fading like daylight does.

That being said – I’ll leave the rest up to YOU to consider there friend-o…maybe there’s something to be gained from being as objective as possible here – what would you say makes “Teardrops (2010)” all that much of a unique cut from the rest of what’s out there in the music-scene right now?  I’ve seen Hoodie’s rapidly growing catalog online & just how much music he’s put out over these past three-four years – his production, work-ethic & drive is all seriously INSPIRING…but quantity can be a savagely consuming thing, and part of me legitimately wonders if Hoodie himself will remember “Teardrops (2010)” at this time next year.  In short – I think there’s more to his story & my advice to the man is to not sell himself short – you follow me?  Because all the right pieces are in place when I listen to him…he’s got the sound, he’s got the style, he’s got the production & performance all dialed right into where it should be – but I felt like he’s slightly missing that stand-out element that is going to have us remembering it’s HIS song – that make sense?  That’s what that whole sea of sameness is all about – and it can claim your whole soul quicker than Hoodie Rob Uzumaki can make that next track if you’re not too careful about avoiding it yo.  It’s one thing to fit in, be relevant & have a sound that people are going to love – but it’s a whole other story when it comes to what it takes to be setting the trends as opposed to following’em…I guess that’s what I’m saying.  I’m not saying that Hoodie doesn’t have everything it would take to accomplish that, if that’s what he WANTS to do…he’s certainly got the skills to achieve that – but it’s also entirely up to him to make that happen.  To rebel just enough against what’s tried, tested, and true, in order to be that game-changer and leave his own stamp on the scene permanently…you know…like his main man Wolfgang did way back in the day…ain’t that what it’s really all about?

I’ve said it many times on these pages of ours here – it all depends on what the goals are, and that’s always an extremely individual thing.  To be rocking a song like “Teardrops (2010)” and have it all come out as seamlessly & flawlessly as it sounds…to have hooks this vibrant, catchy & designed to be turned UP – especially when doing everything you hear straight from the ground up all DIY style – is no small accomplishment whatsoever, and Hoodie deserves a serious shout-out for what he’s achieved in that regard without question.  All I’m saying…all I’m advocating for…is for the man to tap in to what it is that can separate him from the rest of what’s out there, while still having enough of a relevant sound that people will tune into what he’s creating without being able to tune him out either – that make sense?

Like I was telling you from the drop of this review…he’s got a long way to go to get to that Mozart status this early on into his professional career – but with the skills that he’s got and everything that he’s clearly capable of achieving…I’ve got all the confidence in the world that an artist like Hoodie Rob Uzumaki has what it takes to reach that level of success he’s seeking out, however he chooses to personally define it.

Find out more about Hoodie Rob Uzumaki at Instagram:  https://www.instagram.com/hoodie_rob