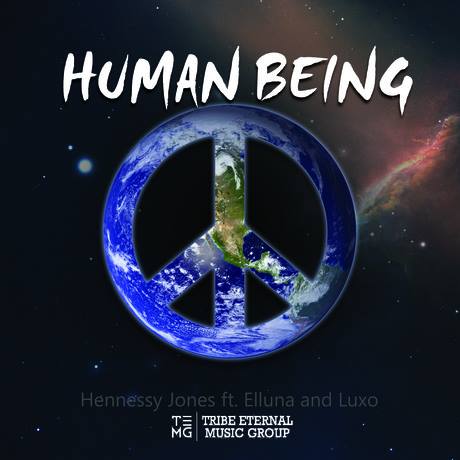 Couple new singles in review today from Hennessy Jones…”Concepts” which was released about four-months back and “Human Being” which is still right out of the wrapper and not even a month old yet.  Both tracks feature collaborative efforts and the talents of Elluna alongside Kirsin assisting on “Concepts” and Luxo on “Human Being.”  With the two releases set wide enough apart…I wasn’t expecting them to necessarily sound like they belonged together in checking them out…but it was actually kind of surprising to hear just how different the two singles were from each other.  Hennessy Jones clearly makes tunes with a defined vision, ambition and overall atmosphere as a result…and I think he’s done well to showcase & highlight to very different vibes in the music he makes.

“Concepts” is written in a much more minimalist style by comparison to “Human Being.”  Nothing wrong with that…it’s arguably a less-accessible style of music for a lot of people out there still – but it IS still hot on the menu right NOW; there are tons of people into ideas like this currently being explored in electro R&B and Hip-Hop music and loading up playlists with sparse-beats compared to only just a couple years ago.  So “Concepts” definitely fits the current timeline with its spread-out sound and massive low-end rumbling when the music seeks to make presence – but the rest of the impact is left mainly up to the vocals to carry the weight.  It’s mixed extremely well for the amount of low-end this track applies…it contrasts well with the brightness in the singing…the rapped verses are engaging enough…if anything “Concepts” could be accused of being TOO chilled out, know what I mean?  Sometimes you’re in the mood for a slow jam, sometimes you’re not kinda thing…”Concepts” seems like the kind of cut that has a real time and place where it’ll fit on playlists out there – but not necessarily a tune for your every day.  I think the female-led vocals sound spectacular in their style and tone…and in the infinite atmosphere of “Concepts” they serve as that beam of light to guide it home.

Conversely of course, “Human Being” sounds enormous by comparison to the minimal approach he took to “Concepts.”  I mean…there’s just absolutely nothing about this track that doesn’t stand-out tremendously…this is an intense & passionate composition that has all the audible qualities of what a single needs to have in order to be successful.  Full-marks to the rhythm & flow of the vocals…it took about halfway through the verse for Hennessy to ditch lines that have been written several times before by those that carved the path he follows today – but it takes next to no time at all for him to get right into the personal, right into comments and perspective on society, right into the REAL.  You can hear the importance of the words and the conviction in his voice on each bar as it comes out throughout the first verse…and as a result what we hear becomes seriously powerful.  There’s a more laid-back approach to the second verse…but what might have been traded in energy is made up for in style…everything sounds fantastic.  I’d assume that’s Elluna that’s making another fantastic turn on the microphone singing the hook here…certainly no complaints there, she’s been flawless in both songs.  More importantly than anything else of course…is the ‘what’ of what’s being said here…and the message in “Human Being” is certainly one that the world can stand to turn up and really listen to right now.  Promoting unity, togetherness and embracing a leadership role in music in the sense that Hennessy isn’t just sitting back…but rather standing up for those that can’t and really speaking his mind here on “Human Being.”  It’s powerfully produced and tightly performed…everything from the idea to the execution works extremely strongly on this second single I checked out…”Human Being” is a serious hit.

And like all singles…certainly something we’ve been discussing here on the pages and in the SBS Podcast lately…they can lead you to some stellar results when it comes time to make the album.  I’ll put it to you this way…I could write all the words under the sun and it would make next to no difference here when it comes to these two singles.  Hennessy KNOWS just from hearing these two tracks and how they came out what the end result of how he wants his music to sound is going to be…it’s not wrong to enjoy everything we create – but when it comes to being guided along to what we’ll do in the future…listening to our own music as objectively as possible becomes an important skill on the road to success.  I have no doubt in my mind that Hennessy hears what I do…I like both tunes, I’m assuming just like he does himself – but is there a difference in the amount of strength that each track would connect to a listener with?  I’d have to say absolutely, yes…and he’s being honest – I’m sure he’d agree.  “Concepts” was a good cut to start out the experience, “Human Being” ended that experience with the real impact needed to be established in a first sample from an artist in order to get us to return.

Find out more from the official page at Facebook here:  www.facebook.com/tribeeternal