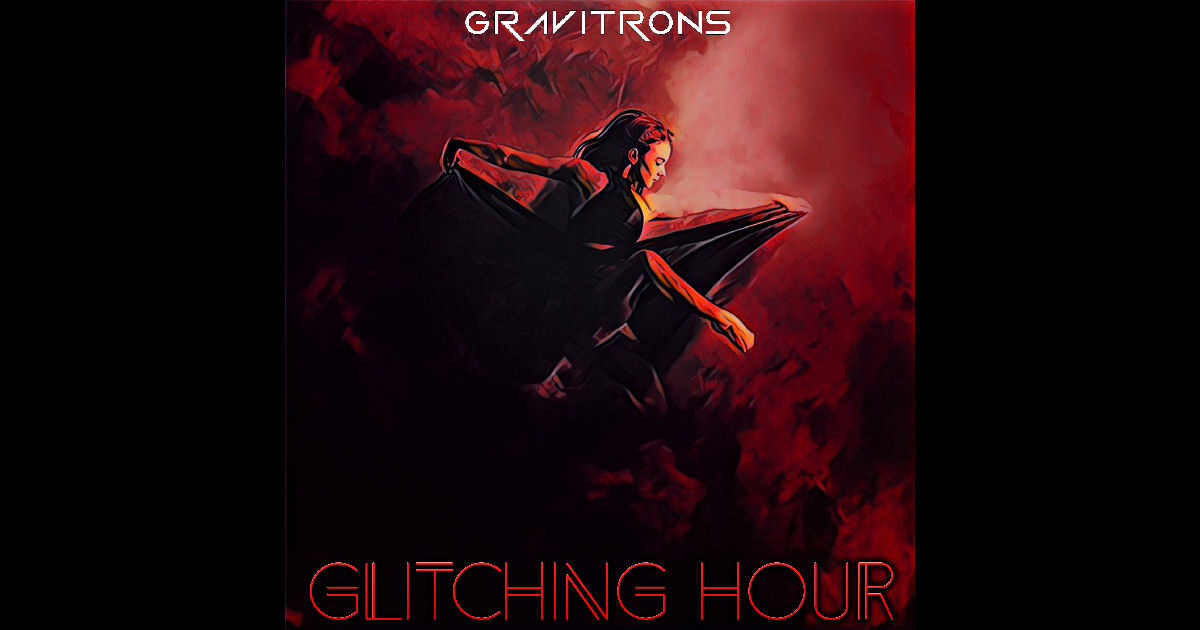 Sometimes there’s not a whole lot more to be said other than ‘job well done’ when it comes to any advice I could give an artist or band out there…that’s the reality.  As much as personal preference can come into play, it’s still a separate entity from what’s happening in the actual music itself – that’s the opinion aspect of reviews you’ll read out there in magazines & online hotspots.  But if you’re examining music from an objective level and listening for what does/doesn’t work without bias, the truth is, when things come together as they should, sometimes there’s not much more than can be supplied beyond confirmation that an artist, band, or project is on the right path – which is the case with Gravitrons.

Because there’s sure not much if anything at all I’d go about changing on this new single “Glitching Hour” – this cut comes at you with full force and a seriously edgy groove that’s as eerie, creepy, and haunting as it is straight-up built to entertain ya.  The bulk of the main electro-riff and hook you hear is freakin’ fantastic; hearing it show up for the first time is amazing to begin with, but hearing Gravitrons take it away and bring it back has it making even more of an impact on ya the next time it shows up.  Long story short though – if you want wall-to-wall intensity in your EDM – Gravitrons is willing to supply.

What could be done to make it better?  Like I mentioned at the beginning, we’d be heading into personal preferences & nothing more – as far as the recording, writing, idea, structure, and results of what you’ll hear on “Glitching Hour,” you’re simply not going to find any faults where there aren’t any to be found.  That being said – what are the conceivable points of contention for the people out there?  Well…that same main hook that I find absolutely electrifying, gripping, and essential to this single, could very well be massively grating for others due to both its frequencies and intensity – that’s a possibility.  Keep in mind, I happily listen to “Ventolin” by Aphex Twin on the regular and have never once played like the other children in the sandbox did growing up…I’m a bit strange in that sense; “Glitching Hour” is also a bit strange in that same sense…and quite likely, that’s a lot of why this appeals to me personally.  I love sounds that challenge my ears – creative vibes like “Glitching Hour” are extraordinary to dig right into and really let that intensity invade your space…it’s the kind of cut that amps-up the energy for me, but one that I could very well imagine might even induce the anxiety in others…it’s not for those capable of sitting still, let’s put it that way.  As far as the in-house advertisements for who & what we’re listening to on the inside of the song…here’s where I’m at with that – I don’t mind it for this singular experience.  What I do understand however, is that this is often what quickly becomes a signature move on the inside of the Electro-music genres as well though – and it’s not one I’ve ever considered to be necessary, or something that serves the actual song itself.  Might serve the artist, sure…it gets a bit more name-recognition established – but it can also take listeners outside of the EDM genre that would expect that, right outta the moment potentially.  It’s a fine-line to walk that I just don’t recommend walkin’ at all really; like I said, I don’t mind it here on “Glitching Hour” – it’s not taking away from the experience, but again, if I’m being truthful it’s not adding anything for me either.  I’ve never once spun “Glitching Hour” and said to myself, “Ohhhh I can’t WAIT for that moment where it announces the artist and the song title!” – and I can’t imagine I ever will, be it Gravitrons or anyone else out there that wants to slip one of these into the mix.  That being said, if it works for DJ Khaled to introduce yourself each and every song & leave that signature stamp down on the music…I mean, it’s kinda hard to argue all the success he’s had.

“Glitching Hour” builds brilliantly right from the get go, and before you’re even thirty-seconds in, detonates – and seconds after, you’re already on what feels like a serious ride you can no longer even remotely control, nor would you want to if the soundtrack to it’s gonna be like this.  The arpeggio low-end rhythm is massively effective, the beat is killer, the haunting & metallic sounds drifting through the atmosphere are wicked to experience as well…but I’ll be damned if it sure doesn’t come down to the extreme appeal of the main hook when we’re talking about this single – Gravitrons CRUSHES when it comes to the real meat of what pulls you in to listen to this single, there’s simply no doubt about it.  “Glitching Hour” might not be for the faint of heart…it might come with the same warnings you’d get when taking a ride on a rollercoaster advising your safety – but if you can hang with the intensity that this track relentlessly pumps out of your speakers and its extraordinary adventurous extremities of sound, I can guarantee you’ll get right back in line to queue it up & take this ride all over again, 100%.

Find more music by Gravitrons at the official page at Bandcamp here:  http://www.gravitrons.bandcamp.com