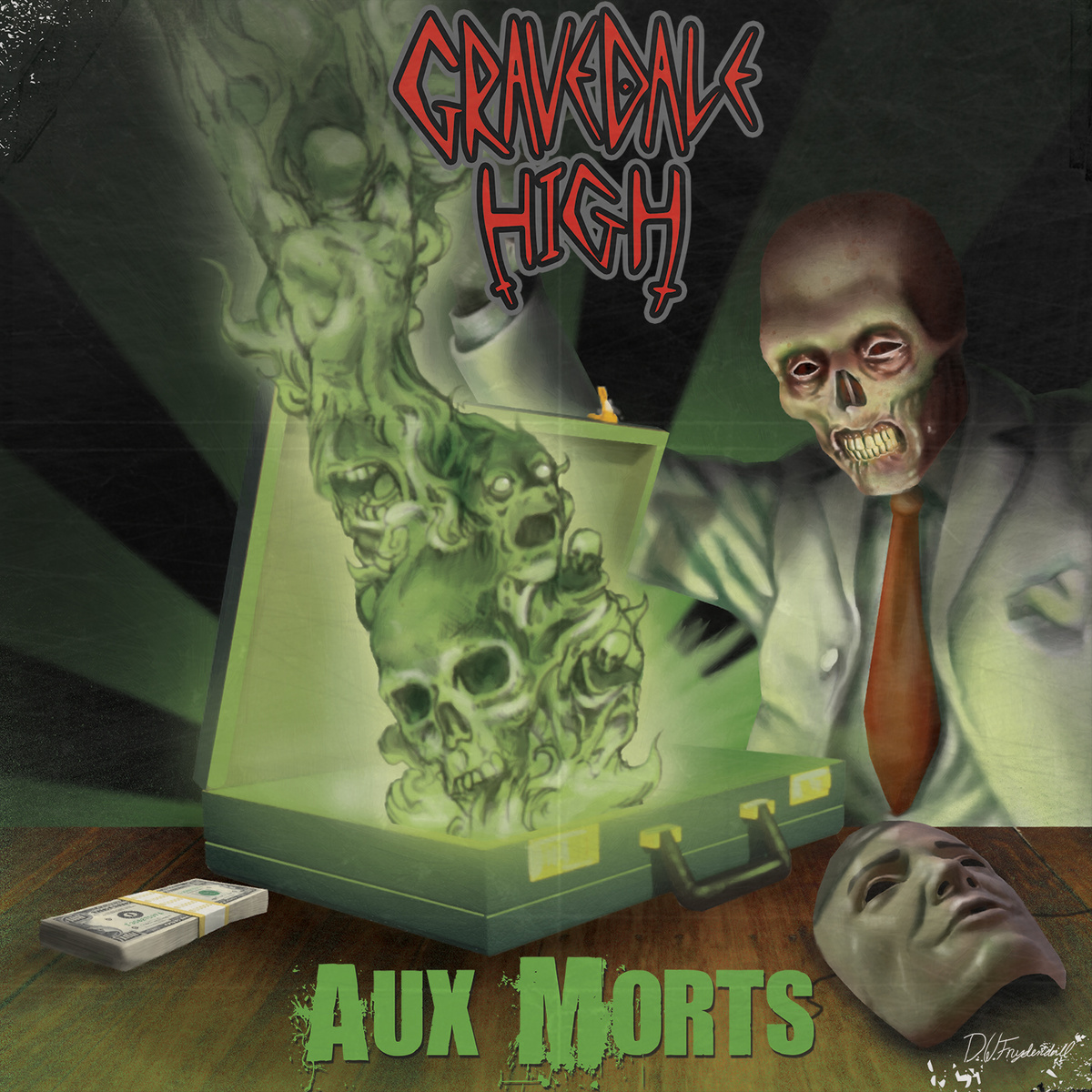 Sure – why not? I mean, I spent my entire day with folk-band from Vancouver Island, West My Friend, yesterday…so I suppose switching it up here to the horror-punk music of Gravedale High would be my natural direction, right? Like I said – why not? I like to keep the sounds moving in all directions and I basically enjoy a largely A.D.D.-like regimen when it comes to listen to music anyhow…and when considering that, well, I don’t know that my next move could have been more perfect in providing a contrast to my yesterday. Gravedale High are certainly not folk music…I might be processing the video footage we took yesterday in the background, but make no mistake – right now these speakers have Gravedale High up loud and proud.

Right away you get pounding drums from Paul Sinclair, crunchy guitars from Dave Billinge that come at you fast and furiously in the opening cut on the Aux Morts EP, “Death Is With Me.” Lyrically it represents the aspect of the ‘horror’ in this horror-punk combination more-so than the music itself, which is a little brighter and upbeat than I was expecting at first from simply looking at their wicked album art. Near the two-minute mark, this five-piece punk band displays an entirely different aspect of their style and sound as they drift into an excellent switch in the tempo and create a fantastic ending for this less-than-three-minute rampage. It just KILLS honestly…I love the guitars at the switch, they just sound incredible. Lead singer Adrian Crowley attacks the song immediately, though I wasn’t quite sure it was fitting in perfectly, or mixed in right somehow…after the two minute mark, as much as I love the music…this is where Gravedale High has to also be a little bit careful…

…as in, it’s completely ok to be classified as ‘horror-punk,’ and that it’s NOT ok to end up resembling Korn in any way. Musically they’re far away from it – but at times, Crowley’s vocals, perhaps in an effort to sound more ‘horrific’ bend a little towards Jonathan Davis. I think even Jonathan Davis wishes he sounded like someone other than Jonathan Davis as this point… Thankfully, it’s not a sound that Crowley completely relies on, and throughout the EP you get a taste of multiple styles from this enigmatic lead vocalist. Much better to come from him as the EP rages on…

“Pere Lachaise” might again represent the idea of the horror in this punk music more-so than the music. I’m not finding anything particularly dark about the music at all; this one actually reminds me of classic-punkers Bad Religion, as does the track to follow, “Cyclopia.” Nearing the two-minute mark again, “Pere Lachaise” just NAILS it for me once again with a very smart switch, incredible guitars and drums leading the way once again. Crowley swells with confidence as this song heads towards the end; he actually reminds me a lot of our own home-grown vocalist Ruddy Flowered of the band Aeterna as he ranges through an excellent set of vocal-scales & tones in “Pere Lachaise.”

“Cyclopia” is just a flat-out assault – I wish you all the best of luck. Just over the two-minute mark in total length; this song goes immediately for the throat and doesn’t let go. At this point on the EP, Gravedale High are sounding like seasoned veterans of the punk scene and have really clicked in together. “Cyclopia” threatens to tear us all a new asshole immediately, and succeeds in just over two-minutes. Huge fan of Crowley on this particular cut; sounds like he’s right there with the music and into it as all hell – great performance here including all the frantic, madness & chaos you can put into a microphone.

Carrying on the energy right to the final moments, the last cut “Exhumed” blazes through less than three-minutes and brings their final impression on our listening ears to its maximum. Another excellent performance from Crowley; both of these final two cuts had him just slightly back in the mix compared to the first two songs, which really helped to get the music to stand out equally as it raised the confidence in his own performance it seems. Unsung hero Aaron West, whose bass-lines have subtly kept this music rolling with the unified sound it has throughout Aux Morts, gets a little bit more of a break in the mix here allowing his parts to shine through a bit more. Throughout the EP, and generally within much of punk-rock, it can tend to be a guitar-fuelled style of music and I think on many of these tunes they might have him turned down just a little too much. From what I can hear, the guy does a solid job – turn him up a bit!

But with that being said, depending on where you look or what you’re hearing, there might actually be one member turned down even more than West… If you look at their social media, the short description lists them as a five-piece; their roster mentions four. Does that mean that YOU are the fifth member of Graveyard High? Or that there’s a ghost rocking out a second guitar? We just don’t know!

In any event, it’s an explosive set of new songs from this band from Norwich in the UK…certainly loud enough to reach us here in Canada. Though I might feel like I somehow missed the horror aspect of their brand of punk beyond the EP’s artwork, I still think there are skilful tunes on display all throughout Aux Morts that reveal the hard-work these guys have put into their music and managed to bring the true-franticness of a live-punk show right into their recordings.

Just because it doesn’t ‘horrify’ me doesn’t make it bad right? To be truthful – a further read into this band will reveal their not trying to scare you with ghosts and ghouls so much as they are relating the real horrors of our everyday lives. You gotta love that punk-fans; this is good, solid punk-rock with real attitude – get your volume knobs twisted up!

And find out more about Gravedale High here at Facebook: https://www.facebook.com/gravedalehigh