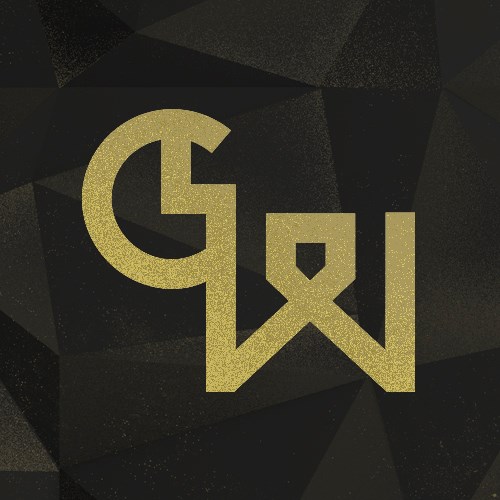 Sometimes you hear a sound of a band that comes out gunning so professionally that it just makes sense to the brain that one day you won’t be the only one hearing what you’ve just heard. I got that feeling about twenty-five seconds in when the bass, drums and guitar of Gold Wolf came in…that tingle on the spine that told me I’m about to hear something special in the rock-genre today. Writing this now after several listens of course – I can fully confirm…we’ve got the start of something wickedly-cool here with Gold Wolf and this self-titled EP.

From what I can see, this looks to be the debut and first pro-recordings from this North London, UK-based three-piece – but man do they sound like seasoned veterans of the music-scene instantly on this EP with the stuttered, complex timings on the opening tune “California Queen.” Even though I’m at odds with the very existence of ‘California’ inside ANY more songs – Gold Wolf isn’t overdoing it like the Red Hot Chili Peppers have in the past…its mention is minimal and more than acceptable when the surrounding music, lyrics and vocals are this good.

I’ve had people ask me why I don’t like Muse any more when it’s clear they’re such a great band – you might have heard that on the recent podcasts with myself and Ryan @ SBS, but in case you didn’t…Gold Wolf answers the question better than I did on the show – I don’t like them anymore because they WERE like what Gold Wolf is doing NOW. You can argue slick production and smoother-sounds all you like…but I’ll take real innovation, creativity and passion like what I’m finding on the Gold Wolf EP and the old albums from Muse over that any day of the week. Their new music is so easily digestible that it nearly gets rejected and thrown back-up immediately like a poison…their old music and similarly music like this from Gold Wolf is music you can chew on like a meaty steak – and who knows when it’s really coming out of your system. See what I mean? “California Queen” puts a big statement out there right away if you ask me…there’s a musical toughness about them in the instrumental parts, excellent harmonies, fantastic dramatics courtesy of the drill-sergeant drums of Ross and spiralling guitars of Tom finding otherworldly combinations as bassist Dan holds the fort in perfect time.

“Equator” will definitely show you the influence of bands like Queens Of The Stone Age and Kyuss as the funk-up the rock in all directions. You gotta love bands like this that really have a grip on timing and style, writing changes & charismatic hooks that hold the attention and captivate the earholes – Gold Wolf puts on a brighter-side of themselves as they step out of the murk of “California Queen” into this inspired pop-rock melody that leans on some of the best they have to offer. Great harmonies, performance, unique-lyrics and a truly awesome breakdown & comeback…this song is the kind of song that confirms the tingle in my spine; Gold Wolf is kicking ass here with this tenderized rock-song.

It’d be very tough for anyone to pin these guys down to one specific style or influence in their rock…they come out storming like Rage Against The Machine on “Gin & Milk” before heading into territory that sounds almost like a blend of Trapt-meets-Oasis. Whatever combinations they use, they use these ideas in their own Gold Wolf blend of controlled musical-madness and bright-rock. The vocals find great ways to match the melody of “Gin & Milk” as the track twists and turns through its changes, finding its way to a sing-along anthem in the chorus before weaving back into the frantically paced verse – great combo!

“B2” worried me a little from its beginning…I thought they might rely on this opening hook rising and falling through much of the song…turns out that wasn’t the case and when it turns up, it’s a welcome addition and ends up being a crucial part of the vocal melody supporting it. “B2” also has one of the most fantastic built-in-for-your-enjoyment/test-to-see-if-reviewers-are-really-awake that I’ve ever heard in a short piano breakdown that sends the music into a complete departure, if only for a moment. I felt like it came out of nowhere when it happened…but it totally worked with the song and I thought “B2” carried on to be one of the stronger tunes on the EP after the second full breakdown. Gold Wolf displays a ton of innovation in this one song…the drums hit with incredible passion you can audibly HEAR clearly and if anything, the amount of cohesion within the creativity of “B2” really speaks to how much there really is going on within this band. With a gift of three players that seem to flawlessly hold their own and song-writing that has longevity written right into it…Gold Wolf could truly go far.

Can I just say that the drum-rolls, fills and pounding beats of the final track “I’ll Be Truthful” make me hard as a fucking rock? Ross really deserves a lot of credit for the energy on this album…he’s clearly a drummer that writes excellent parts and isn’t there to simply keep the beat – he’s definitely a part of the writing…I’d assume it’s shared equally in this band as all three members really take their own turns stunning us throughout these five tracks. “I’ll Be Truthful” almost has a more classic, psychedelic pop-rock vibe thing going on; once again frantically-paced and intense…this final cut elevates the entire EP with a highly memorable ending that has all three members making the most of this debut right down to the final seconds as it fades out.

I dunno what else could be said…Gold Wolf is clearly a strong band full of excellent ideas and outstanding execution that are only going to get better and better as time goes on. Fantastic start on this debut EP – this is a band I’m expecting to hear big, big things from in this decade to come…I really think there’s something special brewing up in Gold Wolf and I’m excited to see where their evolution will take them over time…very excited.

Find out more from their official page at: http://www.goldwolf.co.uk