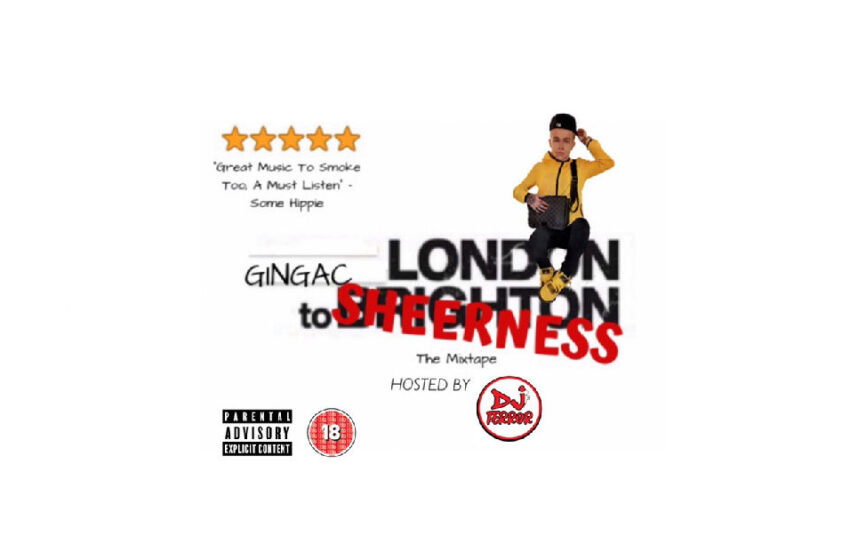 “Secure the bag at all costs.”  #Heard  #SolidAdviceHomie

Word on the street is that The London To Sheerness Mixtape from Ginga C is officially out there online right now.  In fact, I’ve verified that myself & know it’s true – you can find a link to download it from the main website link, which we’ll have for ya down at the bottom of this review for ya.  I’ve picked up my own copy, and I’ve got three tracks to talk to ya about here today as we dig into what Ginga C is all about.  Rest assured there is plenty more for ya on the full record if you like what you hear – there’s fifteen cuts in total, it’s hosted by DJ Terror, there are multiple guest stars found on the album like Dirty Dapz, Symes, Sinxi, Tommy Beane, Bayymack, and Rich T who is actually featured on one of the tracks I’ve been checking out first called “Coming For The Bag,” where that quote you read up top comes from.

So let’s start there…because I think Ginga C has got a cut that’s definitely single-worthy for ya in “Coming For The Bag” – the hooks on this track are seriously strong.  Lots of positives to be found in this song though, no doubt about it – and as you can probably tell from the title alone, it’s relevant.  For those of you from a different generation, “Coming For The Bag” essentially equates to gettin’ that money y’all…but hopefully you know that.  If you’ve got your own stacks up, then you’re probably familiar with every term for the dough that there is…from the bag to the paper to the greenbacks to the “moola” – if you’re focused on them dollars and decimal points, you know what Ginga C is talking about in this first track we’ve pulled from The London To Sheerness Mixtape.  In terms of the performance from Ginga C and the quality of the actual writing & structure & whatnot, I’m inclined to go with all aces here on “Coming For The Bag” – I think this is an undeniable single that is pretty much guaranteed to catch on with anyone listening.  If the verses don’t sell ya, which I’d imagine they will, but in the event that you’re somehow still not convinced, hearing Ginga C surge into the hooks and the memorable vibes you’ll find once you get there will pull the rest of you onboard for sure.  Is there room to evolve from here?  Perhaps.  I ain’t saying that’s not possible.  Performance-wise, I really don’t think there’s anything to complain about – Ginga C is solid as it gets.  To me, the questionable aspects where probably more surrounding the production, but if you’ve ever jammed a mixtape of any kind in your life, you know that the quality tends to vary big-time in that section of your playlists.  I’ll put it to you this way though – a song like “Coming For The Bag” is so damn relevant & perfect for the right here & now of what’s happening out there in the music scene, that I wasn’t always convinced the extra additions from the DJ were entirely necessary is all.  I’m not saying anything is hurt in the process…there’s nothing so detrimental that it’s gonna stop anyone from listening to a track as good as this one is, but yeah…I suppose it’s the difference between listening to a cut that sounds like it’s coming straight from the studio and one being mixed live in the booth, you feel me?  So you get the airhorns, you get the shout-outs in the mix, you get the introduction and a conclusion that act more like a narrative…some of it works, and some of it seems like searching for a sound that works well enough…and in the latter case, I’m just not as sure a song like “Coming For The Bag” needs the extra help when it’s kicking so much ass.  That’s my thoughts on it though…like I said, it’s a song pulled from a mixtape, and you kind of have to expect a few things like that in a situation like this…but overall, I’m absolutely stoked on what I hear.

“No Competition Freestyle” definitely proves the man’s got the chops for this game.  With bars on-point, Ginga C brings it to every syllable with energy and melody, genuinely bringing a presence to the mic that will resonate with the people out there listening.  Dude’s got great pace, stellar precision, and above all things, that sense of how to add melody into what he’s rappin’ about really creates an extra enticing sound…listeners will definitely dig the way Ginga C approaches his music and all of what he puts into it.  I still think he probably stands to benefit from a more standard-type of production than going the mixtape route, but that’s not something that needs to happen overnight.  Right now, we just wanna know that Ginga C has got the ideas and strength in his material to make an official recording worth his time – and just like “Coming For The Bag” proved, “No Competition Freestyle” does as well – this guy has got music that’ll have no problem connecting with everyone listening.  The question becomes, does he really need anything getting in between his natural personality and what he brings to the bars, in terms of the sonic elements running interference along the way?  Again…I’m not entirely convinced about that.  To me, what’s distracting is the variation of the volume when you add these kind of elements in…you get that loud bomb detonation, or the ringing of collecting coins, or shouts that are further above the rest in the mix than perhaps they should be…and ultimately, I’m really just looking to hear Ginga C work his magic on the m-i-c because that is the main draw without question.  So for me, anything in between the man and the microphone is almost risky…Ginga C needs a beat & some bass and that’s really all the guy has to have to make his rhymes work with his natural gift for melody & inherent ability to entertain.  A mixtape is a stylistic choice though y’all…I can drop all this advice on the guy, and maybe it makes sense, maybe it doesn’t – the reality is, it’s an entire genre that’s got scores of songs that would exceed what you could listen to in one lifetime, so it IS a style that people tend to dig, you know what I mean?  All that kind of stuff is just personal preference…so take whatever I’m saying with a grain of salt and you do YOU at the end of the day – DJ Terror’s still rad to have around, he’s just not the main draw to me is all I’m saying…and if Ginga C is gonna hit up that mainstream like he’s likely looking to one day, he’s gonna have to leave the format behind eventually and go straight to the studio.  You listen to ideas like you’ll find on “No Competition Freestyle” though and you know he’ll be welcome.

While it would definitely be fair to say that “M.E.L.A.” would be a distant third place for myself personally, that doesn’t at all mean it wouldn’t be a track that could still verifiably catch fire with the rest of ya out there listening.  I wouldn’t go as far as to say I’m indifferent about it, I’m just more stoked about what I’ve heard previously on “Coming For The Bag” or “No Competition Freestyle” is all.  You might feel the completely opposite, and that’s more than okay…our differences are what make the world go ‘round y’all.  The bottom line is that Ginga C hasn’t let the quality drop in the way he performs – “M.E.L.A.” is still further proof that the man knows how to make his moments on the mic truly count.  Hooks-wise, there ain’t no doubt about how catchy and memorable a track like “M.E.L.A.” is either – to the point where I’d say that it’s another quality candidate to be a single from this record, even if it’s not exactly my own thing, you feel me?  I might be inclined to go with tracks like “Backwoods,” or “Chosen” for sure if that’s what we’re talkin’ about though…maybe “Not Tonight” or “Rockstar” – you get the idea – he’s got plenty of options and it’s clear that Ginga C has got material that’s gonna get him to the top.  The best advice I’ve got for the guy is to consider things from the listeners side of the speakers…you wanna avoid those huge spikes in volume, otherwise it’s much tougher to convince people to strap on their headphones and keep your music rockin’ with them at all times…but that’s an easy fix at the end of the day, it’s just fairly crucial to keep in mind.  Give the man some time, give the man some room to do what he does and sort things out…trust me, I’m confident that an artist like Ginga C will get to where he wants to go with the skills he’s got & reach whatever kind of success he’s looking for on his own terms.  Everything I’ve heard on The London To Sheerness Mixtape fully confirms he’s got the goods…it’s simply about refining that natural raw talent from here on in, and I’d bet on this guy to go the distance for sure.

Get yourself a copy of The London To Sheerness Mixtape at the official website from this link right here:  https://www.moderndayhippiemusic.com