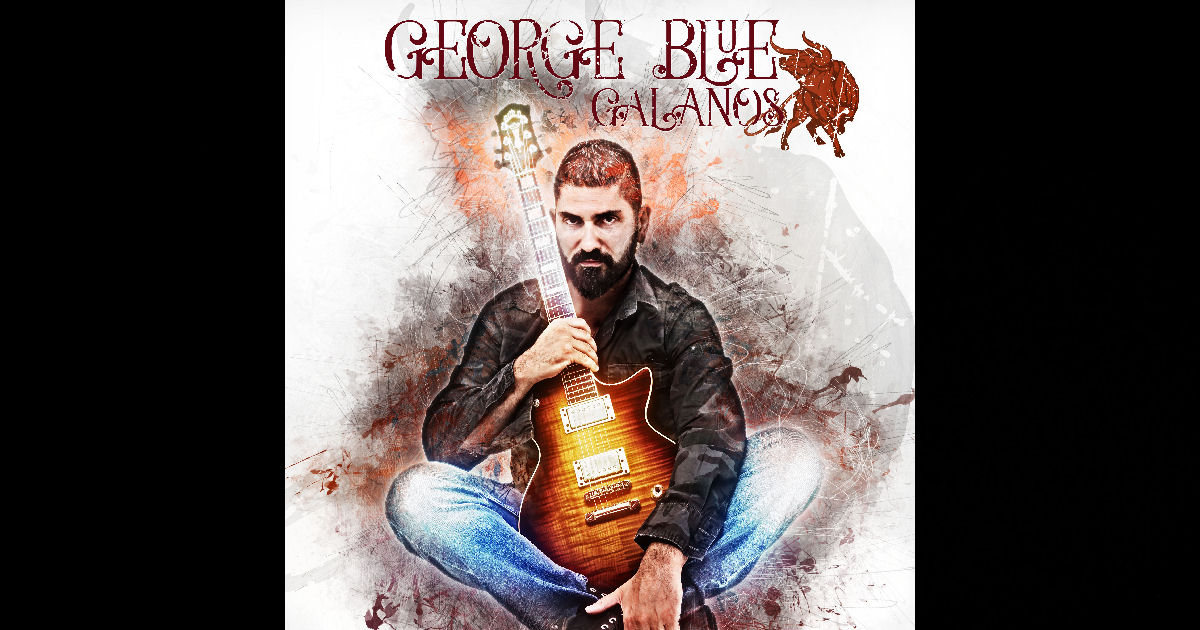 BOLD Blues-Rock from solo-artist George Blue Galanos on his new single “I’m Dead Inside” – dude’s diving deep into the pain, soul, and musicianship that have served the genre so faithfully over the years.  I think what people will really love about George’s approach is the sincere raw edge you’ll find in his vocals & instrumentation…a noticeable power & enhanced aggression add even more gripping emotion to the way he plays & sings his latest jam.  First thoughts that came to my mind when I started listening to “I’m Dead Inside” were about just how true to the tone & sound of real Blues-Rock this man can be – it was almost like listening to a Gary Moore track, but with a much more present intensity & raging passion the music.  In a genre that’s classically built upon moves that have been previously made, it’s the subtle differences & changes like this – or perhaps not-so-subtle in George’s case – that really make things stand out to us.  Blues-Rock can often pair a great singer with a song that doesn’t quite have as much bite as the vocals do – and I think that’s what people are going to love about Galanos – he’s gifted in both areas and a competent, capable, & wildly talented musician with excellent balance in his abilities & overall sound.

You’ll hear that skill immediately…that connection George has with his guitar shines radiantly through the way he plays and the immaculate tones he gets from this killer cut too.  With a backing band stocked with ace-talent playing with him, the drums from Stelios Pavlou make a huge impact with his precision, the Hammond organ from Asterios Papastamatakis is an essential part of building the most epic parts of the song’s structure, and the bass from Marcin Palider keeps the rhythm-section supplied with grooves.  Combined, they all move together perfectly as a unit as they shift & transition through “I’m Dead Inside” and prove they can stop & start on a dime, bringing the dynamics of this single straight to the surface in the process for all to hear.  The main star of the show remains firmly in the spotlight and confidently leads the way to success on this single, lighting up the fretboard with his fingers on hot solos that show George’s impressively sharp skills and smart instincts for what to play & when to play it.  The mix of energy in the music from its smooth & chill glide through the verse works brilliantly with the amped-up edge and vibrant distortion of the chorus – and you’ll find that George is equally well-suited to both of these main parts of the song as a vocalist as well.  He’s got a great understanding of when to pull the switch and surge into the searing pain of the Blues, but certainly also of how to wield its true power.  He’s set himself up for BIG moments that pay off throughout this song – you’ll find’em in the verse, definitely on the way into the chorus, and then the chorus itself is basically built of massive moments; in contrast, those moments where he exits those epic spots of “I’m Dead Inside” and reverts back to the down-tempo melancholy chill become just as memorable & powerful – like I said, great balance here.

ALL that being said…I mean, c’mon…when this guy goes for that first main solo just past the three-minute mark, that should drop your jaw to the GROUND and you should be in complete awe for the sixty-or-so seconds to follow as George reveals just how great he truly is when it comes to his musicianship and instrumentation.  Love the way the music gets as intense as the emotions of the lyrics, and I love the way this man plays, straight-up, full-stop; you can see it onscreen in the video for “I’m Dead Inside” – watch the way he moves and how sure he is…the man knows his way around a guitar inside & out for sure and has an excellent touch & feel for the style of music he’s chosen to play.  If you’ve ever spent time with the guitar gods of this planet, you already know it’s a mixed-bag when it comes to how many of them can confidently take to the mic as well as they do their instrument – the fact that George can do both so capably will take his music a long way.  There’s no doubt that it’s going to be those incredible guitar solos that stand out the most to people, because they are seriously amazing and really do show the technique that George has right there onscreen in the video – and you musicians out there will certainly be able to hear it in the way he plays without question.  All I’m saying is give the man some credit where credit is due – he’s miles ahead on the microphone already compared to half the guitarists out there and his bold soulful approach to Blues-Rock has genuine identity & style.

“I’m Dead Inside” comes from the self-titled EP by George Blue Galanos – make sure to find out more by visiting the official website at:  https://georgebluegalanos.com