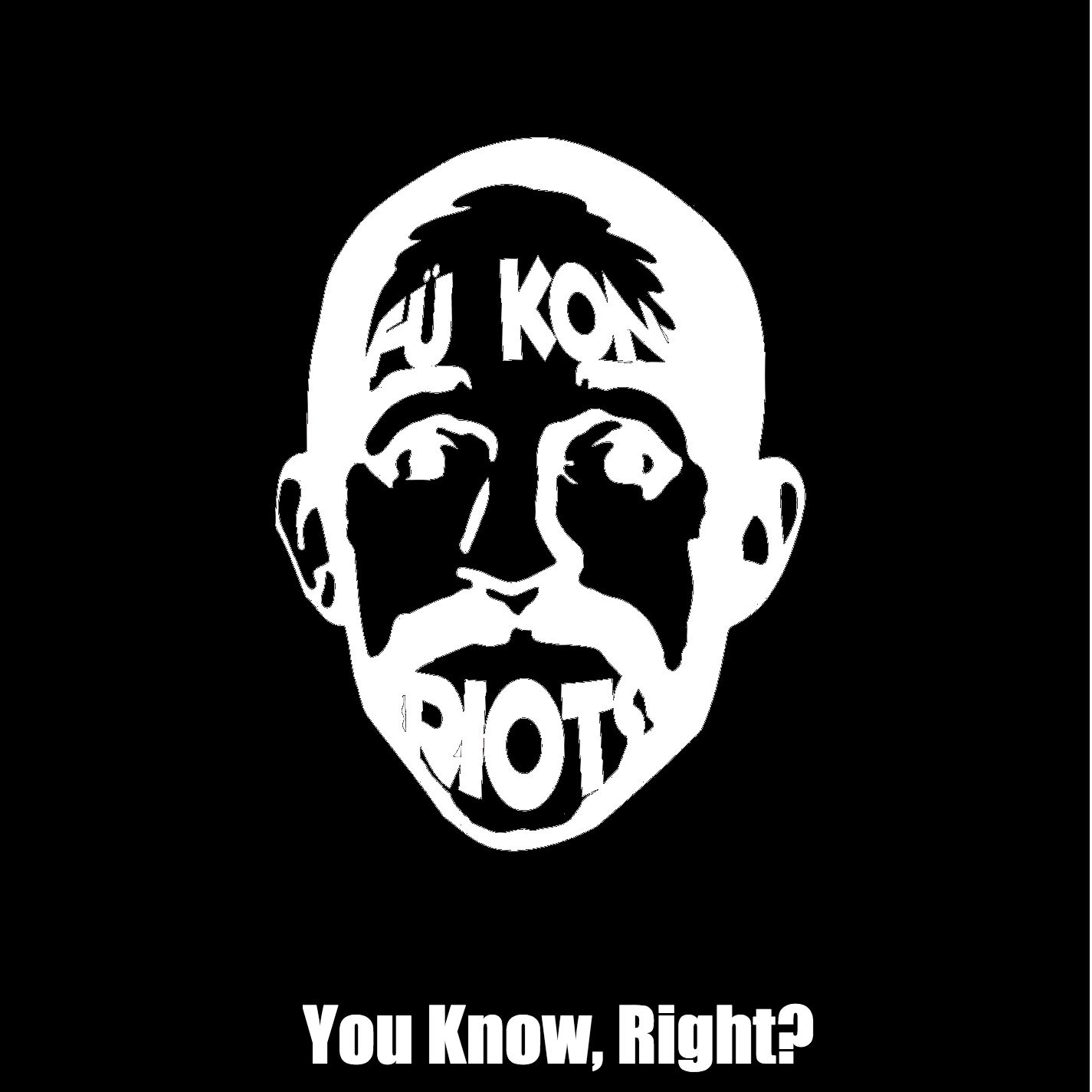 Vancouver, BC’s own Fu Kon Riots – a trio of unleashed musical fury – released their debut EP just shortly after we covered another Vancouver release from this year early in January when Fey released Bye Bipolar. Now…what I didn’t realize at the time, was that at the CD release party back on January 10th, the Fu Kon Riots would have been in an equal celebratory mood that night as they took to the stage to open the show with their songs here on their You Know, Right? EP to be released officially only two weeks later.

To be completely truthful…up until the very moment I saw them onstage, I was yet to be aware of all the insane noise and chaos the Fu Kon Riots were creating. What I saw live at The Railway Club that night was nothing short of heroic…mind you I had a few beers…a little of the details are somewhat fuzzy… I was also freshly-shaved for the new year, and I stood right next to my good friend Ryan Rutherford of the band Closer for most of the Fu Kon set without him even recognizing me…

But from what I remember, the Fu Kon Riots nearly experienced a meltdown of equipment and chaos onstage that night, and if not that, then I need to go and see another show to get a real grip on how these guys throw down. Because what I saw…was three guys putting the maximum energy & effort out there onstage and their equipment crapping out intermittently throughout their chaotic set – many of you have been there before…we all know this is one of the most challenging scenarios you can go through live.

There is a very small handful of things I regret when it comes to anything sleepingbagstudios related. Due to my being there in the first place to film Closer and Fey that night…I was in full-battle mode, loaded and ready with cameras, backup batteries…the whole bit…but I really was only planning on filming the two bands. When things started to go south equipment-wise for Fu Kon Riots onstage…the part of me with killer video-instincts said to start rolling tape; the part of me with a beer in my hand simply told me to continue watching the show. I regret, sincerely, that I did not record the Fu Kon Riots show that night…because what took place over those next 15 minutes would absolutely make me a believer…

I remember Kristoff Maier, the drummer, accepting no more shit from this show and the equipment issues, and just KILLING the drums. After listening to their EP officially now, though months later, I still feel the need to point that out; the guy just lit up the stage with octopus-arms and beat the shit out of the skins. With intermittent equipment & house-sound issues stealing some of the thunder from Kevin and Anthony – Kristoff became the anchor that mounted their comeback as the other instrument not plugged in and nearly stole the show that night. He was out of breath completely by the end, and rightly so – the dude gave his left-nut to Vancouver from the stage that night.

Kevin their lead vocalist and guitars, and Anthony their bass-player seemed to feed off of his never-say-die energy and responded by lighting up the front of the stage with some incredible antics. In the end – I’d say for what it was worth and despite all the trouble they had – that was about as pure as entertainment can get, the music that broke-free was amped-up and got the crowd roaring for them to succeed and really set the tempo for a whole night of noise, rock & grunge. Many bands would have crumbled under the weight of just how many issues they were experiencing…Fu Kon Riots completely triumphed over it all and definitely put themselves on my radar that night.

And here we are…months later…with me at least proving that I will review your albums and EPs, always, but sometimes DAMN does it take me a while to get to them or what? I know that the Fu Kon Riots, and you as well once you listen, are all probably wondering why in the hell or how in the hell does it take someone SO LONG to write about five songs equating to less than eight minutes in total? The answer is simple and thoroughly unsatisfying…I am just a sad man with lonely speakers to keep me company; I’m slow, transparently unprofessional and full of excuses. But I’m HERE! Even if I’m late to the party…I’m here, and now you HAVE to put up with me.

What I like…a LOT…about the inspired noise-rock of Fu Kon Riots is just how straight-to-the-face their sound really is. The opening “Intro” pretty much lets you know most of what you’ll need to know in preparing to brace yourselves for the massive sounds to come. For a three piece, this is at an all-time kind of LOUD; as the “Intro” drifts into “Knock Knock.” These two tracks are essentially combined though Knock Knock brings in the distorted and awesome vocals from Kevin Reimer into the mix as they continually raise the energy, tempo and sounds right up to the rafters.

I’m loving it for how loose it sounds overall, how genuinely raw it translates through the speakers, but also how precise it really is despite what you might be hearing at first. You can pick it apart, but these guys are inspiringly on-beat and have really got themselves the perfect mix of chaos & control with really captivating short-bursts musical ferocity punctuating their skills of assembly/song-writing with an exclamation point all EP long.

Anthony Morelli decides to take over driving for a minute and seven-seconds on “Do You Love Me?” With a burly bass-riff opening up this cut, the guitars and vocal flow are soon to join in on the pattern and maximize this melody by all working together in a way that’s riotously fun and rocks with extreme franticness, madness and verifiable hooks. Much like Fear used to rock the fuckin house down in under two-minutes – Fu Kon Riots might just be the next best thing to Lee Ving and his old crew. Even in a genre infamous for songs of a short length, Fu Kon Riots are up louder, pounding harder and bringing it straight to you with an intensity that most bands will never know existed. A perfect example of this, even though they might get kicked out of the two-minute club for making “Fuck You Death” seven seconds over the limit, the song is undeniably one of the most powerful on the EP. Lyrically, it’s brilliant – I don’t care what anyone says. It’s music based in freakin’ punk-rock people – and this is the attitude we all know, love and respect the most displayed in this song. Completely wry & dry through the humor and candor – the delivery & performance should simply give you a massive music-boner or moisten your lady-parts. As “Fuck You Death” switches in between its verse and chorus, this stop/start beat is freakin breathtakingly intense and an absolute highlight on the EP. I’m not suggesting these guys start hitting up the progressive-rock eleven-minute long anthems, but with this being the longest song on You Know, Right? – it’s one that reveals that allowing themselves a little more time to expand their ideas and sound does serve them extremely well.

These songs are FULL. Again, for three people, this is as LOUD and right ‘in-there’ as music can get – you could not possibly escape the wall of sound Fu Kon Riots create and pound into you when they’re playing. As a guy that’s now seen them live and heard them recorded – I can officially vouch for this band as one of the most raw, energetic and explosive sounds I’ve seen and heard this year for sure, possibly in this decade so far. And NO – that’s not me simply supporting the ‘home-grown’ of it all…Vancouver has some horrible music too…we just try to keep it under the rug is all… Fu Kon Riots are a band I can only hope continually builds on their wildly massive sound and continue to innovate as creatively as they are here on this EP in their future work. They’re a band that deserves the legitimate support they’re receiving here because their music kicks fucking ass – we all know there are links right here on the page…go ahead and click one if you don’t believe me…

With a final explosion of punk-rock fury, “Back Of My Pocket” is a real crowd-anthem you can virtually imagine people chanting along with at their shows. They play this last song like they somehow assumed you HADN’T heard them all along throughout the rest of You Know, Right? and turn the energy and volume back up to eleven as they pour out sweat and distortion through this final cut. I’m a big fan of Kevin’s sound on the vocals – you’ll never hear him ‘straight-ahead’ there’s always some distortion going on and it sounds perfect for the sound of Fu Kon Riots.

For all their chaos – this is one tight band. Seeing them live was an experience to remember, and now hearing the EP has completely confirmed that Vancouver is certainly brewing another monster sound through the Fu Kon Riots and I’m expecting even bigger, somehow more explosive sounds from these three to come in the future. You can certainly expect to see me at one of their shows coming up this summer…and hopefully, if I play my cards right…maybe just maybe we can get them to come out here to do an episode of SBS Live This Week…just sayin…

Support them at Facebook here: https://www.facebook.com/FUKONRIOTS – you’ll still be early enough to be able to claim years later just how cool you were by discovering these guys ‘first’ way back when.