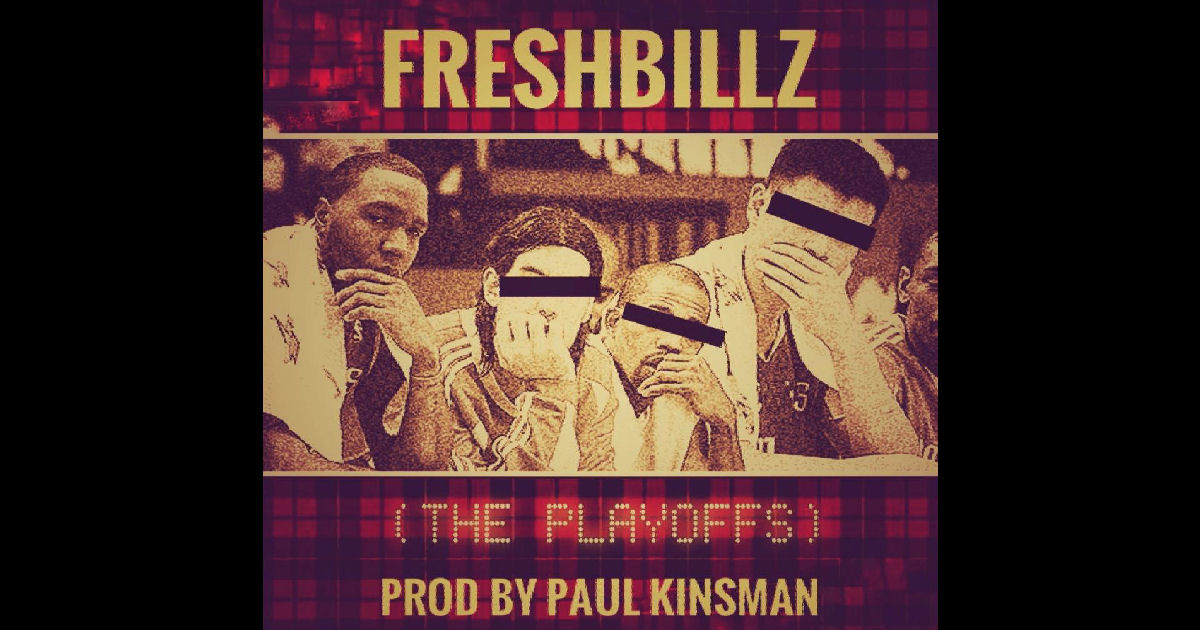 Certainly the right time of year for this cut to come out…I don’t see/hear any reason why the Houston Rockets wouldn’t want this as part of their soundtrack as they roll through to the final & win it this year.  I have no idea if Freshbillz is anywhere near Houston, but I’m sure they appreciate the anthem.  For the record, I’m not anywhere near Houston either…I just know facts are facts and them boys can BALL.  #yearofthebeard

Freshbillz creates a cut built on vibe with “The Playoffs” – produced solidly by Paul Kinsman.  With all the chants and hype happening in the background, it sounds like he’s brought the whole posse with him and like they’re all amping-up this emcee throughout the first forty-seconds or so before the main man in question steps into the spotlight.  Freshbillz doesn’t disappoint, dude confidently grips the mic and lets the words rip while he’s spittin’ bar-after-bar of quality rhymes, pivoting & shifting with great pace and precision, landing the words, syllables, and emphasis with the punch it needs to make an impact in the pace & timing of his flow.  I can admit, it took a bit for “The Playoffs” to get rolling for me…I’m not opposed to the intro and I definitely get that every song out there has gotta start in some way, shape, or form…but I’m also not shy about letting you know that it’s when Freshbillz steps to the mic that this single really starts to fully find its way forward.  And then literally from the moment he starts rappin,’ the man takes over the joint and the entertainment really starts heading towards that next-level.

Satisfying cut all-around once it kicks into full-gear.  Freshbillz mixes up the energy on the mic with a professional versatility that has him looming large over top of the music, spittin’ lyrics out in different tempos and flexing much skill along the way.  I’d argue that the verses are loaded with just as many hooks as the chorus is…which may/may-not be something to examine for the future if Freshbillz wants that second main element of the song to really pop – as of right now, “The Playoffs” makes most of its changes through his lyrical flow…the music could follow his lead in the chorus and add a few more dynamics to make the moment really stand out…like I said, something to consider.  As it stands, this single ends up with solid balance all the way through as a result, and the smooth transitions from bar-to-bar from Freshbillz keep the verbal action coming swiftly, focused, & intensely the entire time.

From everything I’ve read, this collaboration between Freshbillz and producer Paul Kinsman of Inotech3D is still fairly new and on its way to even bigger ambitions, with an EP called Innolumanati coming out pretty soon.  Does “The Playoffs” do the job that a single needs to do…to get us all enticed into listening to what comes next and excited about where everything could go in the future through this collaborative effort?  Sure thang homies, it does.  The boldness in the vocals on “The Playoffs” will give this cut the edge in making that impact on your ears, stereo, and playlist…I think Freshbillz ends up making quite a few memorable moves on the mic with the music he’s got backing him on this track.  All-in-all, it’s a solid first impression and you can hear there’s a lot more in the tank in terms of potential – I think like most projects, bands, or artists, you’ll see this collaboration go on to get extremely dialed-in to what they want to accomplish over the next years and hit their stride even more.  But as an introduction – I’ve certainly got no real beef with “The Playoffs” – I think they’ve created a decent cut that’s certainly worth your time.  Looking forward to hearing how this new music-partnership takes shape in the future – and that’s based on the strength of a good single, which is what they’ve got with “The Playoffs” here.

Find out more about Freshbillz from his official Facebook page at:  https://www.facebook.com/BILLZYBABY/