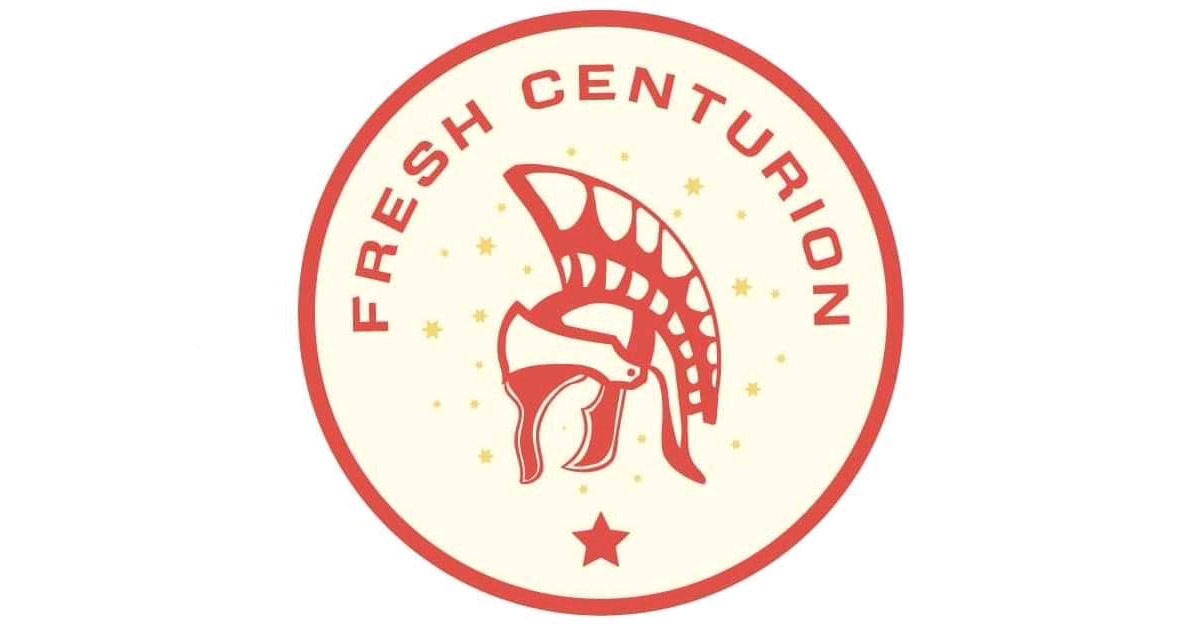 Ladies & gentlemen we sound like we are on real solid ground with this band from Belgium right here.  Fresh Centurion sounds determined to kick ALL the ass, and this kind of gritty rock with ultra-smooth hooks is pretty much exactly what I’m in the mood for right now.  I’ve been into all kinds of loud-stuff here lately from Metz to Whores. to Failure to Idiot Pilot & beyond…believe it or not, spending so much time in the independent music-scene over these past seven years has actually disconnected me from the mainstream quite a bit…seeing the sheer amount of records out there by bands I love that I didn’t already have was staggering.  So I fixed that by going on a savage downloading rampage…and turned the volume right the fuck up to the rafters to heat this summer up good’n’proper…and it remained there at eleven, red-hot & ready for a band just like Fresh Centurion to rip it up and represent the independents.

So…we’ve got the three opening cuts from the new self-titled record to get a sample idea of what’s up on this album by Fresh Centurion.  Let me tell ya about guitar-hooks dear readers, dear friends – they’ve stumbled onto one of the most deadly and enticing riffs you’ll hear this year…like…for REAL people, EVERY single time “Russian Scientist” hits the TWENTY-THREE SECOND MARK (slightly specific) I get a raging music-chubby…because that…THAT is an unbelievably killer sound right there.  Severe, savage, and all-out gripping, Fresh Centurion plays with the intensity & rawness of The Jesus Lizard…jams in wild riffs like a Kyuss or Queens…and up-front on the mic, you’ve damn near got Mark Lanegan on the vocals here – what more could you possibly want?  I’ve actually spun the record beyond the three tunes I’ll be talking about here in review today…and for a lot of the songs, you’ll actually find that Stephane Scandella (Singer/Bass) ends up sounding quite like a version of Bowie for many of the tunes, but not this first one…this is much more towards that mysterious Lanegan-esque level of coolness & badassery.  What a freakin’ RAD cut and remarkable first impression!  “Russian Scientist” continuously scorches with scathing sound and a brilliant performance from all hands on-deck.  Maybe a lil’ room to evolve & improve when it comes to the production aspect…I’ll leave that up to you & your own personal taste to decide…when I’m in the thick of the murk of a grinder like this song, I’ve got no problemo whatsoever with the mix reflecting a bit of that grittiness of the band – it should, in my opinion.  To me, Fresh Centurion is getting this first cut about as right as you could possibly hope to hear, uses contrast exceptionally well between the wild brightness of the searing guitar-tones and low-end vocals, and establishes a massive impact at the beginning of their album with riffs that can’t possibly be ignored.

I want it on the record, Maxime Pierard (Guitar) is my new hero.  Don’t get me wrong, I’m really digging on what I hear in the gripping energy of Fresh Centurion as a band all-around, but it’s Pierard’s guitar-work that seems to be providing the most memorable hooks in these first two cuts from their new album.  And there ain’t nothing wrong with that…like I said, you’ll find tons of other stuff to keep you plenty captivated – David Collu (Drums) for example, is a complete warrior beast back there on the drum throne, playing like an eight-armed octopus with really innovative & inventive contributions that count in these compositions.  LISTEN to the way they storm into the beginning of “Only One” before they end up in the smooth chops to follow – they are PUNISHING speakers with sonic awesomeness, and I’m absolutely LOVING IT.  Same thing applies to the guitars you’ll find in the chorus…amazing once again…really smart ideas in their musicianship that genuinely stand out.  Stephane’s in his Bowie-esque gear for the most-part on “Only One” – and to be quite honest, I’m actually seriously impressed with how well his vocals have suited the intensity you’ll find in the music of Fresh Centurion.  Because in a way, maybe it shouldn’t work…maybe there’s going to be a few people out there that feel like the energy needs to come up or a scream or two needs to be let out to rival the savagery of the music surrounding the vocals…and hey man, that’s probably fair…some people are gonna feel that way and that’s just how life is.  You’ll get a bit more bite from Stephane in that sense on the track to follow called “Coworker Rage” – so just hang on a second will ya?  Maybe the dude’s still getting himself warmed up!  What I’m saying is, I think you’ll find these vocals fit much better than you’d think if you were to look at the mechanics of a band like this on paper.  The full combination of slickness on the mic & explosiveness in the music is totally establishing the signature sound of this band anyhow – all these pieces of the puzzle need each other, but thankfully this set comes with everything you need to get the full picture.  “Only One” is another dimension/aspect of their sound that reveals the crossover potential that exists; Fresh Centurion is masterfully blending the classic style of the old with the cutting-edge of the new here.

Listening to these guys detonate completely as they explode into the fierce thrashing energy of “Coworker Rage” is just about everything my ears wanna hear, all day, every day – like, is it just me or is Fresh Centurion SLAYING the beginning of this record or what?  These opening three tunes as a sample, first impression, or gateway, should easily prove to any set of ears that what this band has got is more than worth your time…checking out the rest of the record should be a no-brainer after hearing how supremely supercharged this band is as they surge through “Coworker Rage.”  I’d definitely be looking at this cut as a single if I were Fresh Centurion…ultimately I still think the biggest hook I’ve heard is in the guitars of “Russian Scientist” at the very beginning of the album, but if we’re talking about overall performance and accessibility, I’d say that “Coworker Rage” has everything the people want & more.  Straight-up, what this Belgian-three are up to, is EXCITING, full-stop.  I hear a track like “Coworker Rage” and how they’ve literally held nothing back from the very first seconds to the final ones, and it literally fills me with pride for the independent music-scene, especially on an international-level.  What Fresh Centurion is creating, is a highly-universal energy that’s as captivating as it is compelling – they might still be early on in their career by quite a stretch of the timeline, but the amount of promise & potential here is freakishly staggering…a song like “Coworker Rage” has hooks flying at you from every angle, with each member of the band confidently holding their own and a seriously highlight performance from Stephane on the mic to rival the brilliant & savage energy & sound in the music.  This is everything coming together, just as you’d ever hope it would…”Coworker Rage,” might crash & bang in every possible direction it can, but every moment truly counts and stacks up to one seriously incredible result.  I think the entire Alt/Grunge/Metal/Rock community at-large is going to be fully stoked about these guys – I dig everything I’ve heard and feel like they’ve given me every reason to believe that they’re just going to get better & better from here on in as well.  Mammoth sound and monstrous doses of energy in the music of Fresh Centurion – these are 100% killer cuts and a wicked introduction to a great band.