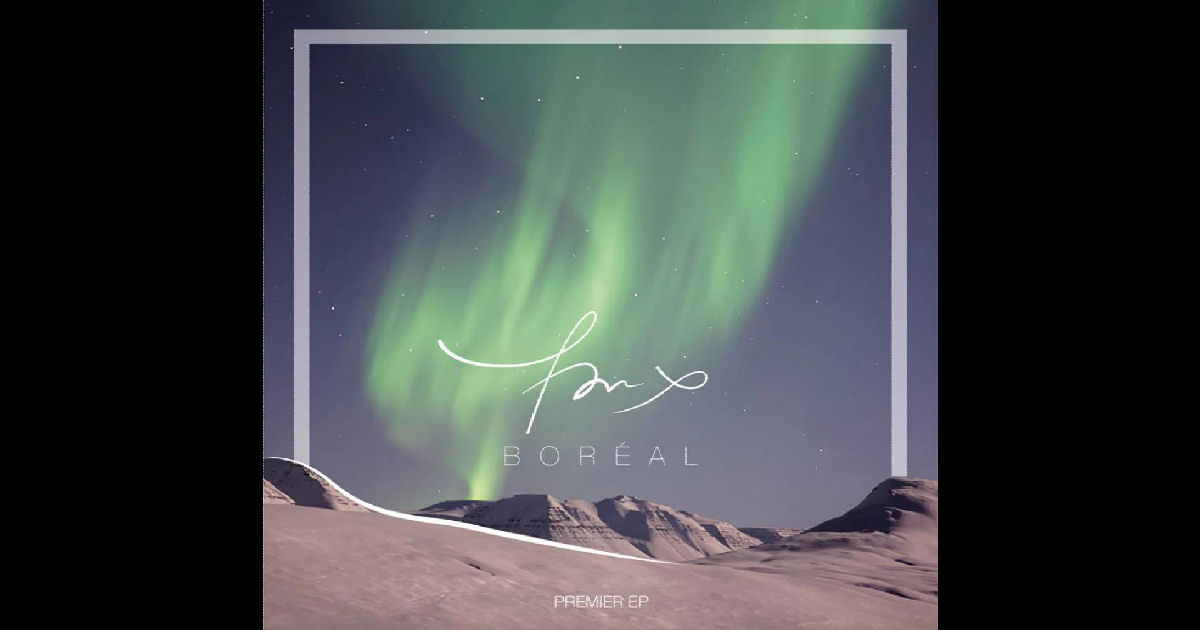 In six songs and an experience that was altogether too short – Foux has released an absolutely stunning EP officially today, called Boréal – and for you electro-fans out there, do yourself a favor and make sure to check this out.  After everything I’ve heard, Foux has given you multiple reasons to be stoked about what you’ll hear on the Boréal EP…the mastery of the dynamics of sound are all over this record!

You may wonder about how addicting the sounds of this EP truly are…let me explain that as best I can.  It doesn’t happen too often, but occasionally, as an album is prepped for its official release, the private links become public links and things get shuffled around online…sometimes they even disappear for a moment or two as the switch occurs.  As I was getting into the Boréal EP – this happened to me – it felt like as soon as Foux got me absolutely & impossibly hooked on his new EP, it vanished!  And I panicked!  Not because I needed to finish this review…I certainly wanted to, because today’s the official day of the release and I’m seriously excited about this record – but the facts were, I was DYING to have the experience of listening to Boréal again!  Not having access to it all of a sudden made me curious as to how I was going to get through the night without the energy I was specifically seeking in the uplifting sounds and creative vibe of Foux’s music.  I should have realized that everything was making its way out onto the internet for public consumption – the day is finally here and the Boréal EP is available to ALL!

And no joke – this is a set of six songs to seriously celebrate and turn right up as loud as you can handle.

I’m talking about the ability to establish a real impression within less than five seconds and what you’ll instantly recognize as the creation of an unforgettable experience in less than thirty.  For an introduction to Boréal, “Intro (Down On The Sea)” gives you just a snapshot glimpse of what this guy is capable of – and just like so many situations on this short & sweet EP, he leaves you rabidly hounding for more the minute it’s over!  “Intro (Down On The Sea)” is just over a minute in length…and like…I could have easily listened to it for an hour and never felt bored.  You immediately understand the level of talent & skill that exists in Foux from the incredible mix on this first impression – the depth of the pulse & grooves of “Intro (Down On The Sea)” are so pronounced that they could honestly induce motion sickness – that’s how much definition there is in the flow of the sound and how strong the movements are between the lefts & rights.  Don’t let that description put you off from taking the ride – the melody that’s already existing and present on “Intro (Down On The Sea)” will 100% convince you to keep listening – it really is that good, right from moment one.  If this is what Foux can do with just a minute’s worth of time – you can already sense the potential for the awesomeness that a full-length cut could contain.  What a truly stunning beginning to a brand-new experience in sound…I love the way that Boréal begins!

Those vocal samples you hear in the mix of Foux’s music become a signature staple of his sound quickly as he threads them into the atmosphere of “Boo” and transitions the textures of the EP into even more dynamic terrain.  “Boo” has a distinct electro pulse and melody, brilliant editing and percussion sounds in the beats…it’s quite ambitious really for less than two & a half minutes; it has certainly also become clear just how well Foux thrives within a short timeframe – he makes the magic happen at every moment and makes sure that every second counts for something important in the song overall.  He’s like the most efficient machine in music you can think of – no sound or energy goes to waste and he’s able to find multiple purposes for each and every one, never letting the entertainment level drop.

Some of the strongest hooks you’ll hear on the Boréal EP are on “Green Mist” – in fact, if I was to point to one track directly as the potential single…this would likely be my choice.  The following two tracks, “Song For Boul” and “Dancing Lights” could give “Green Mist” a run for its money as the people’s favorite – but I highly suspect that almost everyone out there will get sucked right into the incredible groove and pleasurable hooks that “Green Mist” provide.  How could you not love this?  Love the way the song begins with the historic vocal sample and continues that thread running through much of this track…I believe if I’m not mistaken, that’s the voice of Winston Churchill that we’re hearing.  In amongst some of the most vibrant and catchy hooks that you’ll hear on Boréal, “Green Mist” also manages to say a lot through the addition of the samples, which are perfectly placed in the song so that they too make an impact on the atmosphere and movement of this brilliant cut.  Heck – you might even learn some history on this song!  Not only do you get something awesome to listen to, you get an education as well!

“Song For Boul” is likely one of the record’s most accessible electro-grooves…I would count on a lot of people out there identifying this cut as one of their favorites.  There are so many rad things happening from the sounds of the electro-rhythms and pulsing synth, to the music-box melodies and incredible vocal-samples edited into the mix – “Song For Boul” is undeniably interesting to the ears and makes a verifiable attempt at your attention through a plethora of ideas and imaginative elements on display.  The way this song adds & subtracts sounds along its journey in sound speaks volumes of the creativity you’ll find in Foux’s music – everything flows so well here that each addition, subtraction, twist & transition is executed with flawless precision.  “Song For Boul” has some of the boldest sounds you’ll hear on the EP mixed in with some of the record’s most delicate, creating a real contrast that works between the loud/quiet dynamic with confidence and an outstanding amount of definition in the music.

I had to keep reminding myself that this is a DEBUT EP from Foux as I listened to it…because everything is put together so insightfully well and incredibly tight that you’d expect this level of professionalism from a seasoned veteran of the scene.  To think that Foux is just getting started makes me STOKED about the future…because more of THIS is what my ears certainly want!  LISTEN to the intricate editing, structure, flow and assembly of a track like “Dancing Lights” and recognize the amazing ear for sound that this electro-wizard has!  I fail to understand how an artist could pack a better combination of inviting & exciting electro-melodies into six songs like Foux has – the EP flows perfectly and all the music has such vibrant imagination and colorful choices in sound that you’re either in awe of the production or blown away by the composition…either way, this guy will have you on his side and ready to bust a move.  The way he uses the vocals samples as a main rhythm in the electro groove and a variety of eastern-influences in the sound selection of “Dancing Lights” is sure to catch people’s attention and put them in a fine mood to bring their dance moves to the front of the house.  Foux glides perfectly from the ending of “Dancing Lights” into the extraordinarily catchy rhythm & groove on Boréal’s final cut, “Aurora.”

With its music-box beginning, “Aurora” takes over perfectly from where “Dancing Lights” left off – like an audibly logical conclusion to the final moments of the record, or almost like a two-part song within the final tracks of Boréal back-to-back.  “Aurora” adds an extra layer of sweetness to the melody, smart ideas on what sounds like electric-piano and steel drums…a light reggae and island-vibe floats through this last track on Boréal, creating a bright & lighthearted energy that gently finishes off the record with real style and the incredible attention to detail in the production and movement we’ve now become accustomed to from Foux’s extraordinary debut effort.

I’ve been fortunate enough to be on a run of some truly great songs, records, and ideas to start 2018 – but I gotta say, this might be the front runner so far this year when it comes to stunning sound.  Beyond impressed with how tight & cohesive this experience was…what Foux is creating through the songs on the Boréal EP is essentially flawless in structure & style and designed for pure enjoyment & maximum entertainment in every moment.  Who doesn’t want a TON more of this by the time it’s done?

I know I sure do…and I have every reason to believe you’ll feel the same way I do.

So perhaps the best news of all really, is that this IS a debut…and Foux is just getting started.  If he continues with this kind of stunning quality in the structure & sound of his music – he’s going to be around and atop many a playlist in rotation out there for years and years to come.  100% excellent.

Find the brand-new Boréal EP from Foux and find out more about him at the official pages below!