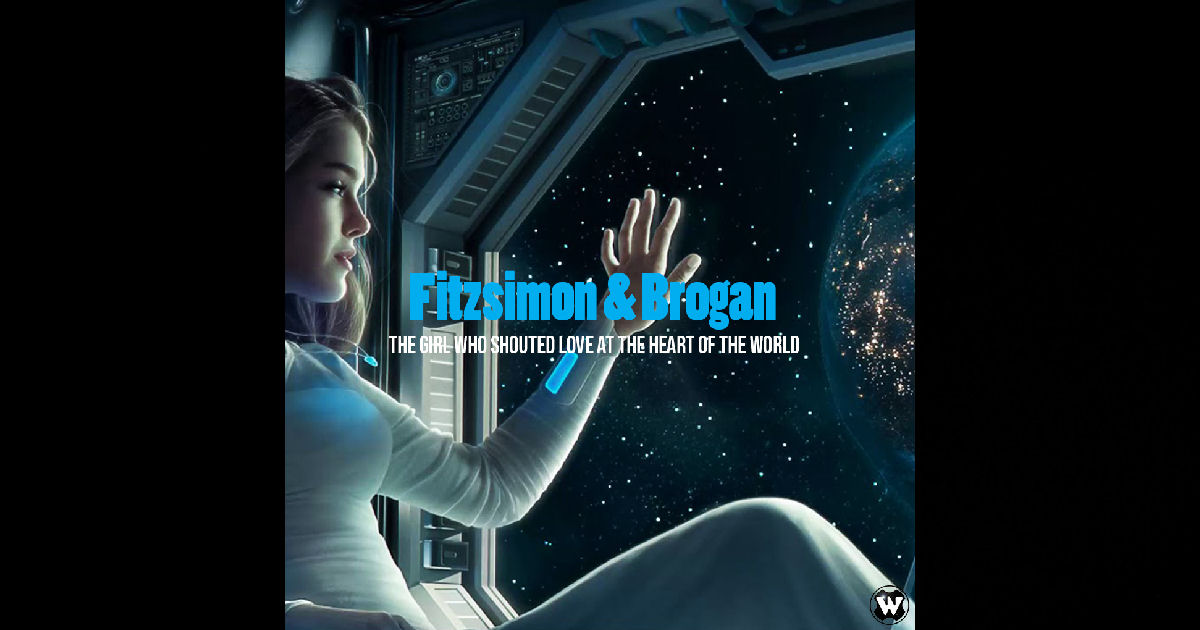 Honestly I’m not entirely sure that I’ve run into a situation yet where the title of my review ended up tripping into the second line’s worth of text – there’s a lot of words in what’s happenin’ here!

Interesting stuff happening in the band as well.  According to what I can find out there online, Neil Fitzsimon handles the guitar & songwriting, and Bee Brogan takes on the vocals, keys, drums, and engineering of their tunes…they’ve got about three album’s out there already and a new one right around the corner with The Girl Who Shouted Love At The Heart Of The World…a whole bunch of EPs and singles out there online.  And to their credit, looks like they’ve only lost one password to an old Facebook account from back in the day, and they’ve got a new one in its place to take over in its stead.  I say to their credit, because believe me, I’ve seen that situation go much more south than this example, bands/artists with ghost-accounts that range into the double-digits…and besides, who knows, maybe Fitzsimon & Brogan still have the password kickin’ around & they’re just waiting for the right time to fire it back up.  You know me & my theories by now dear readers, dear friends…not everything I say adds up.

At least outside of the actual music…on the inside of that & what’s coming through the speakers I suppose I’m at least fairly reliable, closing-in on my 2000th review here at the pages & all.  So let’s see what we can find out through three cuts from The Girl Who Shouted Love At The Heart Of The World by Fitzsimon & Brogan and experience a sample of what they’ve got in store for ya on their album this year.

Bringing the audible sunshine to your stereos, “This Is Love” definitely gets their new album started off on a positive note in a song filled to the brim with sweetness.  What I like about this song is that it goes about starting The Girl Who Shouted Love At The Heart Of The World in the right way; it’ll give you a great glimpse into what Fitzsimon & Brogan are about without giving away the full recipe right in the first song.  Arguably, “This Is Love” could even be said to carry a more commercialized sound or single-worthy direction than a lot of what you’ll find on this record, which ends up finding a really impressive Indie/Rock/Pop combination as it plays on.  Like the best way I could put it, is that I completely understand why a song like “This Is Love” ends up being one of the lead-singles put out there to entice people in to listen to the record…I mean, for sure…it’s hard to resist a sunny-side up song where you can hear the musicians & artists creating the music having a great time, which Fitzsimon & Brogan clearly are.  That being said…I could also understand the argument that “This Is Love” is a bit more surface-level than the depths you’ll find that this duo reaches into with many of the other cuts on the record – it’s a single that’s essentially designed to be the all-access pass it becomes…universal vibes & warm inviting sounds lead the way through the upbeat cadence that adorns their new album’s very first song.  Ain’t nothing wrong with that…tons of people will love what they pull off with this initial impression of The Girl Who Shouted Love At The Heart Of The World – it’s only because I’ve personally had a sneak peek at this record that I can vouch for the fact that many of these ideas & songs will run much deeper overall.  My main argument to support it as a single would be that “This Is Love,” does indeed, sound like one.  My argument for many of the other tunes would be that there’s more identity within them; I like what I hear on this first cut & I’m relatively sure that anyone out there listening would – I’m simply advocating on behalf of the uniqueness you’ll find in the other songs that might be more organic & suited to them.

Like for myself personally, I think what I was looking for from Fitzsimon & Brogan comes immediately afterwards, on “Swoon” – the second cut of the record.  Is it as much of a single as “This Is Love” is?  No.  Could it be a single in its own right still?  I’m not opposed to it…though I’d imagine this might largely appeal to people like myself addicted to the Alt-90’s/Indie sounds happening in bands like The Martinis, Echobelly, or Belly for that matter as well…those stunningly artistic twists on beautiful melodies, performed with a genuine spark…you know the ones – “Swoon” works a similar vibe perfectly.  In my personal opinion, there’s more identity to the band’s signature sound on this second tune from The Girl Who Shouted Love At The Heart Of The World – and to take that even further, I’d also happily argue that the hooks of the chorus on “Swoon” are stronger than any you’ll find on “This Is Love” beforehand.  Whether or not that makes it a ‘better’ song or not…that ain’t where I’m here to pass judgment – we all like what we like, and I like both these opening tunes, just for completely different reasons altogether.  But like…credit where credit is DUE y’all – LISTEN to the way they start “Swoon!”  The guitars from Fitzsimon are seriously freakin’ cool…and hearing this song transition from the deadly texture & tones of the opening sound in the verses into the endearing melody you’ll find in the chorus is quite impressive – to cover such a range of expressive and make it all flow as fluidly as it does is a testament to what these two can accomplish.  They even pound it out for a moment just past the two-minute mark in a bit of psychedelically-tinged wildness & give this song an avant-garde instrumental bridge of sorts, with backing vocals in there as well, but adding to the music like another instrument in the mix at that point, which is totally cool.  Ultimately, it’s the sweetness that Brogan brings to the hooks and to the microphone of this song that the people are likely to come away with remember en masse; but for you savvy listeners out there that like to get into the tunes you listen to as much as I do, you’ll find a ton here within the layers & lyrics of “Swoon” to enjoy.  Sweet tune, great sound, inventive structure & writing – and a fantastic performance from Fitzsimon & Brogan…I might only be here today to discuss a SLICE of this record for ya…but I have checked the entire thing out; no matter how many times I spun their new album, “Swoon” always stood out to me for all the right reasons.  I love this kind of Alt/Indie sound, there’s such a refreshing energy & spirit in the air on a cut like this – felt they nailed it here.

The world is built on compromise, yes?  So let’s meet halfway here.  Somewhere in between what YOU love about “This Is Love” and what I love about “Swoon,” we converge for a moment in the absolutely brilliant vibes they’ve got goin’ on with “My Soul To Keep” later on in the record’s lineup of songs.  I’d be taking a real hard look at this one as a single if I was Fitzsimon & Brogan – I really feel like this cut brought out some of their very best to the surface, shining for all to hear.  It’s got that easy-to-dig, sunny sound, and brightness like you’d find in the demeanor of “This Is Love,” but with the organic feel to it that comes through the sincerity of the way they approached “Swoon” so impressively.  So like I’ve been saying – you get the best of both worlds when it comes to this tune; the energy is absolutely fantastic, the performances you’ll find are truly some of the best you’ll find on the record all-around.  Listening to the confident way they charge through this gentle & tender melody with such strength is awesome, straight-up.  The guitars from Fitzsimon have an incredibly inviting sound, especially when he goes note-for-note on the exits from the chorus – that’s real magic right there and outstanding musicianship.  Brogan almost seems like she almost can’t refrain from being amazing…I’m pretty sure it’s just fully built into her character – she brings an exceptional amount of charm & charisma to “My Soul To Keep” that you can’t take your ears off of.  But if the case is that “This Is Love” is like the all-access pass I’ve claimed and believe it IS – then a song like “My Soul To Keep” goes even further beyond – it’s like Fitzsimon & Brogan bring the party right to you instead this time around.  In my humble opinion, there’s a magic in “My Soul To Keep” that’s all to themselves…you could hand this tune to a million other artists/bands out there & never come back with a recording that sounds as invested & inspired as what they’ve got here.  Beautifully & professionally performed from beginning to end – I’m absolutely in love with this song.

The Girl Who Shouted Love At The Heart Of The World will reveal a ton of passion, heart, sweetness, melodic-rock, and wonderful Indie-style sentiment displayed throughout what ends up being quite a versatile record all-around when it comes to the widespread sound it has.  To name a few others real quick here before this finishes up…  ”This Girl” comes out with extraordinary sweetness in the melody – it’s just straight-up gorgeous from beginning to end, with just enough of that Alt/Indie edge to give it that depth & artistic appeal to make it perfectly complete.  “Screamersville” is a blissfully expressive & colorful tune where you’ll find Brogan getting right into the moment in all kinds of unique ways, often catching onto an exceptional melody to pump the heart of this tune loudly’n’proudly…love the way they shift into the chorus of this cut.  Overall, a track like “Screamersville” would be like perfect cross between a band like Echobelly and The Pretenders…lots of great tones, melody, and ideas throughout this tune and a whole lot of style & confidence in the execution that ears would be sure to appreciate.  “Devil’s Dictionary” also has some of the most powerful moments you’ll find on the entire record as well – when it comes to choruses, they crushed this one and found its maximum potential for sure – it’s like the peak power of the energy/melody combination that Fitzsimon & Brogan create, perfectly controlled.

I’ve had a great time checking out The Girl Who Shouted Love At The Heart Of The World and listening to what Fitzsimon & Brogan bring to their music…they play these songs with a lot of heart & genuine passion.  And after everything you’ve read here…pretty safe to say it’s a record you’re certain to find something you like, or something you love from – you gotta dig those odds.

Find out more about Fitzsimon & Brogan from their official homepage at:  https://www.fitzsimonandbrogan.com

Tags: Fitzsimon & Brogan Singles sleepingbagstudios The Girl Who Shouted Love At The Heart Of The World