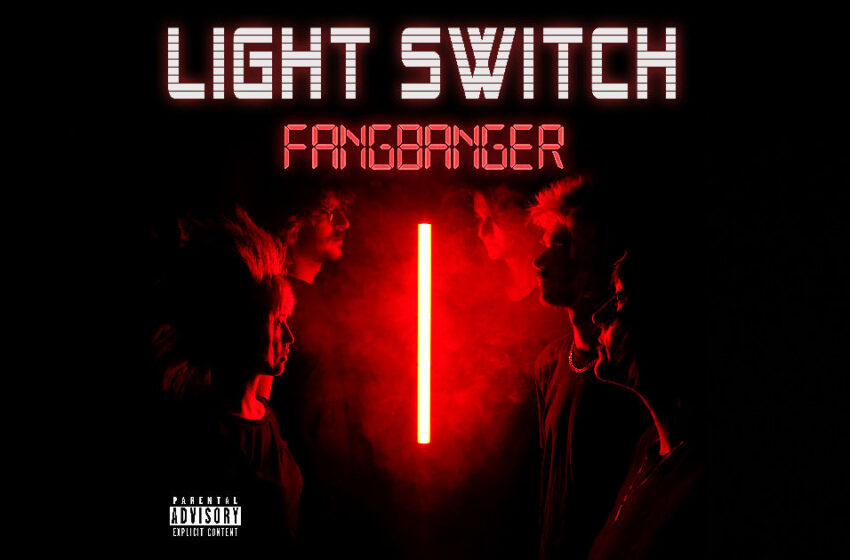 Well would ya look at that…talk about spoiler alerts, bringing up “Light Switch” by Fangbanger at Spotify reveals a whole plethora of Emo/Punk/Alternative lists where you can find their music posted up online.  So I guess we know what we’re in-store for here, long before even pushing play…and if that didn’t clue ya in somehow, I’m sure their band pictures would suffice in doing that too.  Colored hair, lots of leather, mascara & whatnot…I mean…Iain’t stereotyping here – I’m just saying it’s pretty obvious that they ain’t rocking Country/Folk, you feeling me?

Looks like this five-piece band based out of Los Angeles has been plenty busy since about 2020 or so.  The same band that brought you such incredible titles as “Once A Catholic, Always A Masochist” and “I Love Huffing Paint” from last year, are back in action with their second single of 2022, called “Light Switch.”  For fans of Alt/Punk/Emo & whatnot…I’d imagine you’ll have no problem digging their latest cut…”Light Switch” is loaded with the theatrics and dynamics you wanna hear in that kind of crossover sound.  Lots of that good-good stop/start energy that allows the band to reveal the punch in what they create, springing off the beat with pure power and attitude that is guaranteed to get noticed by all of ya.

It checks out…I’m not detecting any real weak points to pick on…Fangbanger plays with a genuinely unified vibe, and I’d reckon that’s their biggest attribute contributing to their success.  The regularly rack up tens of thousands of hits on Spotify alone, if not hundreds of thousands – so who would I be to knock the recipe they’ve got for cookin’ up tasty new tunes for ya?  “Light Switch” might not be the most unique of all tracks you’re gonna hear this year, but not every song needs to be that – to me, this single was way more about turning up the amplifiers, rocking the fuck out, and releasing some of that energy they’ve got through your speakers.  It’s fairly tried, tested, and true in that regard, but the flipside of that coin would be to say that “Light Switch” has everything it needs too…definitely ain’t nothing wrong with that.  As I’ve said many times throughout the years, we don’t all need to recreate the wheel, and a flawless tune is always seriously commendable in any genre; I ain’t hearing anything I’d change on “Light Switch” and I’m impressed by the tightness they put into this cut together from every angle.  I think what I like perhaps more than anything else is that it was genuinely hard to pick out any specific aspect of this song that stood out beyond the rest…there’s a balance of strengths in Fangbanger that sounds audibly complete, and equally satisfying.  They’ve got that live-wire franticness down to a science, and can flip the switch at any time they choose into a perfectly controlled chaos of their own design – like I said, it’s the unity they display that continually remains the most impressive part of listening to them.

So…while you’ll find no complaints from me here, I think it’s also just as true that Fangbanger’s best years are still ahead of them.  “Light Switch” is more than proof that they’ve got all the right pieces in place to rock a track with power and gripping performances – now it’s all about tapping into what’ll make them even more unique and separate them from the rest of what’s out there, if that’s what they wanna do, of course.  In terms of being able to write a track and execute with fierce precision though, they’ve proven they’re more than capable with “Light Switch” – and the main hooks they’ve got blastin’ through both the music & the microphone are pretty much guaranteed to be a hit with y’all listening.  I feel like the ferocious power they generate in “Light Switch” hints at an even more nuclear & explosive sound in the making…and in that respect, I’m truly excited to hear where Fangbanger will continue to take their music from here on in.  In what’s still quite early on into their career, they indisputably prove they’ve got everything it takes to be a force to be reckoned with in this scene of ours – you can hear it in the sheer sonic punch they put into the stops and chops they reveal throughout “Light Switch” for sure.

They’ve put the effort into their performance and made sure that when it was time to push record, they were more than ready – and beyond that, “Light Switch” sounds like it would be even more of a killer cut live from the stage.  Solid players, reliable band – Fangbanger is clearly into what they create and are executing at a high level early on…there’s no need to worry about a crew like this finding their way out there when it’s crystal clear from everything you’ll hear that they will, and go on to even bigger things over the years to come as they conquer the scene, kicking out the jams & all the available ass as they do.

Find out more about Fangbanger from the official pages below!