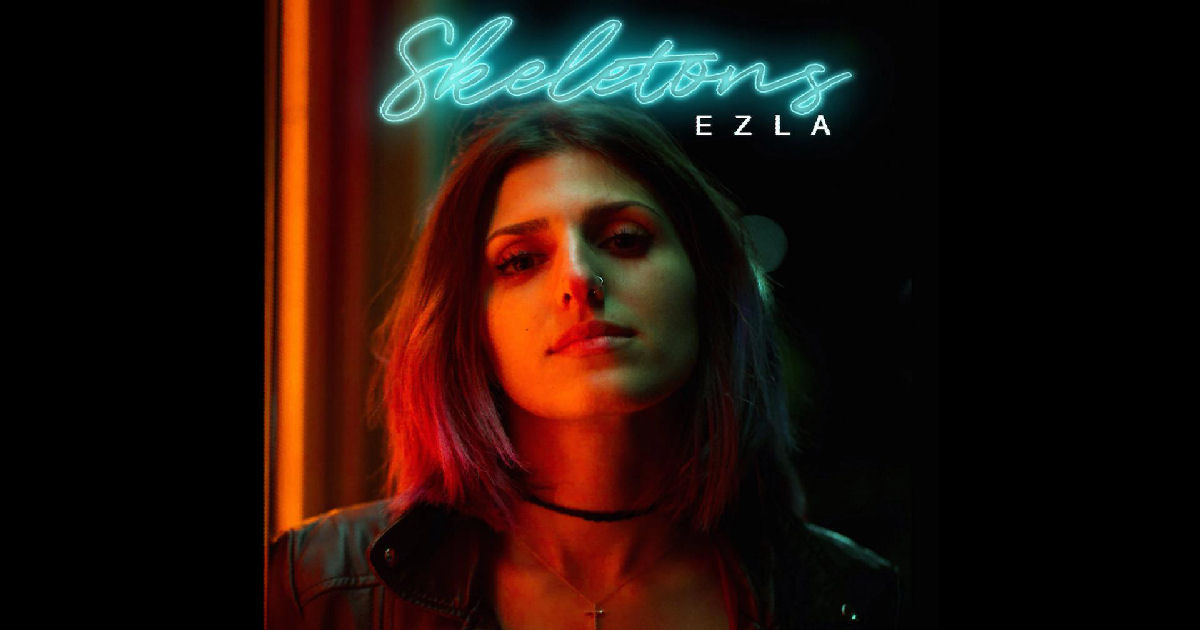 If you check into Ezla’s social-media out there, you’ve already read about how she went on to outperform all expectations in 2017 after releasing her debut single/title-track from her upcoming record called “Outcasts.”  We reviewed that cut here with the same amount of glowing enthusiasm that she was essentially met with worldwide; and as a result of her efforts on that stunning debut cut, Ezla went on to exceed all of the projections, wishes and hopes she had for her music as the people out there responded with tons of listens and mad love & support for her style, sound & approach.

Well earned & well deserved…Ezla’s quite a fearless entertainer when it comes right down to it.  And as far as her new single “Skeletons” is concerned – which is officially being released on February 2nd, 2018 – I hear no reasons as to why she wouldn’t have another huge hit on her hands as she makes her way towards her Outcasts EP with this second vivacious audio enticement from the upcoming record.

I’ll admit…the first couple times through that main hook of the chorus, I had no idea what Ezla was saying…it took me a second to figure it out (which is on me, I’m getting old) and once I did, I fell in love with it.  She’s written a truly brilliant line to form the chorus and main hooks of “Skeletons” – the kind of line so good that you kind of smack your head in wonder at how you’ve never heard it before…like you’d figure someone out there would have written that one by now.  But nope – this is all her own; it’s highly effective, rhythmically spot-on and just as catchy as it is extremely clever.  Starting out the song with those chorus hooks actually set the stage for the attitude in the lyrics to follow that take Ezla’s personality more boldly into the spotlight on this second dose of what she’s got planned for us all on Outcasts.  She’s got menace and mayhem swirling through the atmosphere and mood of “Skeletons” – and once again, she’s providing wicked entertainment through her electro-pop energy in the music.  As we’d expect after hearing “Outcasts” back in 2017, she’s still sounding incredibly focused at every moment and right into it all – which makes an incredible difference dear readers, dear friends – the results speak for themselves when you hear Ezla give another flawless performance on “Skeletons.”

It’s current, it’s club, it’s all executed with brilliant editing & production to assist what’s already going perfectly right for Ezla, but you gotta dig that digital-edge that comes along with the sound of “Skeletons” and the smart way that the dynamics have been arranged for maximum power and impact.  The edge isn’t just a digital one when it comes to this new single – you can hear the edge in Ezla’s voice as she mixes in a sultry style with a deadly attitude in a lethal combination of lyrics & vocals that really fit the idea and atmosphere surrounding her.  “Skeletons” indisputably has a ‘now sound’ and that’s going to work incredibly well in Ezla’s favor as she continues to get her name out there to the people.

No complaints from me and I can’t imagine anyone else having any either.  Highlight moment?  There are many truthfully…I think she’s done a great job in all areas and created something that a ton of people are going to jam out on relentlessly; but if you forced me to choose, I suppose I’d have to say it’s right around the two-minute mark when you’re well into this idea and Ezla takes it all further by adding an even bolder sound to her performance, raising the stakes yet again.  Really smart backing layer of electrified-vocals complements what she’s doing there perfectly if you listen closely as well…it can often be tough to take your ears off the main star of this song, but if you can, you’ll notice all kinds of awesomeness happening in the depths of the music & production of “Skeletons.”

All-in-all though, like I said, no complaints from me.  I think Ezla makes an extremely relevant sound for today’s current music-scene and still adds enough to it to have it progressing forward through her style & songwriting.  She’s clearly got a lot to offer the here & now of music – and she’s confirmed that with resounding confidence & authority on the highly vibrant sounds of her new cut “Skeletons,” giving you another audible reason to be stoked about and excited for the release of her upcoming record.