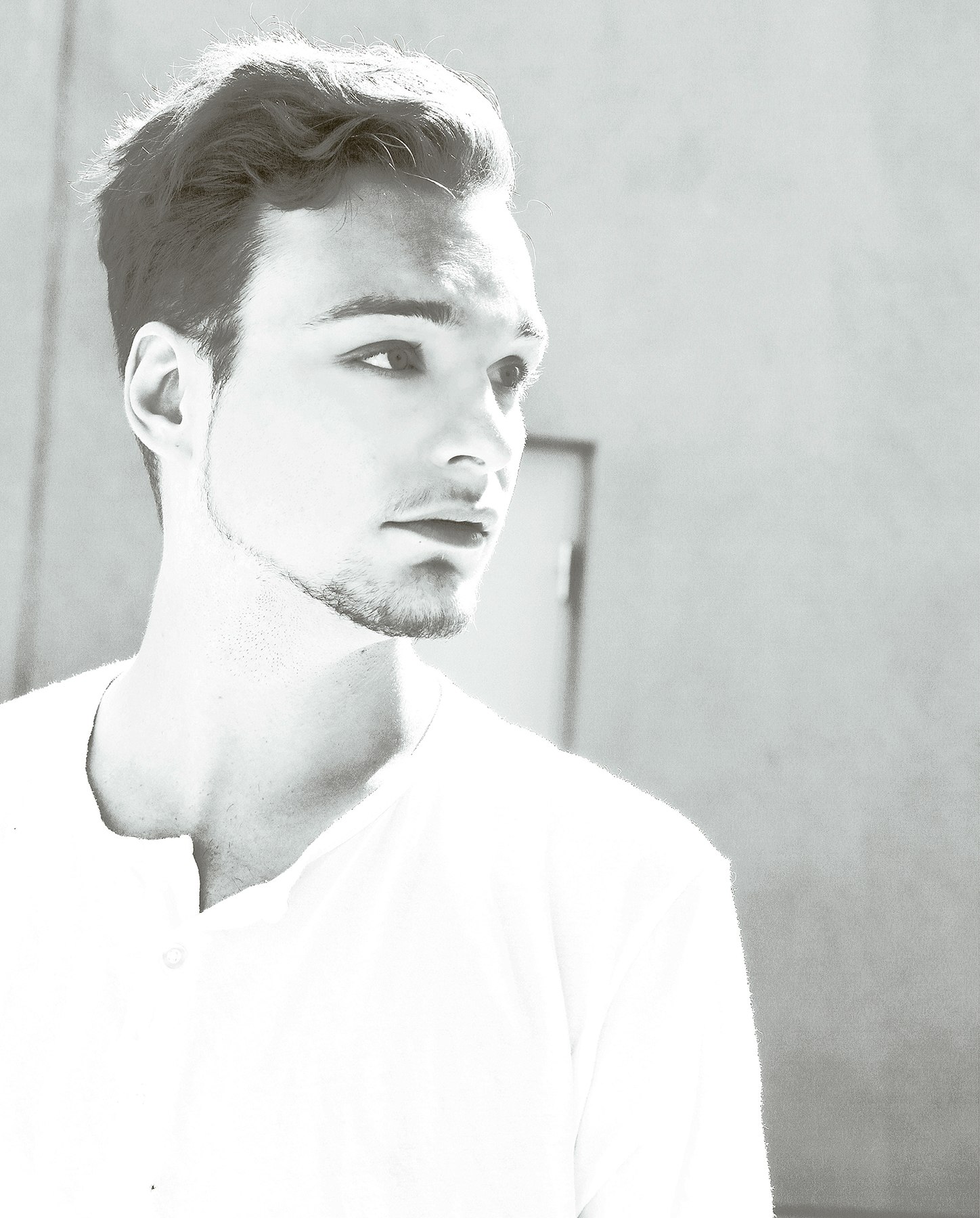 Gotta say it was an extreme pleasure to talk to Kristoffer Szczerbicki of Eyes Like Oceans.  In a somewhat rare occurrence here on our pages I found out doing my research and briefly chatting with KS that he was formerly in the band Amy’s Ashes – a band I not only knew of but still occasionally listen to.  So those of you out there that already know what I’m like – you got it, I was beyond stoked to talk to a musician & singer/songwriter like this that puts such convincing power & emotion into his music.  I did however, have to confess to most-likely stealing his music; and how that plays out here…you’ll have to read for yourselves.  For now, I’ll leave it as simply as letting you know that Kristoffer is a truly genuine guy, a real pleasure to talk to and an artist that approaches his music and career in all kinds of ways I respect.

SBS:  First of all Kristoffer, I just want to say a huge thank-you and tell you personally what an extreme privilege it is to have you take a couple moments for us. I’m extremely familiar with your previous work in Amy’s Ashes and the album Heart Control – but you’ve come to us now in a new solo-project that you’ve taken on, Eyes Like Oceans. Can you tell us from your perspective what separates the two, or what you feel the difference between these two sounds you’ve created will be like for those about to listen to your new work in Eyes Like Oceans?

Kristoffer:  Thank you for having me, kind sir.

Well, Amy’s Ashes had a more specific and explosive sound. With EOL I’m trying to not to stick to a specific genre. I just write whatever comes to heart, and the songs I’ve written and recorded demos of so far have influences from a lot of different genres and artists. That’s really exciting for me because that means I can appeal to a wider audience without selling out, and live-shows will be a blast.

SBS:  What prompted the beginning of Eyes Like Oceans? I don’t see that Amy’s Ashes have packed it in or called it quits…so what led you to a new solo-project? Was there something that you feel like you needed to express that you’re unable to within the scope of music in Amy’s Ashes?

Kristoffer:  I’ve actually had a solo-project for years called ‘On The Roof’ but I didn’t like the name and people mostly knew about me because of a hallelujah parody I did called ‘The Marijuana Song’, so I wanted to start over, kind of. There were actually a lot of things, both lyrically and instrumentally, that were hard to do in Amy’s Ashes. Not that I felt limited in AA.

Not at all, I learned so much from writing and recording with Erik Escalier (guitarist, beats, best friend) that I’ve been able to bring into my solo stuff.

SBS:  I have to confess Kristoffer…I mean, you already know I’m a fan…but…well…in truth, I’m not sure how I got your album Heart Control from Amy’s Ashes. My theory is a pretty simple one; I’m an unrelenting music-pirate…I am almost 100% positive I’ve literally STOLEN your music, as per the definition. Some file-sharing program of some sort I’m sure. Anyhow…I’m willing to admit that. I’m also willing to say, that had Amy’s Ashes toured through Canada, I most assuredly would have gone. Probably would have bought a T-shirt. Based on all the information you have here…what’s your opinion on the end result? Is there some sort of a tangible benefit you can see coming from people finding and obtaining the music for free?

Kristoffer:  I don’t mind that at all, to be honest. I’m happy aslong as people listen to my music.  I don’t mind pirating music, cause you barely make anything out of it anyway. But people should always try to support by buying merch and going to shows. Being a musician costs A LOT of money.

SBS:  I was always very impressed by the passionate and frantically-emotional nature of your vocals in Amy’s Ashes. What’s important to you when hearing your own vocals come back to you the first time after a recording session? How do you know when you’ve personally nailed it exactly how you want it to sound?

Kristoffer:  Hmm, tough question. I guess the most important thing is that it feels like I really mean what I sing. Especially after hours of tracking vocals on the same day.

SBS:  You also put a lot of power & heart into those vocals & lyrics, which I think is something that is audibly tangible to anyone that would listen I’m sure – who inspired you through lyrics and vocals while you were first discovering your own talent and who continues to inspire you today?

Kristoffer:  My big idol when I was a teenager was Joakim Jensen from (Social Siberia). I can’t deny that he’s probably the biggest inspiration I’ve ever had. But there’s a looooot more bands that have inspired me throughout the years. Some that come to mind would be LIGHTS, Fall Out Boy, Paramore, Justin Timberlake and Sonny Moore.

SBS:  Aside from experience-gained on stage and in the studio – did you feel like you had an advantage coming into making music in Eyes Like Oceans after coming from Amy’s Ashes? Conversely, were there any disadvantages in being an established band and then taking on a solo project?

Kristoffer:  Yes, I learned so much from being in Amy’s Ashes. Not only musically and in the business aspect of music, but I grew as a person too. So I felt more confident starting ELO.

SBS:  Kristoffer, as wide open of a question here as you want to make it; tell me FIVE things you know to be 100% true about music.

Kristoffer:  It saves lives. It’s always there for you (unless you forgot to charge your phone).  It always continues to change and evolve. There’s no bad genre, all genres have both good and bad music. Music is one hell of a drug.

SBS:  You seem to like to write from a truly internalized point of view – can you describe the mindset you find yourself typically writing in? Moments before you begin to make music or create something new…what are those things that trigger you and lead to a song being put together?

Kristoffer:  To be honest, my songwriting is so chaotic I sometimes feel like giving up during a song. I’m still trying to come up with a solid system that works for me, haha!

SBS:  What excites you most about the new music you’re making in Eyes Like Ocean? It sounds as if this was somewhat of a personal journey to get this music out at all…so there must be something inside you that continued to drive you forward and want to get this music out. What kept you going throughout the beginnings of this idea…what made it all seem possible? What made it necessary for you…and again – what excites you the most about it now?

Kristoffer:  Performing it live excites me the most. That’s the thing that’s always driven me. I may not be the most solid performer or musician, but no matter how nervous or shit I feel – there’s nothing that beats the feeling I get on stage.

SBS:  Did you find in making the music solo that you were able to handle all the aspects alone without any issues? Would you possibly expand the Eyes Like Oceans line-up in the future to add additional sounds, musicianship, diversity….any reason really I suppose…or do you plan to keep this as a solo project for yourself and preserve that 100% freedom of expression? It’s always a tough choice…but I suppose the real question is, have you set any limitations for what Eyes Like Oceans will or won’t be over time this early on?

Kristoffer:  Doing things alone is really hard actually, but I think I’ve been doing a good job so far.

I will be announcing a new member that will be playing guitar soon, and aside from that I’ll have a full live-band at some shows. No limitations, I will be 100% focused on pushing ELO forward during 2015.

SBS:  Where’s the best place for people to find out about the new Eyes Like Oceans project and hear the new tunes? What’s in the upcoming future plans?

Kristoffer:  Liking us on Facebook is probably the best. We’re recording an EP and will be releasing a really, really good single soon. We’re also playing some shows.

SBS:  You’ve reached the end! The SBS ‘Open-Floor’ where you can say anything you’d like to or thank any distant relatives you haven’t seen for a while! Thank you so much for your time Kristoffer – again, it’s been a real honour and we’re proud to have you on our pages. All the best!

Kristoffer: I want to thank my mom for always being there for me, doing everything she can to help me reach my dreams and always making me feel loved. Also thank you for letting me move back home, haha!