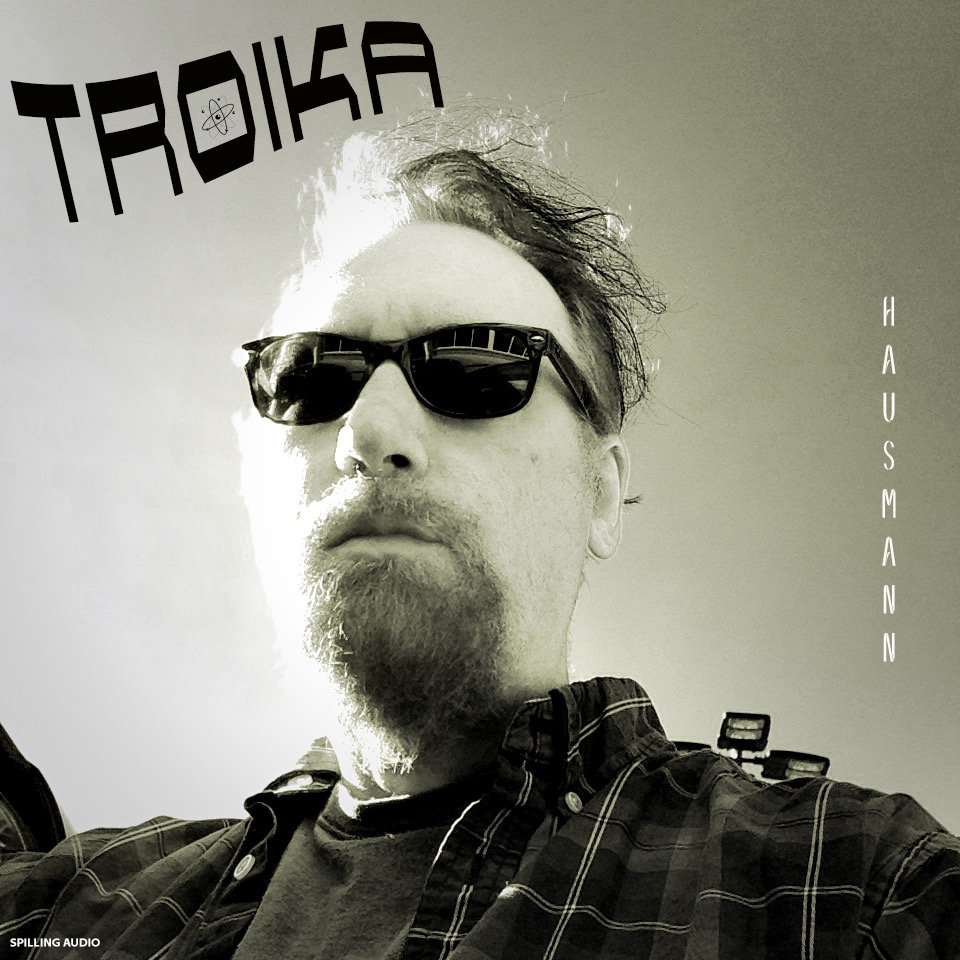 Multi-instrumentalist Eric Hausmann gets his groove on right away on his latest EP Troika with the opening song “School Haus” full of rhythm and energy as it winds and twists from beginning to end.  This track peaked my interest early; in some ways you can hear it partly belongs to the era of guitar-wizardry…and in others fits more in line with modern-day music.  It would be hard to tell from “School Haus” alone which side of that fence he truly sits on – I have the feeling that he’s been raised right when it comes to music, the EP’s full length and three-songs reveal that there’s quite a lot going on with Hausmann and his multi-dimensional material…but maybe there could be even more…

As much as I liked the structure and sound of “School Haus” – there was a nagging suspicion that wouldn’t leave me…something was telling me there was more to offer here than what I was hearing.  I like the groove & grind of “School Haus” and how it reminded me a lot of the short excursions into rhythm you can often find on a Satriani or Vai album surrounding their 9-10 minute epics – but I wasn’t sure that any one part had enough in it to really separate or define Hausmann in a way we’d be able to recognize and identify as his own.  It can certainly be done in instrumental music, it’s just a lot harder to find your…well…your voice, if you will.  Of course I’m not suggesting that the voice needs to necessarily even come from your face…but that strength in a presence or style that can truly be defined as one’s own.  It was hard to picture that happening over the course of “School Haus” – but I dig the song.  It’s got energy and rumble…but you can also hear in the tones that this could either make the absolute most killer opening to an 80’s movie out there…there’s funk, rock, groove for miles…clever breakdowns and a real energetic line/riff it comes back to…the roaring distortion of the guitar sounds great in tone but simplified in the writing – part of me enjoyed the sound, the other half of me wanted more from Eric.

Right away from the tones in the atmosphere of “Eight Days Out” I feel like he started to give us the ‘more’ I was looking for.  Don’t get me wrong…in many ways, “Eight Days Out” keeps itself fairly uncomplicated too – but there’s a real intensity in this song even at what feels like it’s all moving at a slower pace.  Let’s not forget – he’s doing this all on his own…and in doing so, any one of us out there would have our strengths and weaknesses – but in like many of those cases including my own, the strengths and weaknesses can truly be that we DO all of this by ourselves.  Sometimes in doing that we trade a bit of skill for the overall vision…we trade musicianship for further control and play parts we can play as opposed to what could have existed in its stead.  I didn’t feel like “Eight Days Out” really had too many weak points…I really like the atmosphere and building of the song’s texture & tones – that bass-line is superb as well.  The switches into the ‘chorus’ were great…additional elements swirl into the mix and the whole song becomes quite exploratory from where it all began.  The synth-strings sound great and the beat shifts solidly around while Eric switches from part to part; not sure if I’m crazy, but I hear a slight saxophone in the music at times…it might just be the way the sound collides together but the point is that the atmosphere contains many ingredients to make up its chilled-out vibe – and when he wants to turn up the heat on “Eight Days Out,” he does.  This particular cut reminded me a lot of bands like Minus The Bear also minus the words or the instrumentals of The Samuel Jackson Five.  I think Eric plays it smart overall by not overstretching the ideas too much…”Eight Days Out” I felt shifted around just enough through its twists and turns to keep it vibrant and interesting to our ears; he doesn’t overcomplicate and he plays well inside the framework of his ideas & ambitions.

“A Dead Land” was a little more dismal in its nature, texture and tone…a lot more melancholy in its attitude and sound and arguably the more experimental of the three.  Again – commend this guy for being able to put this all together on his own…in my honest opinion there is nothing cooler in the world than being able to pull off full-structures and songs by yourself, know what I mean?  Every one of these tunes from beginning to end have rested on his shoulders…and while I might not think it’s gonna all head out there and set the world on fire – I think he’s done a noteworthy job of making this happen all on his own.  Whatever sound you’re hearing, it’s because he put it there – and there’s something really extraordinary about being able to pull-off multiple parts together into one cohesive idea.  Besides all that…if I was to hear many of the instrumental bands or artists out there, my opinion would probably be the same…it’s good stuff, but chances are it’s still not going to set the world on fire.

But that’s OK though!  It’s okay for me, it’s okay for you and it’s okay for Eric!  There are so many potential uses for music like he’s making from soundtracks to television-scores and all-kinds of different projects, commercials, ads, presentations…you name it and the opportunity for songs like you’ve heard on the Troika EP exist.  I think tracks like “A Dead Land” really speak to his capabilities of creating soundscapes and songs that could really potentially fit into so many different facets of the music-industry.  It’s really up to Eric on where he wants to take it all to next…what he wants this music to do.  I think he’ll continue to build his skillset up, I think the depth and level of writing will increase even further over time as he unlocks his creativity and new-ideas with every step he makes.  There’s solid promise and potential all over the writing of Troika…and with a little time and experience, I have no doubt that Eric will tap right into that and fully emerge with tunes that are even more creative and wild than the ones he’s already making.

Find out more about Eric Hausmann at his official Facebook page:  https://www.facebook.com/erichausmann