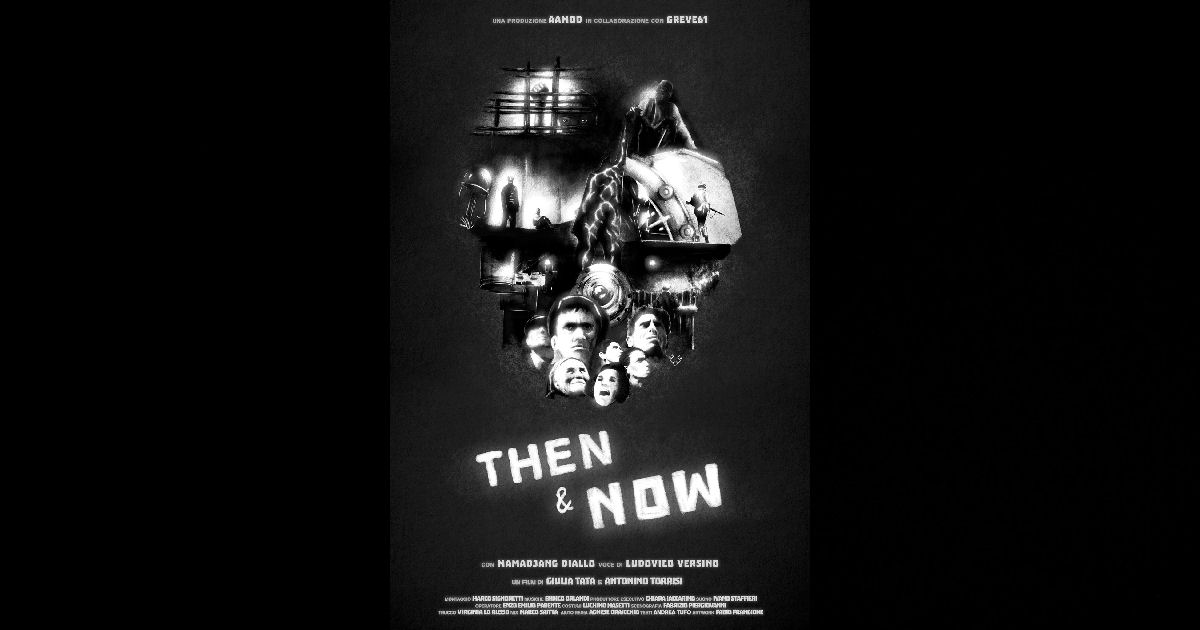 Really rad stuff to be found throughout the soundtrack for the short film Then & Now, composed & constructed from the mind of artist Enrico Orlandi – this dude’s done an excellent job of putting together a magnificent amount of sound together and creating a completely defined atmosphere.  I’m just here to give ya a taste of what it’s like through this review, but suffice it to say that, a short film usually comes along with a short soundtrack…there are eight songs on this one and I’ve certainly made time for them all throughout the week.  Enrico has an exquisite ear for sound and his ideas are sincerely spectacular to listen to; all inspired by the Sci-Fi-based Then & Now, it gives him the opportunity to create his own atmosphere, mood, tone, & vibe, blending impressive instrumentation with eerie sounds.  Then & Now has a dystopian setting in the film – and the sound of its soundtrack perfectly mimics that.

Opening with the title-theme, “Then & Now” does a wicked job of creating immediate tension & suspense… often creepy, instrumentation and orchestral arrangements heighten the drama and mystery in the music throughout the gentle flow of this soundtrack’s first cut.  Enrico flexes mad skills here with how tightly woven this idea is, it’s a great display of control and how to expand sound in a way that draws us in to listen…it might be less than two-minutes long, but the amount of curious sounds packed into this title-track is noteworthy.  I always love piano in a setting like this, and it’s a truly fantastic element in the haunting melody that floats like a dream-sequence through this song, and many others that you’ll find on Then & Now…Enrico uses this instrument brilliantly as one of his main assets.  Combined with smart elements like the stormy weather and ambience you can hear as “Then & Now” begins, the amazing patience Enrico has and his smart use of space…he sets the mood for what’s to come with this mysterious title-track…it audibly sounds like you should expect the unexpected.

You’ll hear how even shorter ideas like “Since They Arrived” would make for excellent soundtrack material along the way…but I’ll admit, the first track that made me raise my head up to scan for the title so I wouldn’t forget, was “Dangerous Technologies.”  This…THIS…is exactly what you want in a score right here – the range & distance that this song travels, again, in just ninety-five short seconds, is remarkable – talk about a sonic adventure!  You’ll go from the ominous vibes of the first thirty-five seconds and then within a single transition, you’ll be transported straight into the deep dark and the grip of suspenseful, straight-up bone-chilling sound.  The impact of that main transition is as bold as it is impressive to the ears – you couldn’t possibly listen to this song and not notice how dramatically things immediately change and how all of a sudden it feels like danger is absolutely everywhere around you.  Extremely well laid-out, perfectly performed & arranged…”Dangerous Technologies” is gripping from its first murky moment to the looming shadows that continually grow to menacing heights at the end.

Sound comes at you in waves throughout “The Arrest” to follow…another excellent combination of violins, strings, cellos, drums, and odd uneasiness creeping into the mix as Enrico haunts your speakers yet again.  Triumphant sounds are mixed with purpose and a mission on “Return To The Surface,” which shifts into an effectively empowered vibe…like that pivotal moment in a movie where you can hear the tides are potentially turning, but that danger is still present.  Within just a minute’s time, Enrico creates a tune that ultimately ends in a severely hopeful sound…I really like “Return To The Surface” and the dramatic shift that occurs, which also leads perfectly into “Rebellion” to follow.  “Rebellion” will also show a large degree of flexibility, shedding light into Enrico’s soundtrack like never before with the beautifully uplifting melody & energy that surge throughout this song, and its delicate piano ending was an audibly smart & serene way to end it on one last gorgeous note of thought-provoking sound.  Even more curious, “The Loop Closes” goes all-out ambient & puts a remarkably minimalist idea to great use.

If you like some of it, I guarantee you’ll like all of it – Enrico’s a true pro and he’s created a really cohesive thread that runs uniquely through this soundtrack that ties the atmosphere & vibe together tightly…he creates an experience in sound that even without having seen the movie, you can easily tell would be a perfect complement to onscreen visuals and scripted scenes.  And of course, what would a movie or soundtrack score be without its “End Credits” right?  Enrico does a great job of this final tune…it might just be me, but I’ve always looked at the “End Credits” instrumental at the end of any movie to be like, I guess a final summation or conclusion somehow…and I really felt like you get that here on Orlandi’s last song of Then & Now.  I’m always looking for a reminder of the journey & experience we’ve just been a part of at this point, and Enrico definitely delivered; the music loops around to a variation of the piano melody that opened the soundtrack to start, creating an infinite experience to be repeated – and once you check out the film too, you’ll know exactly why that is.  Awesome stuff all-around, highly focused, gripping sounds, really well composed & arranged – I’d be willing to vouch for this guy’s exceptional ideas & music any time, Enrico’s got tremendous talent.

Find out more about Enrico Orlandi at his official website at:  https://www.enricoorlandimusic.com