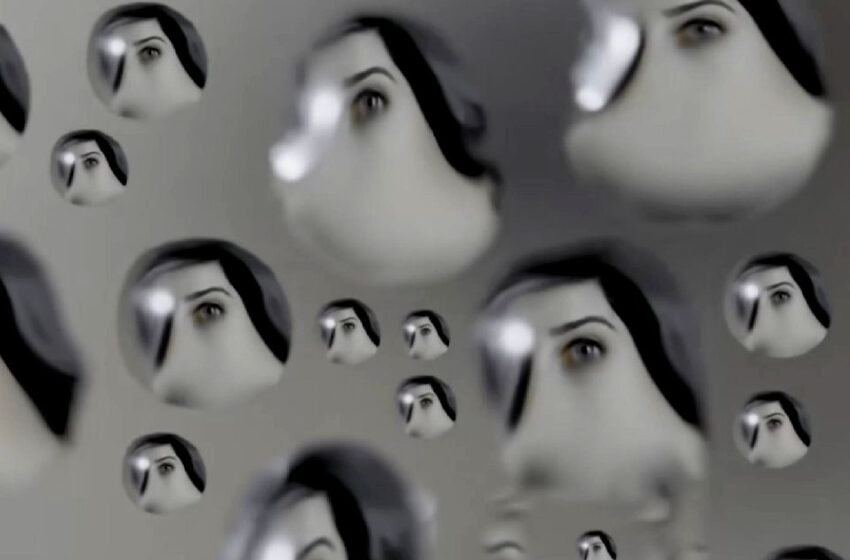 It seems to be a fifty/fifty split over whether or not it’s Em or EM…in which case, it’s dealer’s choice.

I’m also not the guy who’s afraid to admit when a concept goes flyin’ right over my head.  Don’t get me wrong – I like what I hear in EM’s music quite a bit when it comes right down to it – but as to what the real tie-in to 19th century Russia is on “Hear Your Love” is entirely lost on me.  You can see the numbers on this website of ours and how much music I’ve reviewed overall…I mean…this ain’t my first rodeo – the concern of course being that if it’s lost on me, it’s gonna be a tough concept to connect for others as well; I never claim to be the sharpest knife in the drawer, but I do know my way around music fairly well.  I get where she’s going with the idea…I’m just thinking it needs a whole lot of context outside of the song itself to bring it all together for the people out there – it’s much tougher to appreciate a 19th century influence on material & music that sounds made for the modern day, including lines like “baby, baby another beat ayo” with such modern language as well, you know what I mean?  I ain’t knocking the influence itself, I’m not disparaging where EM chooses to pull her inspirations from either – but I am saying the concept itself needs a bit more clarity if we’re going to be able to connect all the pieces on our own without it all being explained outright.  Ultimately, I see a bit of confusion in terms of how to go about promoting EM’s music at work here between what I’ve outlined already and the fact that she seems to end up in the Adult Contemporary section all the time.  I think there’s a lot more to her than that one genre would have people assuming…and I also tend to feel like the AC genre is where far too many artists end up being put out to pasture…I don’t think there’s ever been a time where I haven’t advised against that for the artists & bands out there.  It’s a label that applies enough to make it work with the music EM’s making I suppose…but it’s also a genre that carries a ton of weight to it, instantly invoking that feeling like you’re about to be listening to the music your parents would like.  And hey, maybe they will too…that’s always a possibility…but it’s important to understand how the people out there perceive that label before they even have the opportunity to push play – it can work against you.

BEYOND all that stuff…some of which is irrelevant to the actual core of the art itself…labels & genres & such, which I don’t put much stock into anyway – I do really like what I hear in EM and fully dig the sound she’s got goin’ on if I’m being entirely honest with ya.  I think she’s got a tremendously beautiful voice – I love the fact that she IS thinking about her music & the different places she can go to for inspiration & whatnot…she’s somewhat digging into the concept of past-lives & loves for the words she’s put into “Hear Your Love” and there are a lot of positives to be found in that regard.  She’s looking to help restore The Age Of Innocence with her music…and, sure, why not?  Chivalry & romance & all that good stuff – we’d be foolish as listeners not to welcome such sweet sentiment with open arms & open ears – I do think if that’s the main goal then EM is going to want to make that more clear through the music & the lyricism, and of course if it’s not, then there’s even more work still yet to be done in switching things up in terms of how to get these songs out there into the world.  Because here’s the thing folks…the real nitty gritty of the entire situation…and words she could write, anything I could say here in review…all that stuff is really just background noise when you have music like this that easily sells itself to our ears.  For real – a single spin through “Hear Your Love” was more than confirmation of EM’s talent, her stellar instincts on how to both write & execute a memorable hook, and there’s no confusion whatsoever around whether or not she’s got a song that’ll appeal to a ton of people out there with such accessible sound – has all of these things in place.  In fact, I’d go as far as to say I’d guarantee that if you were to listen yourself, you’d probably instantly like or even love what EM creates and comes up with on “Hear Your Love” – I think it’s got that high of a degree of universal appeal to it, and I don’t think you could have put in a better performance than exactly what you’ll find she puts into this melody.  It really comes down to what kind of artist EM wants to be, what level of focus she wants to display in her songwriting, and then of course the entire relationship that has to how she’s marketing her music.  For example – as a song…clean slate, no rules, no limitations, no influence – I’d put this right up there with some of the tightest & best soulful Pop songs I’ve heard this year – but if it’s more about writing within a specific concept like she’s outlined, then I end up with an entirely different opinion altogether.

Or perhaps a better example would be the second single I’ve got in review here, called “Say What You Mean.”  On a conceptual level – especially when you factor in the video & the symbolism that EM has used – this track is the kind of song where the message & meanings couldn’t possibly be lost on people, you following me?  Again…all this really boils down to EM herself and what she wants to do as an artist & the kind of career she wants to have.  Do I think “Say What You Mean” is a better song than “Hear Your Love?”  Not necessarily, but it depends on your definition.  I would tell “Hear Your Love” is a more accessible & single-worthy song without much hesitation, but I’d also go down fighting tooth & nail that the writing of “Say What You Mean” from the concept on up is much more complete & cohesive.  So for myself personally, that’s the kind of stuff that moves me…I can both hear & see the focus of EM at her best throughout the devastating words, mood, and emotions that fill the atmosphere of “Say What You Mean” – she’s done such an exceptional job in fact, that the entire song is every bit as remarkably gorgeous as it is extremely gut-wrenching through the twists & turns of this tale of love.  The bottom line is you feel that connection between theme & the words in a superbly sensory way, and equally EM’s connection to this moment in time.  Is “Say What You Mean” Adult Contemporary?  No more and no less than you’d feel like what you heard on “Hear Your Love” was or wasn’t…and no less suited for a different category like Soul, Pop, R&B…which I ain’t gonna lie to ya, likely has more potential for reaching a larger audience label-wise.  With EM herself now in her 20s…don’t get me wrong, she clearly qualifies as an adult…but in my opinion, we gotta get her right out of the Adult Contemporary confusion unless there’s something else that I’m missing entirely here – she’s got a much better shot at getting her music out there into the world where it belongs by being far removed from that one label, or really any other for that matter.  Let music like this speak for itself – don’t let the people out there have the chance to form any preconceived notions about what they might find…and if you do, be as sure as you can that you’ve found the right place for it, otherwise it’s bound to cause more confusion than the effort would be worth.  EM’s got talents that transcend any mere one tag – she’s been performing & recording since she was TWELVE years old as far as I’ve read and I’ve researched…there was never really any question about whether or not she’d sound good – she sounds amazing, because she’s put in the work and she’s had all that time & experience to use to her advantage.  Now it’s all about buckling down on the rest and making sure that this music has every chance & opportunity to succeed as it should; that goes from the concepts of the songwriting, to being objective & hearing it how we might as listeners, and doing a lot of back & forth to find that middle ground where as an artist EM still says exactly what she wants to say, how she’d want to say it, and yet also have us not lagging too far behind her in that regard.  Because I listen to a track like “Say What You Mean” and all I can hear is how perfectly & flawlessly she’s nailed this whole concept from start to finish…and that’s the entire difference between the first track I listened to & this one.  In terms of her own performance as a singer, or the quality of the music itself surrounding her, it’s nothing but aces hands-down…EM has a genuine gift when it comes to the art of expression, and the more she hones in conceptually, the tighter her material will always be.  I felt like the proof of that was right here on display throughout the entire duration way through “Say What You Mean” – this is a powerfully emotional, and all-out grippingly intense tune from beginning to end that’s all incredibly well-written from the core melody to the lyricism EM has woven into this tale.

She’s got all the right talent it takes to do whatever it is she wants to do…whether that’s climb to the top of the Adult Contemporary charts or otherwise, she’s more than capable.  I hear the potential for a Lana Del Rey type of darkly tinged Dream-Pop myself, but who knows – maybe y’all hear what EM does in an entirely different way than I do personally, and that’s obviously more than fine.  All I know is she’s got the voice, she’s got the look, she’s got the songwriting chops she needs to succeed…and in the grand-scheme of things, she’s still incredibly young with a massively bright future ahead of her, no matter how much she’s already achieved.  I highly suspect that what we’ll hear from EM as time goes on will simply reveal her evolution as an artist continually in all the right ways…I think she’ll just get better & better as the calendar continues to move forward, and considering how great she already IS, that’s really sayin’ something.  So don’t go gettin’ it twisted…I’ve made some observations yes, and I’ve said my piece – but at the end of the day, I’d be the last guy on earth to argue against EM being the kind of artist that makes it out there in the music-world…truly, I think she’s a visionary artist in the making with all the hallmarks of a real superstar in whatever genre she chooses to be part of, just gotta keep that vision as clear as it can possibly be, dial in on what works best, & never be afraid to let her music genuinely speak for itself.

Find out more about EM at her official homepage at:  https://www.emmusic.net