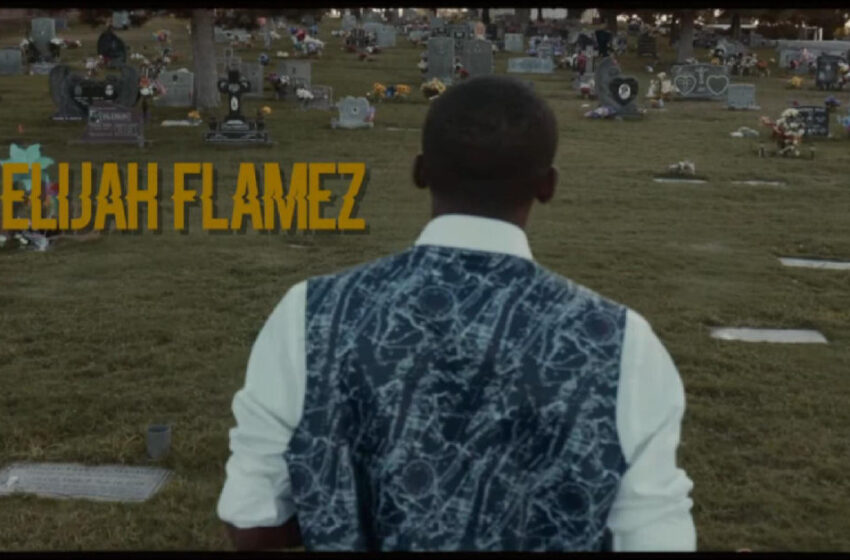 Respect to the main man on the m-i-c – it takes a lot on the inside to put out a track like this.

Clearly artist Elijah Flamez has been through a full share of hard times in his life growing up…I can verify firsthand that it only takes a single spin through his latest cut to get a grip on just how personal this track is.  You can hear it in his words…there’s no doubt about that…but you can also hear it in his voice; I give the man major credit for holding his own & rappin’ about the hardest parts of life we experience.

Look.  I’ve said countless times on these pages of ours how important it can be to put as much of yourself into your music as possible if you really wanna establish that connection with the people out there – and again, credit where credit is due, Elijah’s droppin’ the blueprint on how to get it done right.  Fearlessly combining his own personal story about growing up & losing the strong female influences in his life, his mom & his grandma, to various situations he’ll describe painful detail by painful detail – you feel the words that Flamez is spittin’ out, and you know from his tone of voice & the vibe that this is all based on harsh reality.  It’s the kind of cut with such impressive lyrical imagery & natural descriptions that you know it couldn’t be faked…this is Elijah’s life, unfiltered, raw, real…and too often so far, tragic.

The question is…how do you respond…as a man…as an artist…as a vulnerable human being that has genuinely lost too many people he loved by such a relatively young age?  You do what Elijah’s doing now – you go after LIFE itself, and you give it everything you got – because “Pressure Makes Diamonds.”  You honor the fallen and those that placed their faith in us by doing the most you can with each and every day you’ve got and bringing your A-game to everything you do – and if you can do that…then it’s all for something, know what I mean?  Too many people pass away and it’s all for nothing – make it be for something…rise up to the challenge like Elijah has on “Pressure Makes Diamonds,” and put the work in.

Sometimes that means you gotta head into some of the darkest places in pursuit of the light & survival.  Sometimes you’ve gotta write a song like “Pressure Makes Diamonds” if you’re even gonna be able to write another track later on in your life, you feel me?  There’s catharsis & healing in putting your feelings out there into the world for all to hear; and as listeners, we empathize with words & experiences like these.  For myself personally, I think the insightful lyricism that Flamez drops with such precision & heart speaks a ton on his behalf of a writer & entertainer – and it’s the main line of the title itself that ends up speaking volumes about the man behind the music and what he’s learned from his time on Earth so far.  “Pressure Makes Diamonds” y’all – that’s as true as truth can be – and to me, what makes this cut connect as boldly & strongly as it does, is the way Elijah spits this one line with spot-on energy, tone, and vision – it’s the centerpiece of the entire concept, the reality of his life, and an all-out solid hook.  Essentially, the rest could have come out sounding great – and it does – but had the main line fallen flat somehow, this whole cut would have fallen apart at the seams on a conceptual level – it’s the fact that Elijah nails this line so perfectly that we as listeners know, he’s found a way to turn personal tragedy into inspiration, art, and music…you can audibly hear the commitment, focus, and dedication he has.  That’s the magic…that’s what makes it all work, right there.  He’s chosen to make this all for something – and he’s paying tribute to those he’s loved & lost by making sure he’s the best version of himself that he can be on the daily – which clearly also involves time in the studio and onscreen making videos as well.

He’ll take you on a genuine trip through memories & nostalgia and show you how that all ties into his life today in the stylistically shot video directed by LONNI3 T. supporting “Pressure Makes Diamonds,” cleverly mixing it up with the visuals onscreen to show you how the past so often meets the present.  No lie, it might not be the happiest cut you’ll hear this year – but I guarantee it’ll be one of the realest by far – Elijah holds nothing back in letting the pain out – and it’s in doing so, that he’ll carry on even stronger from here on in.  “Pressure Makes Diamonds” – there’s no doubt about it – listen to this dude shining in his performance through his latest single – he fits this vibe flawlessly, he’s on-point with his bars – the man’s got skills!  Elijah Flamez shows up big when it counts & this is proof; there ain’t no doubt that the people in his family that he’s loved & lost along the way would be proud of the man/artist he’s become.

Find out more about Elijah Flamez from the official pages below!