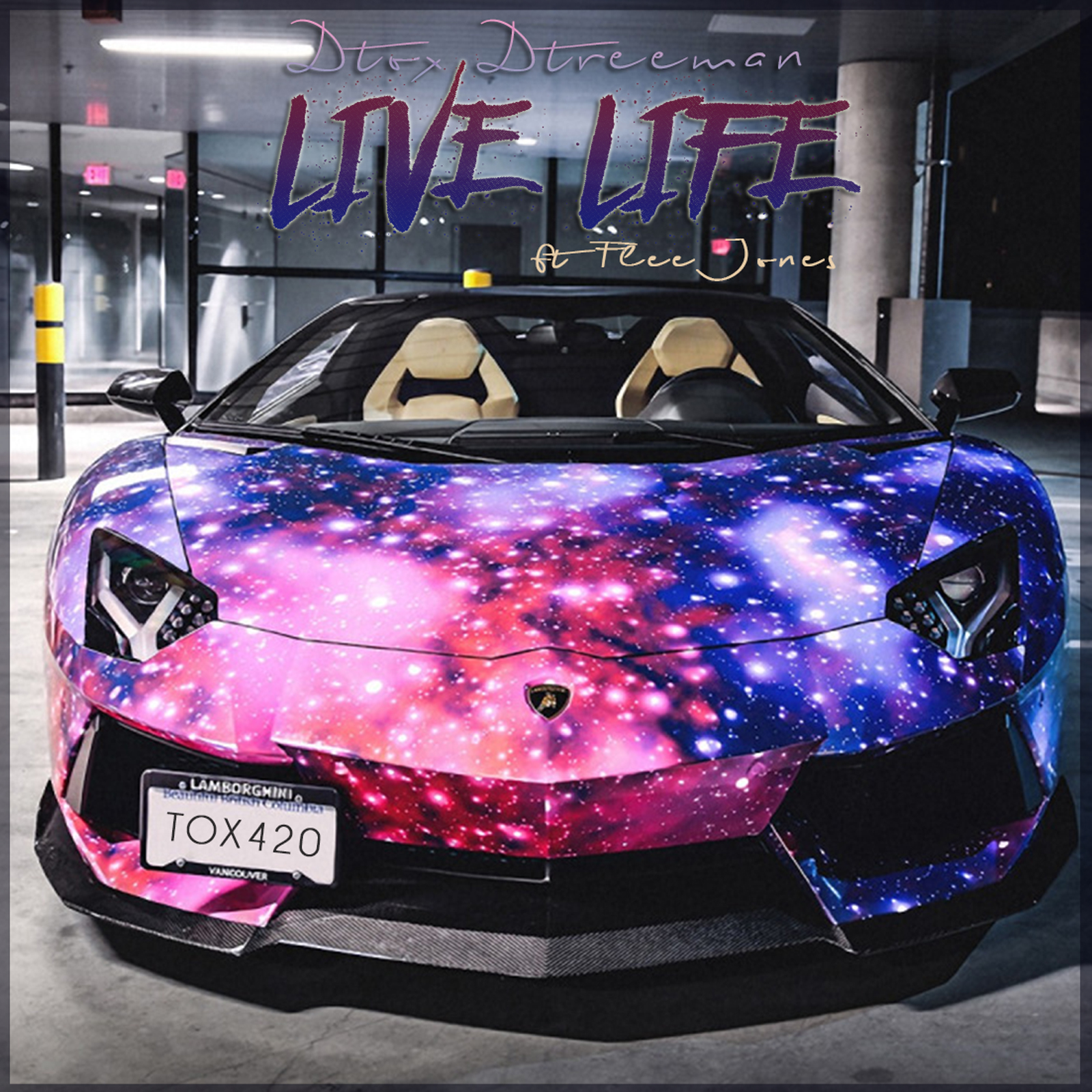 I dig this guy.  DTOX is a rap artist with conviction in his words – whether he’s seeking some laughs or laying it all out there for you straight – he continually demonstrates a mastery of words and paints clearer-than-clear pictures through the imagery he uses in his lyrics.  And even though I’ve only talked with him briefly…just enough to grab some links to singles posted-up at Soundcloud – dude was ripping so fast through his day he even sent me a link to a song that doesn’t even seem to EXIST yet!  Life can move fast when you’re on your daily grind – we’re no strangers to that here at SBS!

So…in the interest of honestly trying to track down something else in its place…I actually stumbled upon a private playlist that DTOX has posted, which included two of the other singles that I was heading to find anyhow.  Low and behold…I found two more on that list…so I figured I might as well cover it as an entire set; never did find that other song though.  Suppose that means there’s more music to be had from DTOX coming out just around the corner…and after what I’ve heard already – I’d consider that to be a mighty good thing.

I have what seems to be a tendency to bag on rappers that spend their time on lyrics that cover the standards…the bitches…the money…the guns and the drugs – but there’s always been a reason for that.  It’s a lot more rare to find a need to explain why that IS, that’s all.  The fact is…those subjects tend to be what a great many rappers DO write about…and if they all sounded as REAL as DTOX does, I’d have no problems at all, I’d love it.  Reality suggests that 90-95% of the rappers out there front their real-life experience…as gangsta as they can be until it’s time to stop recording, then it’s back into their minivan to head home to suburbia and their parent’s basement suite.  You know what I mean?  I have ZERO problems with anything about the typical subjects of rap-music as long as they come out sounding believable…like you were REALLY a part of what’s happening through the lyrics…and really, not all that many sound like they’ve done anything other than borrow from their idols and see it on TV and movies.

DTOX clearly lives the life you’ll hear in his rhymes…that’s something you can audibly HEAR and draw an easy conclusion to.  When you hear how smoothly these rhymes come together and how easily DTOX lets them flow into the mic, you know that the words he’s rapping are built into the fiber of his very core.  This is all relevant and real to him – and because of all that strength to his words, swagger & flow – we BELIEVE it as listeners…and it all becomes REAL to us too.  That’s a gift, straight-up.  A gift of talent in his case, and because he’s actually using it and not letting it all just hang out on the couch – it’s also the gift of music for the rest of us.

So consider yourself lucky!  Listen to “TheDopeNess” and you’ll start to get what I’m saying right away.  MAN that beat is HUGE!  Not only is the music solid with its mix and sample choice, but DTOX came out booming from our studio-speakers here with an army of talent ready to back him up!  Featured on this first cut we listened to, were the talents of Trip Dubz, Gutta (Southdvt) and Vicious – all combining their skills to really make the beginning of the experience listening to DTOX an enormous one.  Being as this is the first time I’ve heard them all, I’ve got no real idea as to who is doing what – but I certainly know when a track is realized to its full-potential.  All the emcees deliver complex-rhymes over a flawlessly smooth flow and everyone sounds right into the music, the lyrics and they’re getting right down on this track.  “TheDopeNess” has massive hooks and a seriously attention-grabbing sound that pounds with genuine authority – it’ll pull you in to listen quickly, because your ears know damn well that listening to the good-shit is what they’re on your freakin’ face for in the first place.  “TheDopeNess” sounds fresh, sounds new, demonstrates huge doses of serious skill from the verse to chorus, to the lead-vocals & backup support – you can hear instantly that not only is DTOX himself loaded with skill and innovative ideas, but that he’s also running with an absolutely solid crew of talented homies he can call up for an assist at any time.

The bass-line driven, low-down beat of “Live Life” also hits the spot.  With big effects on the vocals driving the chorus-hooks, it breaks away cleanly to let DTOX work his magic in the flow.  “Live Life” has humor, has serious moments…it really finds a way to really spring to life in whichever gear it wants to shift into.  And though it’s a completely different beat, different pace…the tone and flow of the rap often reminded me of…awwww what was that video…”Save Dat Money” by Lil Dicky, Fetty Wap and Quan.  It’s just got that similar bounce in the lyrics & vocals and the way that it responds to that rubbery-bass, pivoting and shifting like it’s playing for Golden State.  Definitely a digable sound – and within two-tracks, I’m pretty convinced that anything I might hear from DTOX aka Dtreeman is more than likely to find a way to satisfy the ears each and every time.

Of the four-songs here, they do all go on to find an easy spot at the top of your playlist.  “Who Got It (Who Got The Bud)” would more than likely make the least impact on you if you were listening to this set of four like I am now.  Not the song’s fault in the least – it’s a smooth, chilled-out jam…just so happens that it happens to be nestled in between some of the phattest rap-jams that you’ll find this year…so whatcha gonna do?  I dig the subject, certainly relate to it being from Vansterdam long before we made our way to the east-coast…if anything I relate to it a lot MORE now that I’m here!  I always used to know “Who Got It” but now that I’m here on the other side of Canada I’m finding out more often than not I’m wondering “(Who Got The Buds)!”  But yeah…aside from the fact that it definitely makes me want to find my bong and I’ve got nothing to put in it right now – it’s another solid jam with some of the best assembled lyrical-sets from DTOX.  The way the chorus comes out so chill and so hazy…it’s about as close as you can get to being stoned just from listening to music.

I didn’t know it at first…but I saved the best for last.  Again…not taking a single point away from a jam I’ve heard prior to this one – but “I’m So High” has got it ALL goin’ on.  The beat on this cut is beyond awesome…so addictive to listen to – but the reality of this one is that DTOX has got himself a flow that is realer-than-real…it comes out sounding like it fits as perfectly as a fresh pair of Jordan’s!  The crisp snap of this beat has put DTOX in a position where every direction he turns, each switch in his transitions and flow all work with the music perfectly.  Again bringing in some light jokes to keep this whole joint lit-up with enthusiasm – “I’m So High” is about as fun as a track can get, and it’s expertly assembled.  Admittedly…a track like this puts our emcee a lot closer to what I’d consider to be real hip-hop music than where this listening experience began…but I’m sure that’s alright with Dtreeman…no harm in double-dipping & flipping the script up on us if it all sounds this good!

Been a while since I can remember an emcee from the independent scene that represented both genres so professionally, so smooth and so REAL.  Gonna have to track this guy down one day and burn one with him in celebration – this is good shit right here DTOX, consider me a fan for sure!