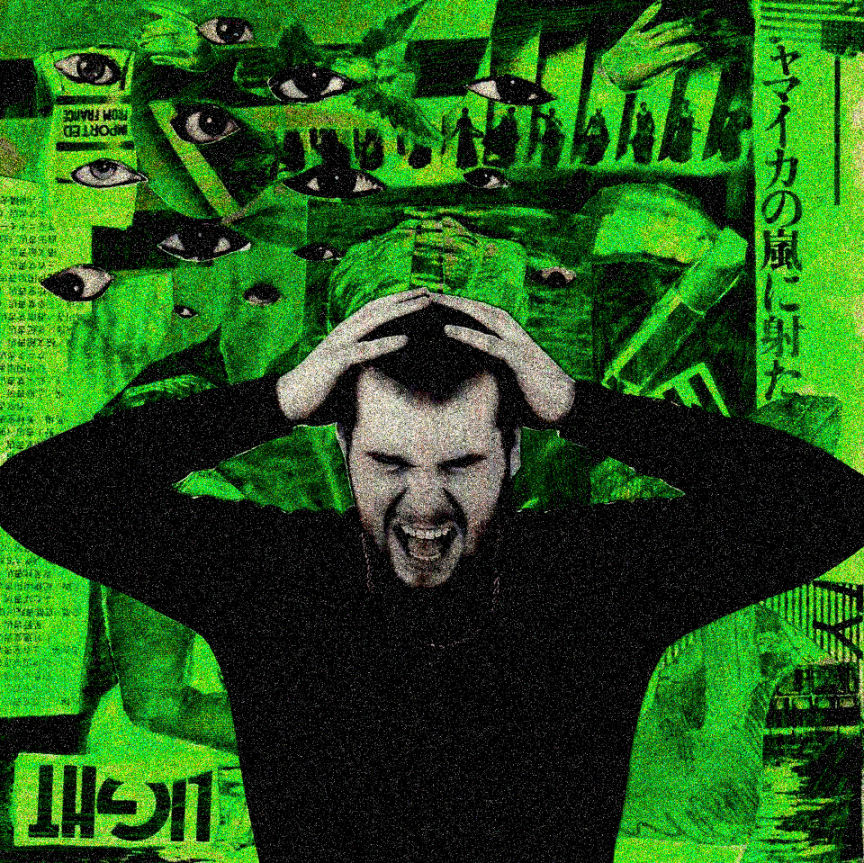 When you’re picturing the hip-hop meccas like New York, Brooklyn or Philly…the next name down on your list probably still isn’t Windsor, CT. The advantage of having people not see him coming is something that most likely has been with him his entire like, coming from a place where rap isn’t known to be as much of a commodity and also being the white-guy that can legitimately hold a microphone in the rap/hip-hop genres. No use in hiding it – we all know exactly how rare it can be – and as a reviewer I can certainly vouch for the countless scores of whitey’s out there that want nothing more than to emulate the style they love so much, only to fall a million miles short of reality and ability to pull it all off. Today, Dr. Yelik offers you both intense-skill AND creative-innovation throughout the songs on his new album Ootheca, putting on a full display of the hard-work & effort he’s put in to get this far.

If you’ve got an ear for the bizarre, the inventive…texture and atmosphere…that’s what you’ll get instantly as you start up Ootheca with the opening-cut “Once An Addict.” If this track doesn’t already hint at the fact that you’ll be in for an adventure…well…I mean if it somehow isn’t doing this for you, just know that I’m over here then missing the point, because I’m loving the beat & music driving the verse & ideas through this first tune. Nothing is typical…the song itself has been broken up into several pieces, ideas, rhythms & grooves…samples, rap-verse, instrumental sections…it’s like when Dr. Yelik began to record this album that no one told him he’d be allowed to record more than a one-song album and he’s gone and tried to stuff this first track with everything he’s got and all ideas become rolled smartly into one. Like a wicked mix-tape, “Once An Addict” rolls smoothly into “Undiggable” as the Dr. Yelik train starts to pull out of the station and really make your brain & body move.

“Undiggable” was impressive to say the least. Not only is Dr. Yelik’s mic-style an extreme nod to old-school intellectual hip-hop (Read: back when it was all about more than bitches, money, drugs & guns) but he raps it all out confidently and with intense precision. Each line rips by at blazing speeds…and you gotta love rap/hip-hop made in this particular lyrical style just for the sheer joy of being able to listen to it all multiple times and still catch something new being said for months afterwards. “Undiggable” is definitely a little more ‘straight-ahead’ than the opening tune was…but there still doesn’t seem to be anything typical about the Dr. Yelik approach to music – something he’ll demonstrate even further through the rad glitch-filled electro-madness of the instrumental “Flux I” followed right up with the funked-out beginning to “Red Matter.”

‘Lovely lady lumps inspired my testicles’ – okay wait…did I just hear that correctly? That’s freakin lyrical brilliance right there is what that is…I don’t care what ya think, I know it when I see it and that’s exactly what that is. “Red Matter” continues to display lyrical-awesomeness with references to ‘titty meat’ and all kinds of descriptions that will probably make you spit out the drink you’re sippin’ on and bust out laughing. Again, something you can hear from “Red Matter” and “External Affairs” to follow is that real love of the old-school hip-hop, when people were clowning around without worrying about getting shot for making a brilliant joke, or starting up beef through songs. As a result, you get tracks like “Red Matter” that really put the humour & wit of Dr. Yelik on center-stage, and cuts like “External Affairs” that contain cleverly sampled beats that resemble the time when it was truly ‘all good.’ Where Dr. Yelik really puts a win in the column for me, is his constant mixing it up; just like you’ll here in “External Affairs” featuring Murf. Making a dramatic departure and switch in the middle of the track, the Dr. seems to have a good read on his audience, or at least me the guy listening at the moment, ‘cause the chilled out beat that ends “External Affairs” (well…you know…ASIDE from the final three seconds) was supremely laidback, has a perfectly pleasant vibe to just zone out & brace myself for another onslaught of thought-provoking rhymes right around the corner.

There are a few moments in throughout these early-stages of Ootheca where I felt like the music itself could be a little thicker overall…or maybe have the Dr. set a little further back into the track to make it all pop out just that 10% more, but for the most part I can’t help but dig on the way he’s approached this record. You’re not going to find songs like “Freeze Tag” just floating out there in your mainstream waiting for you to fish them out – you’ve gotta go underground for raw & real tracks like this. This cut becomes increasingly rad as Dr. Yelik adds some effects to the mic and spits out lyrics where ten-letter words are pretty much the minimum requirement to become part of the song. Or how about how he starts out “Boogeyman Funk” with an ENDING? Who does that? You won’t even believe the result when “Boogeyman Funk” kicks in – Dr. Yelik makes the most of this synth-bass beat on repeat and kicks out one of the most uplifting sounds on Ootheca so far. The dude’s metering skills are as sick as they get…if there’s too many words in here I’m not the guy that can tell – he’s got everything coming out precise, on-point and displaying tremendous amounts of skill throughout each moment passing by. A perfect example of the way that Dr. Yelik prescribes music to make you think and make you move, all at the same smooth time.

The disadvantage of old-school hip-hop and rap-music that jams every word it can into the metering is that you do run the risk of losing the listener somewhat, as each cut can become like a lyrical marathon-sprint to the finish – and by doing so, it leaves a rapper with little ability to do much in terms of change up the style of the flow itself. Intellectual lyricism tends to be so packed, wall-to-wall with words that an over-loaded album without enough changes in it becomes hard to repeat; again, I think this is where Dr. Yelik has played it smart by breaking up the album in spots like just after the aptly titled “Attention Deficit,” where admittedly I was starting to feel the weight of some many words entering my brain. I needed something to break it all up again, just slightly…to let the ol’ dome take a moment to absorb the entire dictionary that’s been thrown at it in less than a half-hour’s time – and the Dr. delivers with the science-lab experiment gone awry in “Flux II.” Awesome atmosphere in this instrumental…it’s a whole other world for sound and a true departure from anything we’ve heard on Ootheca so far, and as I’ve already pointed out, it came at the perfect time to get us all back into the music and ready for what’s next.

Taking us into “Blue Matter” – Dr. Yelik overall so far has reminded me of like…some sort of awesome combination of artists/bands like De La Soul, Digable Planets running into something like Prefuse 73. There’s precision, madness, control, wild-innovation and bizarre ideas meeting professional execution all throughout Ootheca…a mix-mastery of mayhem and audio-mischief. “Blue Matter” plays like a television that’s changing through channels before finding the right one with about a minute or so to go, landing on Dr. Yelik who rips a lightning-fast rhyme into the end of the track. And C’MON – that beginning to “Guess Who” and the following tricky, jazzy beat to come is right into the beyond of awesome; it sounds like you’re riding in that cab in the theme or era from the TV show Taxi…only this time around it’s not Tony Danza driving you around…nah son…much cooler to be riding in this cab with the Dr.! You dig?

Now…it’s only because the Dr. is also such an apparent audiophile like myself that I feel comfortable in saying that after “Flux III” came on, I was pretty convinced that all three of them might have been my favourite cuts on this record. I have no doubt whatsoever about his mic-skills, and he’s proven them time and again throughout Ootheca, but these instrumentals he’s created through the series of ‘Flux’ tracks have really brought-out a whole other side of him that I think is of a completely equal intensity, caliber and strength. Closer to what I listen to in my own daily grind, these creative, wordless masterpieces are sonic tapestries that go into these ears comfortably and smoothly…loved them all.

Smartly changing it up just enough yet again, “Pangloss” is the longest cut on the record, but also one of the most versatile & diverse offered in the vocal-flow – a very smart move on part of the Dr. with this song clocking in at over six minutes long. Allowing himself to get a little more air throughout the first several minutes and verses of “Pangloss,” you can hear a little more groove & swag in our narrator hear before the final minutes shift gears into overdrive and Dr. Yelik rips the mic a ‘new one’ on the drive to the end. I was digging the beginning, there’s no doubt – but it’s the attack he puts into the end of this song and the way that he goes after the final moments of “Pangloss” that really make it magic.

There’s a lot of social-commentary that runs deep throughout Ootheca, and you’ll hear a bit of that on full-display through the sample that starts out the final track “Defunct.” This final track I think is probably one of the songs on the record that probably could have brought that music up just a little more, but at the same time, this is also the final impact the Dr. makes on you through his lyrics and rhymes…so I kinda get that he’s as far above the mix as he is. That being said, I felt like he was up more noticeably here in this final track than on any other, but also like any other song on Ootheca, Dr. Yelik delivers confident, solid & perfectly-timed rhymes flawlessly. More exposed than on any other track, you get a full dose of the skills that brought him here to begin with, the ones he was born with, his voice – and he pulls it off as professionally as you’d expect by this point bringing Ootheca to a decisive end.

Definitely a ton going on with this innovative mind – Dr. Yelik will never let you get bored and he’ll always switch it up to keep you interested. Smart & creative enough to let the music share the spotlight – this rapper/producer could very well have a long & exciting future in music ahead of him.