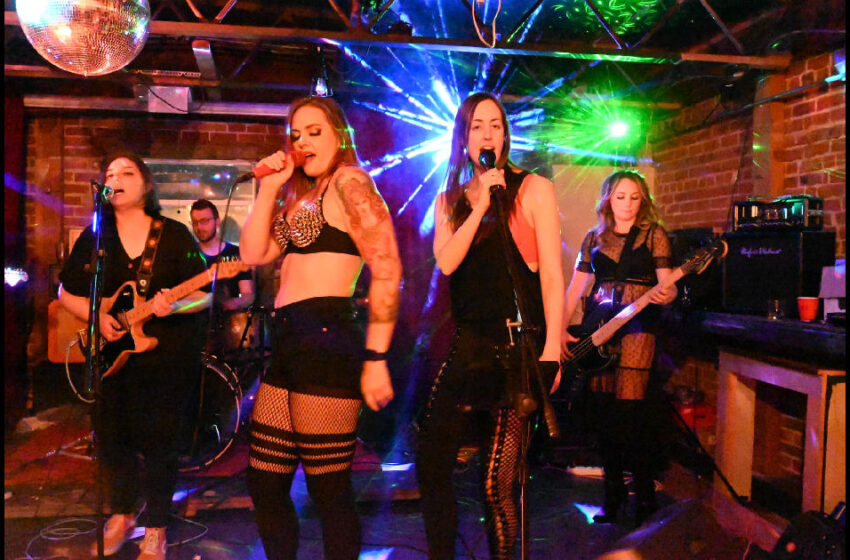 We’ve got a good start goin’ on here…but I think I’m probably more interested in where it’s going next.

Based out of San Francisco in California, Doll Parts is a band built upon many influences…so many, that currently, it seems like they’re doing their level best to try and pin down what it is they really want to accomplish with their music…and they might have a ways to go on that still.  There are things that you’ll read about in their bio…there are things you’ll hear in their music…and there are points where those two things intersect, and parts where their story & sound seem to deviate a little bit as well.  On the bright side, they’ve got lots of options when it comes to what they can do with their six-piece band – and of course, the flipside of that coin is that it’s always tough to get everyone on board in a crew that large, in addition to being able to have everyone’s needs, wants, and desires represented in the music.

I was surprised to read in the bio that “there’s a stereotype that female bands are either sad and lonely and pining for some dude or angry and ready to fight the world.”  I haven’t lived their experiences of course, so I can’t speak to what they’ve been through, especially as some random male critic on the internet – but…yeah…I’ll admit, growing up in the Grunge era with bands like L7, Bikini Kill, Babes In Toyland, Belly, The Breeders, etc. etc. – the age of Kurt Cobain helping to champion what female bands were capable of & highlighting how they could kick the ass of most male-driven bands any day of the week & all…I guess I figured we’d moved past all that gender-related misogyny & whatnot, but maybe that’s still not yet the case.  Having lived through the 90s and survived to tell the tales as a proud Generation X’er – it was obvious to me that a band named Doll Parts was going to have some crossover with the riot grrrl sound & vibe, clearly having borrowed their name from the first track on Hole’s Live Through This from back in the day.  I was honestly never huge into Hole…though I’ll admit, I watched Miley Cyrus take on a cover of “Doll Parts” just the other day in some clip on the internet and thought to myself, ‘I never thought I’d say this, but Miley can’t hold a candle to what Courtney can do with a song like that.’  Much to most people’s surprise, I ain’t no Miley hater at all…I actually think she’s a phenomenal singer, and I’ve never really felt that way about Love’s vocals…but in this instance, Love crushes Miley, a full 100%.  Anyhow.  I digress…sorry.  Just giving ya some context so that you know I’m not coming at this review completely out of left field…and truthfully, if you look at their list of influences online, you’ll see that Doll Parts actually has more in common with a straight-ahead Rock vibe than the Alternative/Grunge crowd anyway…which I suppose is part of what made my first experience listening a bit more confusing.

Because I guess that’s what I was expecting, given the name…I thought I’d be in for a band that was taking on a style similar to Hole, and in clicking on “We Are The Girls,” you’ll find that Doll Parts sounds a whole lot more like something you’d find in Joan Jett’s music, or even the freakin’ Gin Blossoms for that matter…and they might just have to reconcile with that a bit in their future to follow.  You’ll find no complaints from me on a combination of sound like that for the record…I dig the fire in Jett’s music, and I dig the melody in the Gin Blossoms…”We Are The Girls” was like the more Pop-influenced side of Joan’s music crossed with the maximum intensity you’d ever find in the Alt/Pop of the Gin Blossoms.  I’m just sayin’ it’s weird to read about bands influencing Doll Parts like Hole or freakin’ Godsmack in their bio in context of relation to the sound we hear on this single…but it’s genuinely tough to get the full scope of what any band can do within just a few tunes to be fair.  What I can tell ya without a doubt, is that I really enjoyed “We Are The Girls” – this is an anthem, the mood & the moment, all in one – this six-piece plays it like they own it for every second you’ll hear, and that’s what always matters most to me.  I can also definitively say that I can’t stand Godsmack, and interviewing…good lord…what was his name…Tony Rombola, back when I was with Kludge Magazine first starting out in music journalism was one of the worst experiences I’ve still had to this very day…but that’s another story for another time.  I’m just saying that to hear more Gin Blossoms than Godsmack certainly works for me y’all, yes indeed.  What I loved about “We Are The Girls” was that this band plays this single-worthy song on a completely unified front, their vocals are absolutely spectacular, and their musicianship ain’t all that far behind that; Doll Parts plays with a significant amount of confidence…the kind you’d find in their own heroes or veterans of the scene that have already been around for years, and they should be mighty proud of that.  Plus it’s catchy AF too…don’t think that just because I’m some dude that I’m above turning up a track like “We Are The Girls” as loud as my system will carry it and singing aloud with it at the top of my lungs – I’m all about bands that play with real passion in what they create, and Doll Parts has got plenty of it.

“Just So You Know” is bit more rough around the edges…a lot less polished than you’d find Doll Parts on “We Are The Girls,” with a song that’s got about half of the potential appeal to the masses out there.  I ain’t sayin’ that makes a song any less worth playing…I ain’t sayin’ that YOU won’t love it either – you very well might, and if ya do, as always, you’ll get nothing but a high-five from me.  We all like what we like and love what we love…all I can do is be honest about what I hear – “We Are The Girls” is one of the easier songs to dig on that you’ll hear this year, and “Just So You Know” is a bit more of struggle in that sense by comparison.  Doll Parts has remarkable assets in their vocals from the lead to the background – I’m definitely loving that about this band without question, even though I also felt like the performance on “We Are The Girls” is noticeably stronger overall.  Maybe it’s just a vibe, sound, and style that comes more naturally to them…they’d be the only ones who would know that for certain.  “Just So You Know” has a much more audibly tougher sound to it…and in a live setting, I think it could work well…it’s a hard type of energy to really capture in a recording, but they’ve still given it what they’ve got.  To me, this track is hindered a bit more by the production this time around…personally I think that bass sits up too high in the mix, which seems to shrink the rest of the instrumentation surrounding it…it’s well-played, but that mix needs a tweak or two.  Vocally, it still comes out strong…a bit less sure of the direction or which hooks are the ultimate ones to lean on perhaps, but still a performance that comes out swinging for the fences, and I like that about the attitude in Doll Parts.  We’re not all gonna hit homeruns straight over the wall every time as artists & musicians, but we can sure at least make it clear that we intend to, and I felt like we really hear that in the way Doll Parts brings it to every second of their material.  Do I think they’ve got more potential than we hear in these tunes?  I suppose that becomes the real question – but I think the answer to that is a definitive YES…this is the kind of band that gets stronger & stronger with more experience & time playing together…and if they’re already as good as they are, there’s every chance they’ll go on to greatness.  I think the answer lies somewhere in between the sound of these two songs for them…lean on the accessibility of a song like “We Are The Girls,” keep the fiercely raw edge in a track like “Just So You Know” – and continue to keep playing like you’re ready to bring down the house at every opportunity…somewhere in the middle of all this good stuff, the pathway forward for Doll Parts will be illuminated.

Find out about Doll Parts from the official page at Facebook:  https://www.facebook.com/DollPartsRock

Tags: Doll Parts Just So You Know Singles sleepingbagstudios We Are The Girls