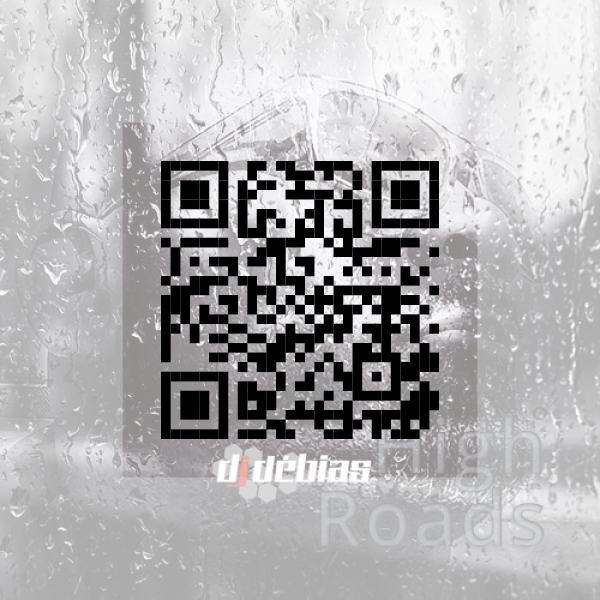 First off, let me say that this won’t exactly be what you’ll expect – which in my opinion is a really damn good thing, always.  I appreciate what DJ Débias has created here on this new single called “High Roads,” which as I understand it, is the third release from his Nomadic Hearts EP – but it’s anything but typical for what you’ll hear from a DJ in the present day.  Again, in my opinion – being surprised is always a good thing in music; and where I was kind of expecting things to take the usual turn into modern-day DJ-styles of EDM or IDM music – DJ Débias heads the other direction entirely and gets right into the old-school with a clever mix of texture, sound and atmosphere on “High Roads.”

You see, rather than jump onto the electro-train like so many DJ’s out there – DJ Débias has found himself at the roots of it all…you can even hear sounds like actual records being scratched throughout “High Roads” in a real effort to bring it all right back to what a DJ was supposed to be in the first place.  I’m sure many of you have at least read or heard about Deadmaus recently calling out one of his own from the genre for playing a YouTube video during his set onstage – and rightly fucking so.  Somehow, someway…that’s become an ACCEPTABLE thing to do…no one complains, they just keep on dancing…and that’s straight-up horseshit.  A real DJ like Débias would feel exactly the same way I’m sure – because he’s clearly making this mix on “High Roads” from the ground up – and you got it…I got a lot of love for that, yep.

But not only does the music itself reach back into the genre’s history – it does it twice by going old-school with the hip-hop vocals as well.  Again – to know where DJ Débias is headed is somewhat to know where music has been…and I personally think I can hear that he’s grown up listening to a lot of the giants of the genre that have paved the way for him to be where he is now today.  Artists like Kool Moe Dee…KRS-ONE…Heavy D…Ice-T…there’s a similar flow and feel to a lot of the rhymes coming from the mic on “High Roads” – but for someone like myself that grew up on those records and tape-decks jammed with the Rap Traxx series #1 all the way to #whatever – I was there…I listened…and I loved it.  Still do.  So for me, to hear what DJ Débias is doing on “High Roads” provides a level of comfort alongside its smooth flow, composition and tones…it’s music that I’ve been missing without fully realizing that this sound was somewhat absent from our mainstream today; and hearing it here done tightly by DJ Débias makes me realize just how much I really DO miss it all.

I’ll put it to you this way – before the world’s DJ’s went the extreme-electro route…there was actually a level of organic composition that DJ’s possessed.  Creating their own sounds to sample…scratching records…getting right in there like DJ Débias is with the vocals…and even though it was all still coming out of a deck onstage – it was REAL somehow.  “High Roads” takes me right back to that era – I think the amount of audible respect that this track has for the history it clearly borrows from is as insightful as it is enjoyable to listen to.  DJ Débias is filling an entire hole in music on his own right now with a sound like this – and that could very well pay off extremely well for this guy.

He’ll roam through well-mixed-in samples from the piano, drumbeats and much more through the effects and strings…there’s a lighter-side to the melody that contrasts brilliantly with the overall seriousness of the song itself – and it’s all metered & doled-out in perfect doses where you never get too much of any one thing.  Nothing seems repetitive and for an old-school-based sound – it all comes out sounding incredibly fresh – so give this guy some serious credit cause that’s no easy accomplishment.  Generally speaking, you’ve got your old-school and you’ve got your new-school – but rarely do the two worlds so massively spread apart come together as smoothly as this does.

DJ Débias – you’ve got my vote brother.  I can understand and hear that a lot of people might not ‘get’ this song or the overall ambition of his ideas driving it…but I think those of us that were raised on the roots of the genres and taught to respect the classics will really sink their teeth into this as hard as I have.  DJ’ing is nearly a lost art form – and I mean that sincerely; the guys in control of the clubs and decks today do NOT know their own ass from a turntable – and DJ Débias is showing that the art in that music is not yet dead by a longshot on “High Roads.”  It’s a real salute and a truly respectful nod towards those that paved the way originally without feeling like it’s stepping too far backwards or ‘trying’ to be anything that it’s not.  Clearly Débias is a man with a lot of love for music and respects it; and by demonstrating that through the care & precision, the flow, the beats & the rhymes all coming together and taking their own individual moments to shine – he’s proving that the art of sound-collage is alive & well.

Find out more from his official page Facebook here:  http://facebook.com/djdebias