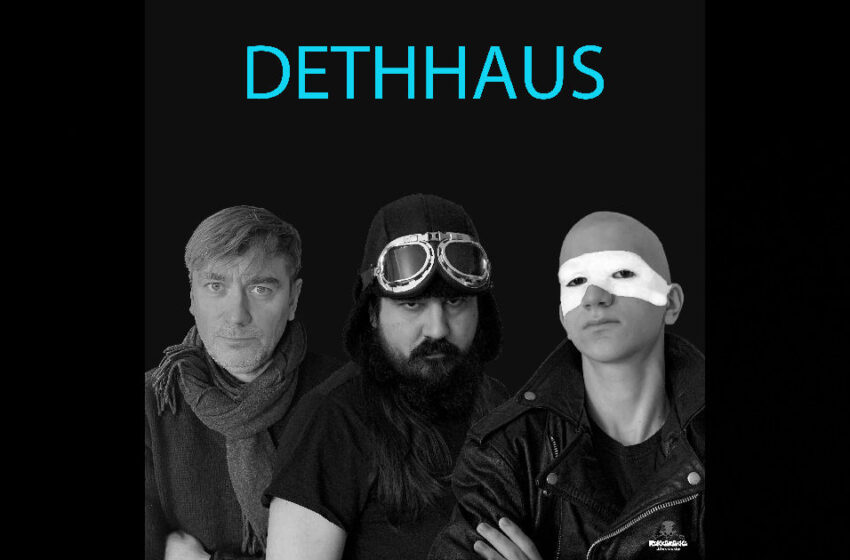 We continue on the path of exploring what it sounds like when Johnny Void checks things off his bucket list, like we did back in September of 2022 when we listened to a record called All Washed Up from his other band called X-Ray Youth, that was about twenty-four years in the making.  From what I gather, Dethhaus is a more recent project…looks like it began somewhere back in 2021 from the looks of things online…and word on the street is that it started as a surf-rock instrumental band.  I never really know what to think when everything about the music changes…does that mean it’s time for a completely different name, or is that simply a new chapter of a band’s history?  I suppose it could be either/or.

Anyhow…that’s the difference between the first EP and the new one from Dethhaus…Dethhaus 2 has vocals on it, and an extra player added into the lineup with Rajko Mud joining the band on keyboards & the backing vocals you hear.  I’m not opposed to what they’ve got goin’ on…it’s a good start, and further along in its development than what you’d typically find in bands that have been around as long as Dethhaus has been, which is the result of having veterans of the game like Void & Justin Welch (Elastica) that have been doin’ what they do for quite some time.  I don’t really think that it’s material that’s really gonna set the world on fire, but it’s surely another significant step in the right direction for the band’s evolution.  “Slipped Into A Dream” has that solid Alt/Punk-Pop energy that’s designed to be catchy, lively, and vibrant…Dethhaus pulls all this off with fairly seamless results.  I think Welch is probably the most noticeable highlight on “Slipped Into A Dream” – the dude’s drumming like his life depends on it, and the effort he puts in packs a whole lot of passion behind every beat.  They’ve kind of got this whole Meat Puppets-meets-The Doughboys vibe goin’ on in the way this track comes out…which ain’t a bad thing…but I don’t know that it’s gonna be the sound that scores them a permanent spot on your playlists out there.  I suspect they’ve got more in the tank than they’re currently revealing through these two songs on the Dethhaus 2 EP…but as I’ll explain momentarily, that’s actually a good problem to have.  All-in-all, they play tightly together as a unit and that’ll definitely be an asset as they continue on from here.

I’m probably much more partial to “And You” of the two tracks that are on this EP from Dethhaus…this second cut has a bit more of a tangible 90s vibe to it, leaning more towards the Alt-Rock side of things instead of the Punk-Pop sound this time around, which works for me.  When you hear how thick the bass is and the way it moves, combined with the psychedelic tinge the music has upon the surface, and the more muted production it has…it’s really not too far removed from the sound of something you’d hear on an album like Gish by Smashing Pumpkins.  Attitude-wise, it’s a whole lot less Smashing Pumpkins and sounds more like something you’d find in a low-key cut from Local H…but yeah…overall, it’s a combination that works well enough.  I appreciate the vocals being added in to Dethhaus and how that’ll give them additional options with their music/gateways in for people to get into what they create, but I don’t know that I’m convinced they’re the driving force that really makes us want to listen…yet.  I think Dethhaus will go on to find a whole second gear and likely discover they’re capable of more than what we hear here early on into this band’s career, with their best music still to be written and ahead of them in the future to follow.  Right now, I’m hearing solid blocks to build with, and a band that should definitely keep on going…more time, more experience together, etc. etc. – you know how it goes, the better the results will become.  These are good tunes, no doubt about that – but they’re probably missing that key element that’s going to make them memorable for the listeners out there.  “And You” shows promise, it reveals talent, and it’s got a whole lot of groove to it…the more I listened to it, the more addictive the whole vibe sounded to me, but I’m realistic about how far it could travel.  I’d loosen up the chains on the vocals a bit if I was Johnny…he’s got good ideas on both tunes, but my gut tells me the compression aspect of the mix is taking a bit of the spark and organic breathability out of the sound of his voice…and a bit more of that might go a long way.  There’s uniqueness in this band that’s well worth pursuing…the early side of a band’s sound is always exactly what it is – bound to improve and bound to get better.  As I like to remind many folks on these pages of ours, that’s exactly what you should WANT as a newer band…otherwise there’s nowhere else to go but down.  I’ve got no doubt that Dethhaus is still on its way up and dialing into the kind of band they want to be…and as they continue on that path, they’re bound to discover they’ve got all the right pieces of the puzzle to kick out some serious jams.

Find out more about Dethhaus from the Instagram page of their label at Rakka Rakka Records here:  https://www.instagram.com/rakkarakkarecords

Find out what we do & how we do it at sleepingbagstudios, and be the next up on our pages by clicking here!