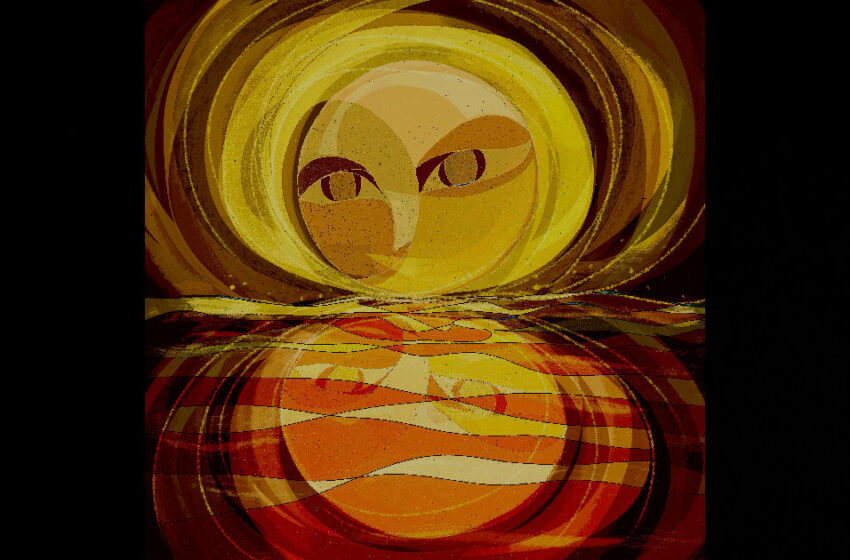 Lemme see, lemme see…what do I think about “Eyes Touch” by artist Deckard Croix?  That’s actually a really good question today…normally I feel like I just know what the answer is one way or the other, but I kept feeling like “Eyes Touch” would push me away just as much as pull me towards it with each time that I listened…so I suppose it’s probably fair to say the results seem a bit more mixed for this single.

As far as I know, “Eyes Touch” is an advance cut floating about the ether of the internet prior to the release of Deckard’s upcoming album called Marquis Verdigris.  According to legend, “Eyes Touch” was also originally recorded back in 2009…and I’m not really sure what has it resurfacing here all the way in the future over a decade later…that part’s more of a mystery to me.  There are songs that of course make sense somewhat to drag through time until they get their proper level of attention…but I’m not quite convinced that this is one of those.  That being said, I’m not at all sure that “Eyes Touch” would have worked theoretically any better back in 2009 when it was originally recorded either…if I’m being honest with ya Deckard my friend, this is a bit of an awkward cut, and a large demand for the listeners.

There are definitely a lot of positives to be found, that much I am sure of.  The lyricism for one, is pretty much all aces as far as I’m concerned…”Eyes Touch” is poetic, thought-provoking, and boast an exemplary selection of words that would make any songwriter jealous.  There’s a level of fantasy to the storyline, which I dig – and I also love how vivid the lyricism genuinely IS…Deckard is singing you a song where the words come to life in your mind in a highly visual & sensory way…that definitely checks the right box for me, I’m loving that too.  And I’ll be completely honest with ya – most, if not all of the theme is flying completely over my head by about ten miles.  We don’t always need to know what a song is about to enjoy something about it though…personally, I just really dig how these words all fit together.  Croix is an imaginative wordsmith & highly skilled one, if we’re judging by the lyrics penned to this tune.

Like for real…look at this, it’s gorgeously well-written:  “Glimmer for me, alight and retreat, a preface for the lens.  This vascular hatchet, peripheral magic, a measure for the end.  Subliminal marquee, inseperable gazin’, a preface for the lens.  Soft-focusing lovely, a precious delicacy, a measure for the end.”  Again…I’ve got no idea what any of that means really, but I certainly appreciate the writing of it.

With its dark tinge of psychedelic sound to it, “Eyes Touch” DOES have a level of swagger & appeal to it that I think will catch enough attention…and elements like the synths from Carrie Aldridge become a real standout as you listen to the lefts & the rights.  The musicianship in general is fairly effective…I ain’t gonna lie to ya, “Eyes Touch” is extremely loose in that regard and feels like it COULD be tightened up even further, but I didn’t feel like that was the vibe that Deckard was really going for in that regard.  I felt like the looseness was intentional…at least to a degree…but I’ll also admit that it seemed like it was almost like it made the song tougher to play than perhaps it needed to be at times.  Where things become like, extremely tough to assess…is whether or not there’s a main hook that’ll draw people in as much as Deckard might be hoping here…and I’m not too sure there is.  IF there’s a hook, it’s the song itself…the vibe as a whole…because the rest, neither verse nor chorus really presents anything that memorable…and that’s kind of what you need in a single, at least somewhere, right?  Like…chances are, I’ll remember hearing Deckard Croix…but that’s really my job & what I do for a living…as for the rest of the people out there…I feel like he’s got some major room to strengthen the highlights of what he does and make it so that people never forget his music.  I feel like as it stands right now, “Eyes Touch” is perilously on the edge in that respect…those that ‘get it’ will dig it of course, but as for the average everyday listener?  Honestly, I don’t know if there’s quite enough here to keep’em coming back all-in-all.

Time will tell as it always does…maybe I’m right, maybe I’m wrong…I never really know and all I can ever do is tell ya what I’m hearing.  I feel like Deckard’s going to be in for a bit of an uphill battle with this mid-tempo tune…and I think he’s got room to evolve even further with his craft as an artist when it comes right down to it.  Which…I mean…that’s kind of always a good thing, ain’t it?  We all need some room to grow in what we do and what we create.  Maybe he’ll feel like he’s just perfect the way that he is right now, and maybe he’ll just tell me to pound sand instead – it wouldn’t be the first time someone did, and it won’t end up being the last either if that’s the case, I promise ya.  All I’ve ever been is honest with the artists & bands I listen to, and with you, the five dedicated people that read this page of ours.

I’ll leave ya on a positive note…if anything, I’d love Deckard & his crew of musicians to let that instrumentation shine even more…in fact, I’d recommend it!  Listening to the guitar solo just past the three-minute mark & the ferociously gritty tone & depth that comes with the music for the next thirty to forty seconds or so…I mean…THAT is the real magic right there if you ask me.  The vocals are in line too as far as my ears are concerned…the melody is there, the musicianship is too really…it’s just the strength in the material and the accessibility factor that Croix might be fighting a bit with this particular single, or that might be perceived to be missing somewhat.  That’s my opinion anyhow…I’ll turn it over to the court of public opinion from here, and we’ll see if I’m alone on all of this, or if it’s the general consensus.

Find out more about Deckard Croix at his official website at:  https://deckardcroix.com