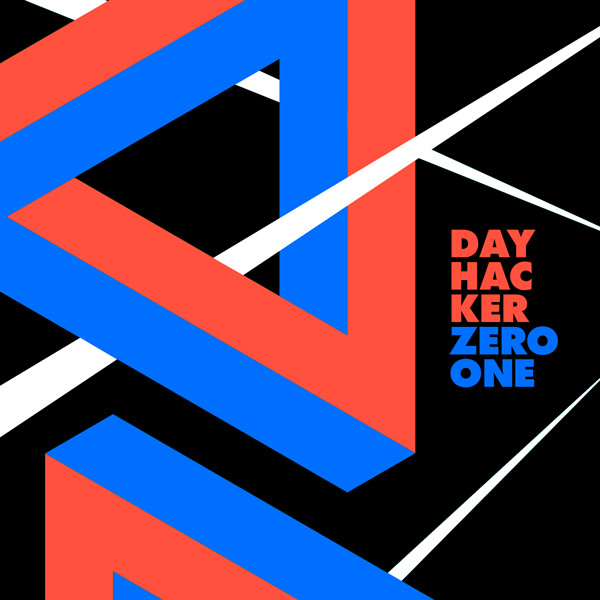 Coming to us from right next door…or, at least pretty close by in the same city we’re now based in, know & love – Day Hacker is a five piece band from Ottawa, Ontario that are electronically thumpin’ it up and raising a ruckus with their programs & electro-gear on the new EP Zero One.  They make it tough for me to not support’em, I’ll say that for sure…I dig me some electro – that’s a given…and I certainly don’t wanna piss off my new neighbours any more than I usually do when moving to a new home…

That being said…Day Hacker I’d surmise is more than likely still finding their feet underneath them and a relatively young-band in terms of how long this project has been recording and making music.  That’s just a guess on my part…I could very well be wrong – but I’m thinking due to what I’m hearing on the Zero One EP that there’s still a lot of room for growth in this band.  Limitless potential as well – don’t get me wrong; but yes…also a lot of room to grow, expand and evolve this sound into a more dynamic version than where they’re coming at it from right now on Zero One.

To be fair to these Ottawantonians…I actually just gave a friend from my old home province of BC very similar advice for the electro he’s currently making, which was the first thing that sprung to mind when hearing “Techno Spaceship” start this new record.  This all speaks to my point – so bear with me…

Basically, I mentioned that as an electro-artist…you’ve gotta consider your audience a little more than perhaps any other genre out there.  Doesn’t matter which part of the electro-gambit you identify with, whether it’s House, Dance, EDM, IDM etc. etc. and so on – innovation isn’t just important in these genres – it’s exceptionally crucial to establish an impact and make it sound like something we’ve never experienced before.  Old-timers like myself who have seen, witnessed and heard the birth of the genre with Aphex Twin all the way to the innovation of the genre with DJ Shadow, to the eventual modern-day reality of Deadmaus…have pretty much experienced it all at some point – and chances are we even have some of those very same Korg-toys and internet-programs that lead to the same sounds, results and combinations.  This is why I say it’s tougher for the electro-circuit – because you can’t just hit the strings of a guitar and let them ring out & have the whole sound come out differently than the person that just did the exact same thing before you; when you do this in electro-music, things just sound similar.  So really…I suppose the short version of what I’m saying is that starting any FIRST track, like “Techno Spaceship” or any other first-experience with electro by anybody out there, with a solid kick-drum beat of anywhere between 80-120bpm isn’t going to create the excitement you’re looking for – it stands a much better chance of inducing a straight-up yawn for those that listen.  It’s a complete risk when you serve it up as a first experience on a new record; the impression quickly becomes one that suggests you’ve already heard what you’re about to hear all over again.  Some people find comfort in that…and there’s also no doubt that electronic-music as a whole, thrives on repetition through programming.  Your reaction to “Techno Spaceship” might be totally different than mine…and if it is, I’d say there’s also a superb chance that you’ve got a whole lot less grey in your beard than I do.  I can appreciate that there are a whole host of other sounds in this first cut that react & respond to the beat, such as the brilliance of the rubbery low-end synth-bass groove…I’m just saying…Day Hacker is taking a risk right away by keeping it almost too simplified at the outset of Zero One.  It’s hard to imagine the necessity of all-five players in the band needing to be involved on the opening track that sounds as if it could have been compiled by the strongest one of them.

“Grasshopper Segue” immediately follows and earns nearly the same critique.  It’s a ‘segue’ – so it gets a little slack…but the repetition here is missing that dynamic-something that’s going to make it pop-out a lot more than it does.  It doesn’t experience much of a twist on the beat until about two-minutes and twenty-seconds in – and the entire track is over before two-minutes-fifty.  So for thirty seconds, you get a bit of change-up…but at the beginning of Zero One still – I’m feeling like I need a lot more from Day Hacker here.  Even the drum & bass and ambient-electro crowds would be asking for more than what we’re getting at the outset of this EP.  I like the textures and the tones they’re choosing…but there’s still something a little bit too flat in the compositions themselves here at the beginning of a six-song EP that’s going to lead people enthusiastically into the other four tracks to follow.

As “Peppered Drone” begins and keeps you waiting for the innovation throughout that first minute – again, you can hear that Day Hacker is still testing the waters and at the beginning stages of their career.  Nothing wrong with that…I feel like I was addicted to the same kind of sounds and repetition in my own experiences making electro at first – and eventually it does evolve into something more over time.  The dramatic tones of electro bursting out around the two-minute mark are okay…but chances are you’ll feel the same as I did about them, in that they are okay but not enough to be outstanding.  There’s a chance you’ll find them actually a little-bit towards the grating side as well – once the track started past the three-minute mark, and the track began to display some real ingenuity in the beat it was creating – I kinda felt like the entire song would have been stronger without these bright-tones at all.  Mix-wise, they’re nearly killing the rest of what’s happening in the track…with their offbeat tones, it becomes just about all you can focus on when you’re listening.  So if you enjoy’em, then you’ll love “Peppered Drone” – if you don’t though…you’ll be living for that final minute & a half to come around where Day Hacker finally removes them and shows you and your earholes a little mercy.  At nearly six-minutes in length, it’s tough to argue that Day Hacker isn’t asking a lot of you in sticking with them for the entire duration of “Peppered Drone.”

Of the set, it might be “Manic Moog Blocks” that impressed me the most.  For minimalist electro – this really hits the spot.  Arguably a lot of the Day Hacker recipe being used is still much the same – but I think a good case can be made for the way that this track feels like it moves more fluidly than say, how the others have felt more static in their programming.  “Manic Moog Blocks” also has a ton of emotional depth in that movement and the choice of tones here…the subtle beat & percussive elements work wonders, like a Thom Yorke track does.  Honestly, after a couple of listens through the album…I was pretty much sure this one had shifted past everything I’d heard so far and straight into first-place in this experience with Day Hacker’s music – maybe I just appreciated how its overall mood seemed to match better with my own today…I’m not even sure that I can put my finger on it myself.  They’ve done really well with this track though – “Manic Moog Blocks” has a real enveloping, subtly-intense atmosphere to it that I really appreciated.

& after a quick step into the glitchy, bizarreness of “Shephard Tone” – you slyly bounce out of it and into Day Hacker’s final track on the record, “Organic Music Box.”  This final cut starts-up smoothly before it backs off into a breakdown and back into their signature synth & beat grooves.  There’s something just a little off in the low-end sound…the deepest bends tend to sink one final octave too many to make enough sense with the rest of what’s happening – but the rest of the electro swirling around it is the stuff my dreams are made of.  I love the way this one works as far as the composition and layout goes…and really, I’ll take that one extra grim-note in the low-end frequencies if it means I can have the rest happening around it come out sounding as golden as it does.

So there you have it; it’s a little mixed in reaction – but I think the important thing to remember is that Day Hacker is still just finding their way, and there was bound to be a stumble or two like any of us along that journey to the recording booth.  They’ve got highlight-worthy ideas on display from halfway on through the Zero One EP that indicate the band is certainly on the right path to finding their own place in electro – and I think the potential still exists for Day Hacker to really do some incredible things in the genre based on everything I’ve heard.  When they concentrate on what makes them unique, they shine and shine bright – all else can be forgiven…I’m confident they’ll find the right path for their music in due time.

Find out more about Day Hacker from their official Facebook page:  https://www.facebook.com/iamadayhacker