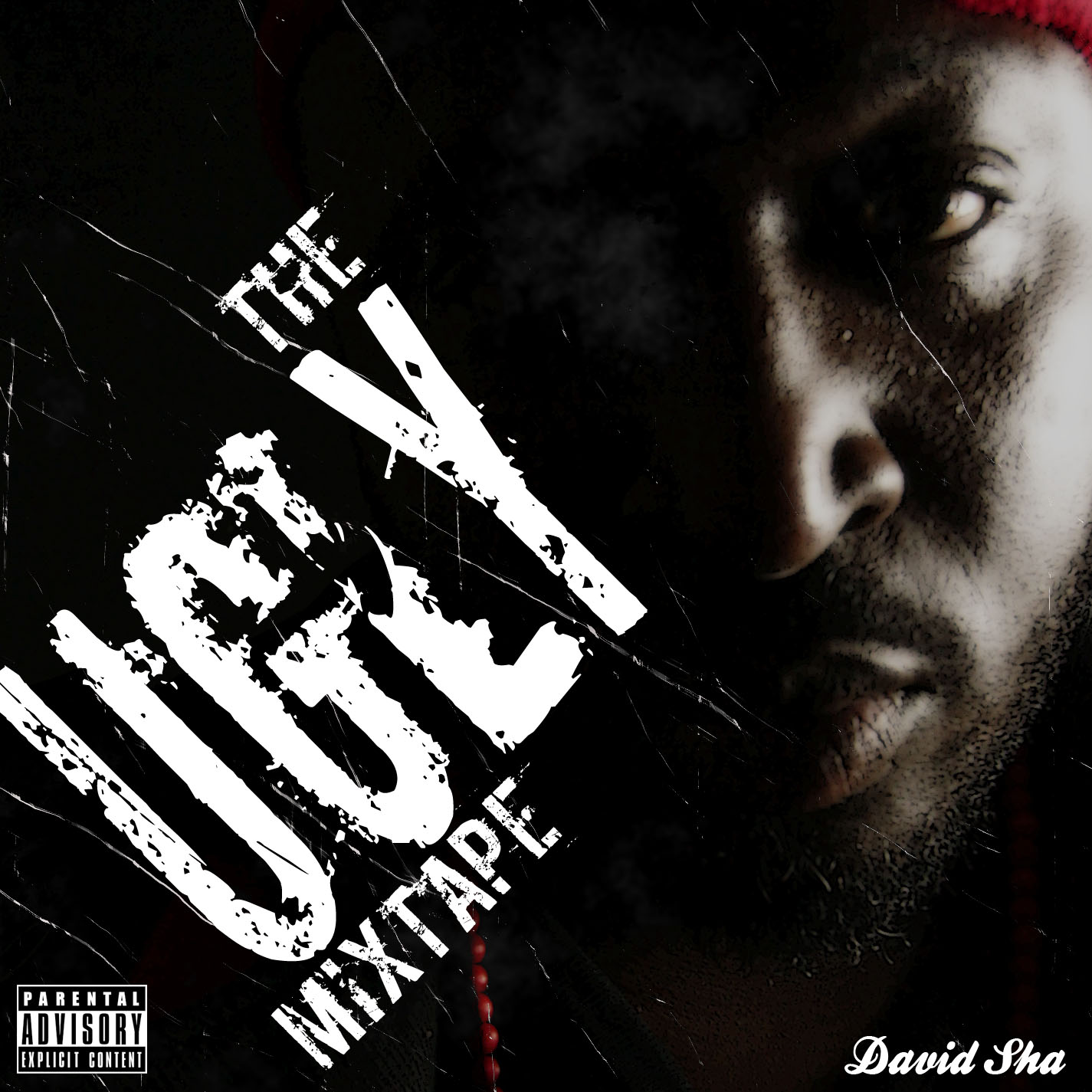 I can definitely tell you that David Sha has put together something pretty damn interesting here. From the moment The Ugly Mixtape starts out, you get create & highly innovative vocals, excellent music-samples and rhymes that are clearly thought-out to the nth degree. As “The Transition” sets the pace of the album to follow, this opener has all the right moves with a jazzy-beat that captivates and a seriously unique & committed performance from David Sha. Tackling everything from personalized self-reflection, to perspectives on religion, reincarnation and its relation to us all; the track concludes with a ton of shout-outs, old-school-style.

With a quick switch in style & sound, “Rakim Allah (Feat. K Rino)” is an clever track; written in a minimalist style, this cut relies on the vocals to carry the weight for the majority of the song. The opening vocals took a minute to grow on me, but truthfully so did the ones in the opening cut when “The Transition” began this all. But if there’s something to be said about great sampling, David Sha has found plenty of gold here. I can easily name you a ton of major-label artists who put out something with a sample that doesn’t quite sound right on those first listens through until you get a clearer idea of what the artist had in their overall vision. Then you end up on those second, third and so-on listens – and everything clicks together and the sounds are all more easily accepted by your ears; much of what David Sha has put together here on The Ugly Mixtape is like this.

And that being said…the most common reason for rejecting something upon a first listen? Because it sounds truly NEW. If there’s something to be said for The Ugly Mixtape, in my opinion it’s certainly that you won’t find much else out there using creative combinations like this. David Sha is a major mixture of some real artistic pursuit here and displays that big time on tracks like “Teasin’ Bitch,” and “Own World;” he could just as easily dip into the R&B genres as he can bust rhymes. “Teasin’ Bitch” is completely addicting for its kick-ass bass-lines; sampled or not – whoever laid that down has some astonishing talent!  “Own World” is an absolutely wicked cut – this song has a perfect pulse, rhythm and vibe that really hits home. Lyrically David Sha puts together complex rhymes and raps about tales of equal complexity; the ending…absolutely indisputably brilliant.

A low-end rumble and bright vocal elements bring up the good-time vibe another notch on “The Holidays (Feat. Terry Thomas).” I don’t know quite what the extent of these collaboration is or how deep they run on the different ones featured throughout this mixtape – but they seem to be working well in favour of David Sha on The Ugly Mixtape as they seem to hit home consistently. Case in point – check out the ingenious track “I’m Nice (Feat. EQuality)” and before anything goes further – big shout out to EQuality for one of the best monikers I’ve ever read or seen created. The skills are clearly there to back it up as well; the immediate opening of “I’m Nice” had me completely in a grin – this was an incredibly diverse tune in comparison to the rest of which were already plenty versatile. David Sha has done a lot with some excellent beats and sparkling-sounds, creating real atmospheres and unique sonic-textures that your brain can actually CHEW on.

I mean…how SMOOTH does it get on a “Broken Record?” This highly inventive track featuring Riders Against The Storm plays out brilliantly through the samples and performances from every emcee that steps up to the ol m-i-c. It’s definitely an inspiring cut on The Ugly Mixtape and a concept on full display here in this one song. Love the opening and ending of this track as well…perfect needle-scratches that were pretty much the icing on the cake; the final touch to make this as consistent in theme, sound, lyrics and message all the way through from start to finish.

I mean DAMN dude! Did someone just mention something about having to bring the defibrillator around, just in case of emergencies or somethin’? Well alright then! It’s established – David Sha has no problem gettin’ his freak on. From what I’ve read on the internet as far as movie-reviews go – you ladies out there might prefer listening to the adventurous nature of “Sex Swings” instead of trying to pretend that 50 Shades Of Grey is a good movie…just sayin.’

“Ice Cold,” second to last song on The Ugly Mixtape, has one of the most addictive verses on the entire album. The chorus basically echoes how I feel about the verse, which honestly kind of brought around another sly grin to my chin; it’s undeniable – that flow truly IS “Ice Cold,” so hell, why not back it up by actually pointing it out through the chorus on this cut where you’d have to be completely DEAF to not have heard that already!

Big fan of everything Sha attempts and reaches for on the final song “Ocean.” Don’t get me wrong…I’ve been pretty damn impressed with his combinations and creations all throughout The Ugly Mixtape…but honestly! What…..do…..we…..have…..here?

This final cut really does a lot to showcase what an artist David Sha really is. “Ocean” combines incredible R&B aspects through the vocals – excellent melody, fantastic notes and exploding, bright tones in all the right moments. You know Bandcamp is a funny place sometimes. I’ve spent this entire time listening and looking at the album art with David Sha’s face on it giving me a stare-down so supreme I’ve had moments where I thought the picture was going to take a physical SWING at me. Hearing a track like “Ocean,” or just in general the soft & smooth approach he brings into his music and album weren’t exactly what I was expecting when I saw him staring that intensely at me for the very first time.

But I suppose that’s about the best way to sum this all up anyhow…it’s extremely intense. Whether it’s a slow-jam, mid-tempo or quick – the music is thick & rich and truly encapsulates these lyrical concepts. David Sha is certainly onto something here – I’ve literally enjoyed every moment of listening to this record and I think that by way of its versatile and exotically-diverse nature…these songs will hold up solidly over time.

Check it out for yourself at Bandcamp: https://davidsha.bandcamp.com/album/the-ugly-mixtape