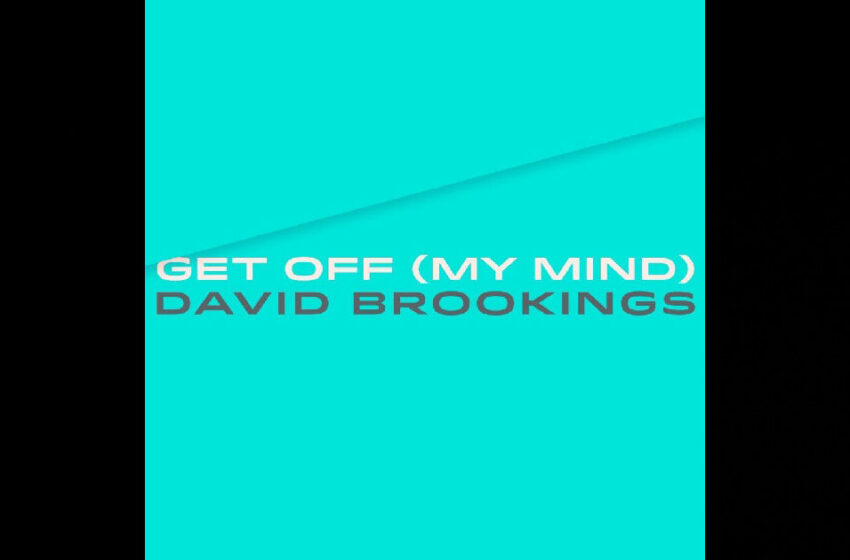 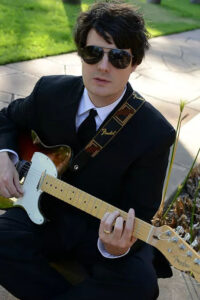 David Brookings has been rocking strong for quite a while now, and it certainly sounds like it.  Heck – we’ve even got photo evidence of that very fact right here in this review – that promo shot you see here might be new to us, but if you’re lookin’ real closely at the cover of an album he put out called The Maze about eight years ago…you’ll see one very familiar lookin’ dude.  Word on the street is his career traces back even further than that, to around the turn of the millennium…and that’s great news for us – clearly from what you’ll hear in this new single “Get Off (My Mind),” it’s obvious David knows his way around the studio & how to get the best out of himself & his music this far in, which makes listenin’ easy for us!

In the scattered notes I’ve got here on top of my desk, there’s mention of The Turtles and The Monkees being an influence on David’s music – and that’s another thing I think you can absolutely hear within a song like “Get Off (My Mind)” – but you know, updated for the here & now just enough that you Indie music fans shouldn’t have a single problem loving every single second you’ll hear in this tune.  Think along the lines of stuff like…Fountains Of Wayne…or like…Graham Walker with a little less rockstar persona and a lot more humbleness…maybe even something like Grandaddy, or Band Of Horses at their most playful might not even be all that far removed.  Or like you’re hearing some kind of strange & beautiful combination between Weezer and Supertramp – feel free to pick any analogy you like – but if you’re pickin’ up what I’m layin’ down here, you understand that David’s grabbed elements of his sound straight from the golden era on foward, and shined it all up perfectly for your enthusiastic consumption today.  Sweet deal right?  You bet it is – I freakin’ love this single.  It’s like…man…how do you even put this…it’s like…”Get Off (My Mind)” has all the essential ingredients of a gentle Pop/Rock song that supply the catchiness, and all the right additives of uniqueness through his vocals & lyricism that twist this straight-ahead melody into something much more expressive, colorful, and mercilessly addictive.  A lot of people tend to wonder what kind of music I’d be inclined to play outside of my routine in reviewing music – and there’s perhaps no finer example that the shimmering & shiny sound of this song & melody right here – “Get Off (My Mind)” is a song I’d never ever get tired of personally, it’s got what I’m essentially always on the lookout for in the tunes I listen to.  David’s got plenty of personality in the sound of his voice, and both complements/rivals that through the smart imagery of his lyricism – he’s got excellent ideas on how he sings with layers & harmonies…again, if you know your classics and the roots of Rock, you know this vibe well – and it gives “Get Off (My Mind)” a naturally comforting feeling.

From the cleverness of the piano accenting the melody, to the steadiness in the rhythm section, to David’s stellar vocals, and a sentiment loaded with endearing sweetness from the them to the sound – I dunno…call me crazy – I think Brookings has basically made it impossible not to love him on this song.  It’s remarkably accessible with its hooks, creatively vivid through the writing, and executed with all the right pieces in place from production to performance.  I’ve been around these speakers of mine plenty long enough to know better than to complain about anything I’m hearing here – Brookings has had me reaching for the volume knob to turn “Get Off (My Mind)” right up to the rafters at every opportunity I’ve had to do it this week.  Sounds like there’s a whole bunch more awesomeness planned for his future ahead as well – “Get Off (My Mind)” comes from the brand-new album called Mania At The Talent Show, which is rumored to be arriving online officially this November 12th.  You can also check out another sample of the upcoming record through a single called “Hard Times” as well, which gives you a bit more of an idea of what you’re in-store for overall between having a listen to both.  A slower cut that’s got a grounded perspective on what life has been like lately – chances are, you’ll find yourself relating to the lyricism of “Hard Times” and feel like this track basically nails how we’ve all been feeling.  Really well-played & smartly constructed tunes though…David’s got himself listed as Alternative Rock, and I ain’t disputing that to a degree…but I will say, he’s gonna find a heck of a lot more acceptance over in the Indie Rock section based on what I’ve heard in these two tunes.  In any event, all labels & genres are pretty much BS anyway…what really matters is the material itself, and Brookings has extremely strong stuff that’s guaranteed to keep people coming back for more after a mere listen or two to get a sample.  I’d probably be inclined to say that “Get Off (My Mind)” has got that inherently natural melody that’s gonna instantly make it a hit with listeners out there, whereas “Hard Times” gives you a glimpse into a deeper cut from the David Brookings catalog.  In either gear, he seems to find success without a hitch…yes the accessibility of a song like “Get Off (My Mind)” and its more playful theme is going to make for quick acceptance with the people in the court of public opinion – but I’d be just as willing to bet those very same listeners would hear a song like “Hard Times” and be equally compelled by what they hear.  Facts are the facts – David’s a great writer and a clever artist with a whole unique appeal of his own…his colorful hybrid sound and grounded, insightful, and poetic songwriting is professional, profoundly passionate, and incredibly pleasing to listen to, whether he’s in a more upbeat gear like you hear on “Get Off (My Mind)” or going low-key & mellow like he does on “Hard Times” – he’s reveals a genuine gift for communicating emotion through music in ways that’ll resonate & make an impact on ya.

Find out more about David Brookings at his official website at:  https://www.davidbrookings.net