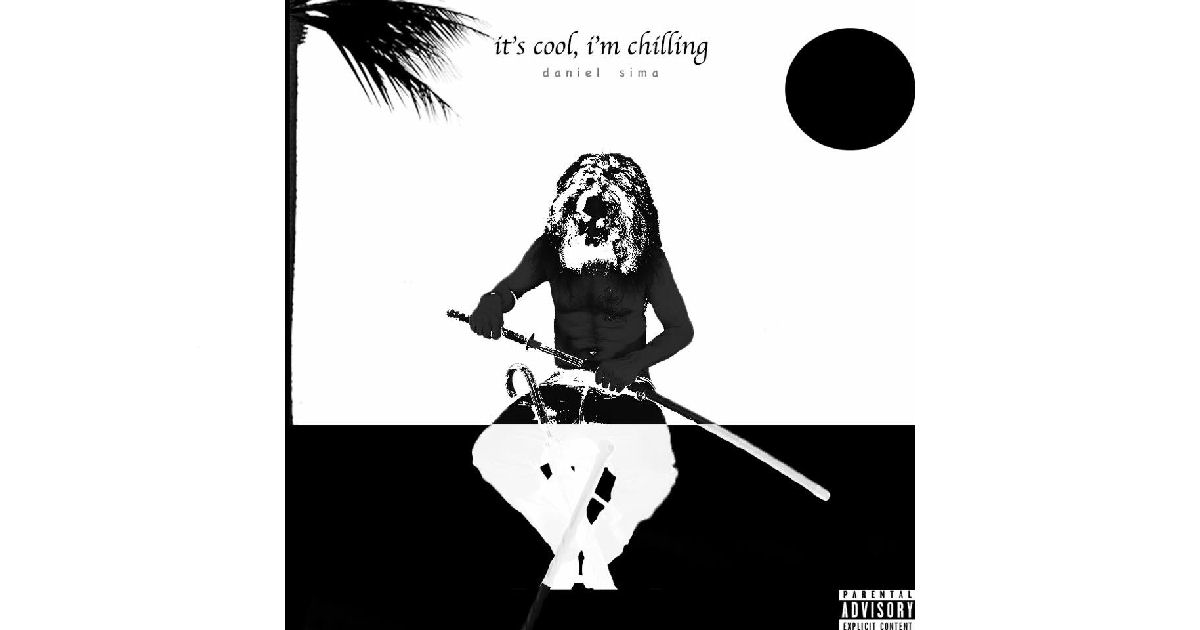 Alrighty…let’s find out what this emcee has got in-store for us all when he drops his new mixtape called It’s Cool, I’m Chilling…which according to what I’m seeing on social-media…should be coming out real soon-like – apparently later on in the very month we’re in now.  Dude’s out there shootin’ videos and getting the gears all revved up for the official release, and here we are with a sample of what’s up.

Four different cuts here in the mix, four different producers, four different styles of sound, but ultimately, one man on the mic that’s keeping it all cohesive.  On the first track I checked out – “MIA” produced by King Jubee & Queen Kayy – I was immediately impressed not just by the way Daniel Sima raps so confidently, but the content itself.  As I’ve said many times, we’ve all gotta write about something – and usually when I’m saying that it’s because someone has written a new tune about the new blender they bought from Walmart or the latest food photo they posted to Instagram…you know…a comment more designed for those that have the platform but choose to use it for some really bizarre stuff.  An artist like Daniel proves there’s conscious thought happening on the ol’ m-i-c with the superb & socially-aware “MIA” – he’s spittin’ truth after truth on this cut.  Whether he’s keeping it real through his own perspective on the heavy topics & themes he’s courageously bringing to the surface, or giving you the details on stories he’s witnessed & seen himself through the imagery in his words – Daniel puts the power into lyrics & adds weight to the core concepts with the performance he brings to “MIA.”  Beat is tight, smooth & well produced…no complaints there either; as far as first impressions go, I’m stoked on what I hear from Sima…dude’s using his platform to raise awareness and drop knowledge bombs – I’ve got mad respect for that.  You can hear the character & charisma from this emcee in all aspects of his performance…he’s got his vocals tinged with the slightest of effects from what it sounds like, just enough to bring out the melody in his flow that much more so we can really hear it, not overusing production, but making sure it enhances & strengthens the vibe on “MIA.”  It’s a cut as true, real, & raw lyrically as it is slick in sound, produced into a chilled-club style that surrounds these themes perfectly.  Hooks are somewhat of a secondary factor here…or perhaps arguably the ultimate driving force; it’s not like you’ll pick out any one particular part of “MIA” so much as be captivated by the whole song entirely.

“ALL Children” confirms that this emcee has chosen to use his powers for good.  Dude’s speaking out on important social issues that affect us all, presenting his thoughts in a rational was that we can seriously appreciate, and hopefully, universally understand.  Some of my favorite lyricism from Sima exists on this cut…I think he does a great job on the four tracks I’ve got here from It’s Cool, I’m Chilling, but he really adds some incredibly insightful words into “ALL Children” that hit the mark bang-on.  Unique beat too!  Like, for real…it’s a…what is that anyway?  A flute-led melody?  I mean, it’s a synthesized sound & all – but ain’t that what the hook in the music is?  Now…think on back to the last time you cranked up that FLUTE-LED BEAT homies…you know, back in the day when you were crusin’ down the strip and…

…and yeah RIGHT – c’mon now…ain’t that many flute-led cuts out there!  In any genre for that matter, nevermind Rap where it would be far less typically found.  So props to Daniel for working with music & beats that’ll help separate him apart from the rest out there – and props to DeCicco for the production on this particular cut, “ALL Children” comes out with a killer mix of bright-vibes and low-end rumble.  Sima plays this whole track smartly – stepping it up instantly with a bold, rhythmic hook in his vocal-flow being the first thing we see before grinding out some hot bars that remind us beauty is in the eye of the beholder.  Seeing the world from this emcee’s perspective would be a great thing…we could use a few more Daniel Simas out there in the world, this I’m sure of.  Some of my favorite moments on “ALL Children” are nearly spoken-word…I mean it still rhymes & all for the most-part, you can call it Rap if you want – but the point is that this cat knows exactly when to flip the script & transition on the mic in different parts throughout his performance that bring the right energy to the meaning & message behind the words.  When he changes up his style, sound, tone, approach…any of that stuff…it gets us reinvested in what he’s rapping out and ultimately, actually HEARING the words he’s spittin,’ not just listening, you feel me?

Honest, relevant, and perhaps all-too-relatable at times – songs like “MIA” and “Poison” both have their moments of taking on Big Pharma…you get your first dose with what’s on “MIA” and a much more direct hit with “Poison,” where that’s the sole focus of the lyricism and Daniel Sima’s ire.  Produced by Beat Boii – this is a synth-flute led melody too isn’t it?  What’s going on here?  Alright…”Poison” is a bit less flute-inclined and closer to the synth-end of that sound…but you get the idea, this cuts also working that clever contrast of bright & airy melodies on top while expertly digging into the low-end vibe.  I suppose it could be a theramin creating that sound too…but like, a real controlled one.  Anyhow – whatever it is, it’s cool.  I guess the point is once again ultimately that Sima’s reaching for sounds that ain’t typical – and I think that’ll pay off.  While the combinations are unique and each cut still has its own vibe, there’s more than enough for fans of Rap/Hip-Hop to latch onto here when the beat & low-end infusion come rumbling in, plus once you factor in the vibrant charisma that Daniel puts into his performances, you definitely wanna keep listening.  “Poison” has got a ton of important things to say…this ARTIST has a ton of things to SAY – and my ears appreciate that.  Sima tries a whole bunch of ideas within this one cut, switching it up several times along the length of “Poison” as it plays – but make sure you really check these words out & absorb them because he’s making a ton of relevant points about the system that may apply to YOU as well.  Or someone YOU know or someone YOU love – the “Poison” he’s referring to on this cut has infiltrated almost every aspect of our world and become BIG BUSINESS out there for the suits’n’ties.  And just like you can expect from The Man – there ain’t no heart or interest in your health & well-being…we’re commodities and cattle to Big Pharma…walking price-tags and easy-marks because for some weird reason, most of us are all addicted to the idea of continuing to LIVE.  The thing is, what they’re sellin’ ya is a different kind of death – a “Poison” that’ll consume your life in multiple ways…major props to Sima for having the stones to call this all out like it truly is on this track.

Keep it natural y’all – Daniel says it best himself:  “I grow my own herbs in the woods outside my home.”  Amen homie, amen.

On the final track…sounds like our main man got caught up.  “Ms. Serpentes” is a cut about the darker-side of emotions, love, lust, and life thereafter…both detailing the events that lead to the thoughts & feelings Sima’s spilling into the microphone and explaining the aftermath of the impact later on down the road.  Of the four cuts, “Ms. Serpentes” becomes the anomaly somewhat, due to the vastly different & more personalized theme of this song compared to the rest…but it’s certainly no less real than the others.  I’d also argue that the cut produced by Mxdnight might very well be the tightest & most engaging of the bunch…the atmospheric swirl and subtle beat of this track is wickedly effective.  There’s also a chance I might even advocate on behalf of the way that Daniel approaches this cut vocally as well – which is also essentially totally different than what the other three tracks contain too.  If you thought the man was putting the character into his performance before – well, wait til he lights up the mic with “Ms. Serpentes” and takes the art in what he’s doing vocally to the next-level.  Or at least a different level…you see, that’s the thing; for me, I found the way he sang/rapped this song out was fantastic – but I can also understand the flipside of that coin and how the bold uniqueness of this particular cut could really catch some people off-guard.  Daniel’s undeniably taking all kinds of chances with his performance on “Ms. Serpentes” – but in my opinion, the dude found all kinds of ways to make this track completely wild to listen to through the expressive way he makes his moves on this tune.  The thought-provoking, pensive sound and clever pacing once again allow for the words to really come across powerfully…you can feel that mix of frustration, rage, pain and emotion in Daniel’s tone and the stylistic way he throws himself into all-aspects of the vocals on this cut…you can tell these emotions come from a seriously real place where the feelings are still intensely raw.  He’s mad here…not just at the girl in question, but also ultimately taking responsibility for realizing there were things he should have known all along & going against his gut instincts.  Wild tale of life & love…all set in a vibe that really makes an impact on ya.

Solid mix of ideas and every one of them comes out sounding like it all comes from a genuinely real place, perspective, or aspect of what Daniel Sima experiences in his world daily.  Seeing life through his lens is quite a gripping experience overall – dude’s got a great head on his shoulders and a powerful mind that could authentically become a leader in the wave of change the world so desperately needs.

Find out more about Daniel Sima at his official page at Facebook:  https://www.facebook.com/danielsimarule